Cole Hamels is going for his 100th career win tonight, Raul is on the verge of history, and Mickey Morandini celebrates an anniversary.

The Phillies currently have the 12th worst record in baseball, and probably need to lose at least 7 of their last 10 to have a shot at a protected pick.  That would give them 88 losses.  Losing 8 of 10 for 89 losses would almost certainly do it: 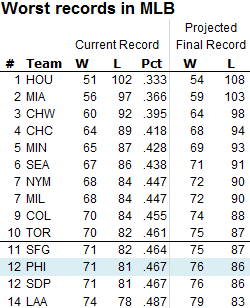 Nevertheless, he has 28 home runs on the year, the 2nd highest total by a player 41 or older, behind only Ted Williams' 29 in 1960. Raul has 9 games left to tie and possibly pass the mark.

Delmon's Gone, or Is He?

We knew when he was signed that Delmon Young was essentially John Mayberrey Jr. at the plate (but worse in the field and on the bases), so it's not surprising that their stats are so similar this year.  It's like Delmon is still here, at least when JMJ bats. Surly antisemitism has been replaced by mermaid courting, and in the place of a weight-clause physique is a jeans-selling athletic build, but the hitting is the same, and it's not very good...

In fact, also over the last two years:

And their best seasons were a year apart (Young in 2010, Mayberry in 2011), but they are still very similar when we look back over the last four years:

The 700 Club: Chooch and Rollins

Not so much a milestones note as a comparison of career arcs, but Carlos Ruiz is 2 hits away from 700 for his career. Jimmy Rollins got his 700th hit 9 years ago in 2004, 2 years before Chooch even made his major league debut. 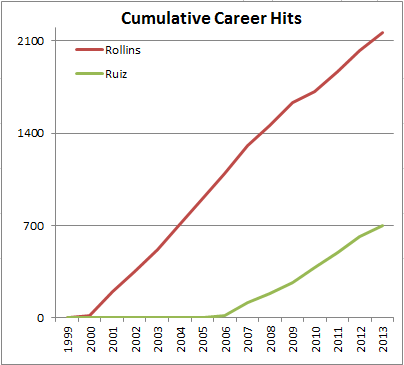 (by the way, unrelated, but apparently Ben Revere appeared in a segment on the The 700 Club TV show, as explained at the 700 Level, just to confuse things)

It was 21 years ago today that Mickey Morandini turned an unassisted triple play. I'll let wikipedia describe it:

In a game against the Pittsburgh Pirates on September 20, 1992, he turned an unassisted triple play. In the sixth inning, Morandini caught a line drive off of the bat of Jeff King, touched second base to put out Andy Van Slyke, and tagged out Barry Bonds coming from first base; the Pirates went on to win the game, 3–2, in extra innings. It was the first unassisted triple play since 1968, and the first in the National League since 1927. Morandini was also the first second baseman in National League history, and the first in the regular season, to turn an unassisted triple play; all previous occurrences were made by first basemen or shortstops. The only other second baseman to achieve the feat prior was Bill Wambsganss, who turned a triple play in the 1920 World Series.

Chase Utley- On Tuesday Utley tied Cy Williams for 7th on the Phillies all-time list, at 217.- In the same game he also passed Johnny Callison for 10th most total bases in team history.- Utley's next HBP (6th this  year) will tie him with Fernando Vina for 18th all-time, with 157.- Three more doubles (27 total) will make him the 8th Phillie to hit 300.

Jonathan Papelbon
- One more save will make it 286 for his career, which will tie him with Rod Beck and Jose Valverde for 27th most all-time. 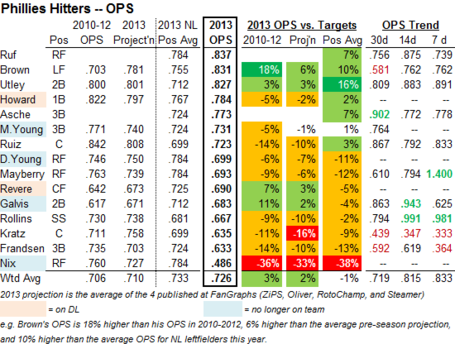 Rollins has been hot for the last 2 weeks (.991 OPS), and has also hit well over the last week, as has Utley.

Two of the bright spots of 2012, Erik Kratz and Kevin Frandsen, are finishing with fairly disappointing seasons.

Phillies Hitting vs. Last Year and vs. Mets

The Phillies have managed to score 3+ runs slightly more often than average.  And if the pitching had been better, that may have translated into some additional wins.  But they are only 13-16 when scoring exactly three for example.  Even last year, they were 15-10 when scoring three.

They are exactly the middlest in all three stolen base categories: attempts, success rate, and steals. 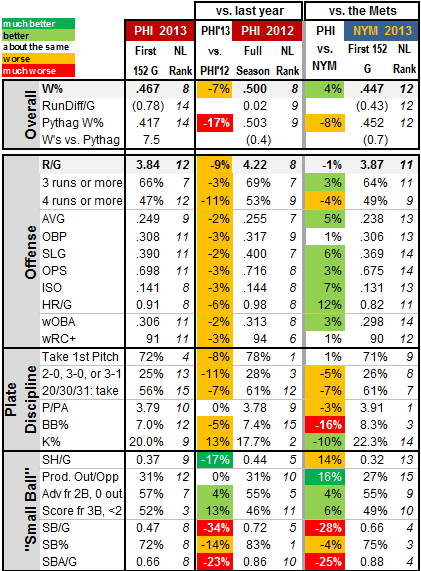 Phillies Pitching and Defense vs. Last Year and vs. Mets 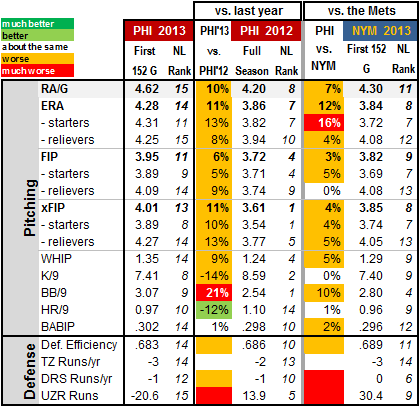 The Phillies have still outperformed their pythagorean projection by more than any team in the NL (7.5 wins). 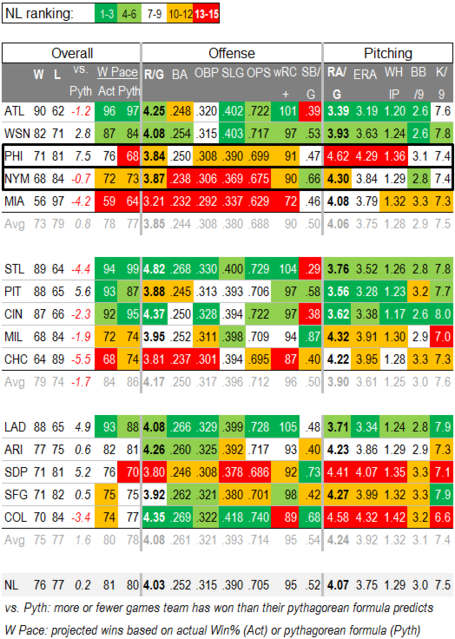