For their last home date of the 2013 season, the Phillies offered fans a look ahead and a look back. The forward piece came in the form of 2014 schedule magnets (and the news from earlier that Ryne Sandberg will return next season as manager on a non-interim basis). The look back came in a finale that was almost perfectly representative of the miserable season now concluding: feeble hitting, ugly defense and a frustrating loss to a Mets team without David Wright that nonetheless leaves Philadelphia with a sweep and a victory in the season series.

Cliff Lee has handled the Mets with ease over his career, entering Sunday’s game with a 6-2 record and 2.40 ERA in 11 starts. Picking up where he left off from last week’s 14-strikeout masterpiece against the Marlins, he needed just ten first-inning pitches to strike out the side. The Phillies staked him to a 1-0 lead in the second when Domonic Brown walked and came around to score on Kevin Frandsen’s two-out double.

The Mets tied it in the fourth on an Eric Young single, Wilmer Flores double and Andrew Brown groundout, and there it stayed until the home sixth.  Jimmy Rollins led off with a fly ball to right-center field, and in his Jimmy Rollins way sort of pulled up before reaching first base. But Brown flat-out missed the catch, and suddenly Jimmy had to race for second. The throw beat him, but clanked off Daniel Murphy’s glove. Three batters later, Dom Brown singled him in. The Phils had a chance to do more against tiring Mets starter Carlos Torres, but with the bases loaded Cody Asche fanned on three pitches and Frandsen just got under one to fly out.

The Mets went ahead to stay in the seventh. With one out, Juan Lagares beat out an infield single. (A quick digression regarding Lagares, whom the Mets love for his defense but hits for squat against 28 teams. He entered the day in a 4 for 46 slump, but had three hits Sunday to raise his average to over .400 against the Phillies. I wish him chronic ass itch.)  Anthony Recker followed with a fly ball to right center that Darin Ruf and Cesar Hernandez both pretty much gave up on, as it fell in for a double. That brought up Wilfredo Tovar, making his major league debut after having been called back from his home in Venezuela when Ruben Tejada got injured. Need I even tell you that, after falling behind 0-2, Tovar got his first major league hit on a high Lee fastball? Or that the geologic-time slow Recker scored from second when Dom Brown misplayed the ball?

The Mets added a run in the eighth against B.J. Rosenberg on an infield single and a two-out walk followed by yet another hit from the execrable Lagares. The Phillies got that run back in odd fashion in the bottom of the inning, as Carlos Ruiz singled, moved to second on a Brown walk, advanced to third on a wild pitch and scored on a sacrifice foul pop—racing home as Lucas Duda caught Ruf’s fly ball, tumbled over the railing and couldn’t recover before Chooch came home. Brown moved to third, but was stranded when Asche struck out for the third time.  In the ninth, the Phillies got the leadoff man on when Frandsen singled, but after a Freddy Galvis sacrifice moved the runner to second, closer Latroy Hawkins struck out Hernandez and Rollins to complete the fans’ representative experience.

Today's attendance lifted the Phillies just above the three million fan mark for the seventh straight season. If this is what's on offer in 2014, it's hard to believe there will be an eighth.

Fangraph of Can We At Least Keep Sucking Enough to Get a Protected Pick? 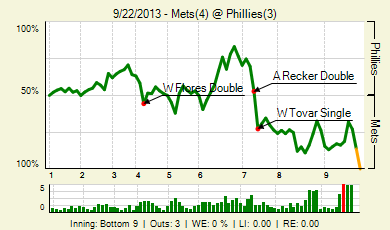