Just When You Thought It Couldn't Get Worse: Halladay Diagnosed With Genetic GI Disorder

The season of woe continued last night, with Roy Halladay disclosing that he has a genetic GI disorder.

Share All sharing options for: Just When You Thought It Couldn't Get Worse: Halladay Diagnosed With Genetic GI Disorder

When the mighty fall, sometimes they really fall.

Not only is Roy Halladay going through the worst season of his major league career.  Not only did he have major shoulder surgery in the middle of the season that made him miss three months.  Not only is he playing the last days of his contract wondering if he's ever going to pitch in the majors again.  Not only is he struggling to hit Jamie Moyer speeds on the radar gun.

But also we learned last night and this morning that Halladay has recently discovered that he has a "genetic diet-related illness that weakened his fragile state."  He revealed the information to the press last night, and it sounds like to the team as well.

The good news is that he now knows what it is and is taking medication for it.  The bad news is that he appears to be struggling in every way -- physically and mentally.  He looks terrible, he can't control his pitches, he has no fastball, and he seems to be bothered by things that would never have bothered the machine that was Roy Halladay until 2011.

What the future holds for Halladay is uncertain.  We know for sure that he is done pitching for the Phillies this year.  Chances are, we'll never see him in a Phillies uniform again.  It's a possibility, as both Halladay and Ruben Amaro Jr. said the perfunctory things they had to say yesterday about hoping he returns next year healthy and ready to contribute.  But, we all know the chances of that are miniscule.

When it's all said and done and we know the final chapter, the Halladay Phillies story is going to be a phenomenally interesting one.  2010 and 2011 were as good as it gets for a starting pitcher.  We will always have the perfect game and the post-season no-hitter, not to mention his all-around masterfulness.  But 2012 and 2013 were almost as bad as it gets for a starting pitcher.  Injury, ineffectiveness, illness, fatigue, decreased velocity, testiness, and now disease are the stories for these two years.  There's no word to describe it other than sadness.

According to Fangraphs, the Phillies lost out on Halladay's contract.  They paid him almost $76 million over 4 years, but he provided only $67 million in value.  Amazingly, $60 million of that came in the first two years, with him earning only $7 million net ($11 million in 2012 and -$4 million in 2013) in the next two.  These last two years, if they are the end for Halladay, are a sad coda to an otherwise spectacular career.

But, regardless of whether he performed up to value over the life of his contract, we'll always have this: 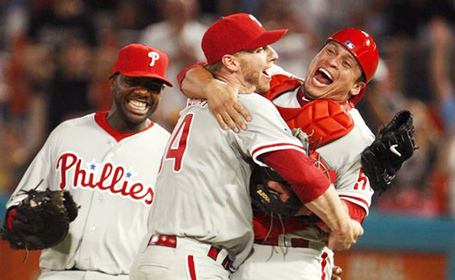 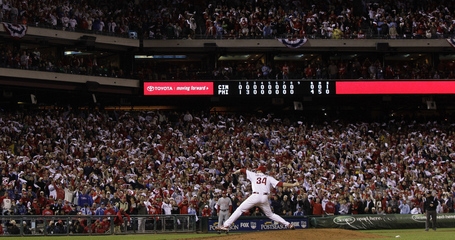 Get well Roy.  And thank you.