A Semi-Definitive Guide to the Phillies Looming Television Contract, Part 1: Get Rich...

"These days, a franchise's No. 4 hitter is no longer in uniform. The No. 4 hitter is the guy who negotiates the contract for the TV rights." - Scott Boras || "Oooh, I get a do-over!" - Ruben Amaro Jr.

Share All sharing options for: A Semi-Definitive Guide to the Phillies Looming Television Contract, Part 1: Get Rich...

One of the most intriguing and potentially impactful prospects the Phillies are eagerly awaiting isn't some athletic kid with a quick bat or a blistering fastball - it's the resale of the rights to broadcast their games on television. The agreement the Phillies ink to broadcast their games post-2015 will be the singular signing that shapes the face of the Phillies franchise for the next couple decades, and nary a player will be involved. As everyone's favorite player agent Scott Boras says:

In light of the exorbitance of the most recent recent large-market deal, the Los Angeles Dodgers' 25-year, $8.5 billion deal with Time Warner Cable and the off-season quickly approaching, this is an opportune time to assess the prospects of the Phillies getting in on the cable money bonanza. As TGP's soi-disant cable deal expert it's been suggested that I bring together my observations on the topic as it relates to the upcoming Phillies television deal. This post will serve as something of an introduction to the cable TV landscape as it pertains to the Phillies specifically, and all teams generally. Much of the content here has been culled from various comments made on previous posts, so it's likely that I'll be covering ground that is familiar to some of the more perspicacious TGPers, although I'll be covering most of that ground more thoroughly and with better sourcing.

I'm casting a wide net here to establish a foundation upon which I can hopefully build more detailed(!) future post going into the specifics of what to expect from the Phillies deal, perhaps foolishly including an estimate based on the various inputs that most correlate to the size of the cable deals we've seen over the last half-decade or so. This post will be split into two parts, the first being an overview of all the factors that tend to increase the value of broadcasting rights, potentially propelling the Phillies into the Dodgers/Yankees stratosphere. The second part will focus on the variables--many of them fairly recent developments--that may well act to prevent the Phillies, or any future team, from entering into agreements as rich as the one the Dodgers signed this winter.

Also, a caveat: I'm not an actual expert in this field. I find the economics of sports fascinating and have done a bit of reading and research on the topic, but any conclusions I draw in these articles are informed only by publicly available sources and my own intuition shaped by the same.

With that out of the way, let's get back to the thoughts of überberagent Scott Boras:

Boras predicts the Phillies' next TV deal will even eclipse the Dodgers' pact when it expires in 2015.

Well, that'd be a helluva thing. Let's look at how that might happen.

Essentially, live sports have become the Holy Grail of television revenues. In the current era of commercial-skipping DVRs, online streams, torrents, and general abandonment of cable, viewers of live events remain the last captive audience for advertisers. The top 10 rated television programs from 2012 were all live-events; 9 sport-related programs and the GRAMMY awards. From an ad revenue standpoint sports programming captures a large, attractive demographic (males, ages 18-49) that prefers to watch the event live, and is therefore forced to also watch commercials. This is why advertising slots for the highest rated sporting events fetch the largest fees. The more advertisers are willing to pay for that audience the more the broadcaster is willing to pay the content provider (in this case, the sports team), and so you have larger and larger local cable television deals.

In addition to the ad revenue there's a second revenue stream that broadcasters are increasingly relying upon, which is now dwarfing the actual ad revenue money for some of these broadcasters: retransmission (also known as "affiliate" or "carriage") fees (they're actually not all exactly the same, but they're similar enough that the differences are beyond the scope of this article).

Before I get into those fees, it'll help if I define some terms here. When I say "broadcaster," I'm referring to the entity that has the rights to a television program. Comcast SportsNet Phildadelphia, for example, is the current majority broadcaster of Phillies games. It is this entity that typically reaps the television ad revenue (although this is not true in the Phillies' case, as they sell their own television ads, a relatively unique arrangement in sports) and is able to negotiate the retransmission fees they charge the cable provider. The "cable provider" is the company the individual consumer contracts with to provide them the cable service; companies such as Comcast, DirecTV, Verizon, Cox, etc. To complicate things a bit, there are instances in which the broadcaster is also the cable provider for a local area (Comcast the cable provider, for example, also owns the broadcast rights to the Astros, Phillies, Cubs, etc.).

Retransmission fees are fees that the broadcaster charges the cable provider to transmit that broadcaster's content to all the provider's subscribers. ESPN is the classic example of how these retransmission fees have emerged as the largest revenue source for these broadcasters. ESPN charges cable providers slightly more than $5 per month, per customer, the highest fee in the industry outside of some individually ordered premium channels like HBO. As ESPN is broadcast into approximately 100 million homes this brings their haul from these fees to somewhere in the neighborhood of $6.0 billion a year. For comparison, ESPN's total revenue in 2012 was ~$9.1 billion; those carriage fees comprise nearly two thirds of their total revenue.

Regional sports networks [RSNs] like CSNPhilly operate on the same model, and they're also expensive to carry as far as retransmission rates go. The chart below from SNL Kagan via Buckeye Cable System provides a great comparison of some regional sports network retransmission fees. This is where the money that is going to find its way to the Phillies coffers is coming from. Incidentally, this fee structure these networks are exploiting is a large part of why your cable television bills have risen at a 6.1% rate, annually, between 1995 and 2010. 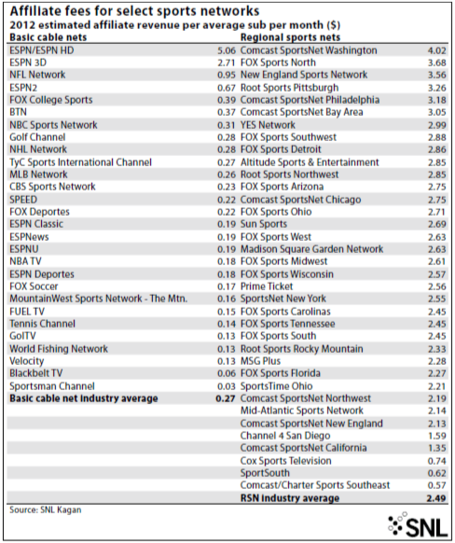 There is a bit of a twist involving the broadcasters who also happen to be cable providers, which is of particular importance when discussing the Philadelphia market. Comcast, the cable provider, being a Philadelphia-based company, and through some deft, if shady, business maneuvers, has a market share in excess of 60% in the greater Philadelphia area. Thus, if a non-Comcast broadcaster were to win the rights to broadcast Phillies games that broadcaster will have to negotiate with the regional cable providers, Comcast being the major player, to have them carry the Phillies games into local homes. Strategically, this potentially affords Comcast a negotiating advantage because of their relative strangle-hold on the target consumers. If, for example, Fox Sports wants to get in on the bidding (and it's rumored they do), they know that without Comcast's cable customers they'll have access to less than 40% of their target audience. Comcast knows this as well, and can hold Fox over a barrel when it comes to negotiating the carriage fees that Comcast would have to pay Fox for those Phillies games. Without access to a majority of the target audience the RSN faces trouble, as I'll get into in part II of this piece.

Finally, you may have occasionally heard about teams establishing their own, team-owned networks, such as the Yankees YES network or the Red Sox majority ownership of NESN. It's safe to say this is an extremely unlikely scenario for the Phillies for a few reasons. Startup costs for such a network are expensive, said to be upwards of $100,000,000. And for the Phillies specifically they don't seem much interested in operating their own network; they actually abandoned a minority ownership stake in CSNPhilly back in the early 2000s, as they felt they weren't well suited to being in the television business. Dave Buck, Senior Vice President of Marketing and Advertising:

The second reason such a network is unlikely is because the nature of these deals has changed over the last five years or so. Teams are increasingly getting a substantial equity stake in the regional sports network that broadcasts their games, allowing the team access to that revenue stream and all the associated branding opportunities that are the main benefits of owning your own channel, while using the experience and infrastructure of the broadcaster to handle the operational and programming side of the channel. In fact, most of the teams that owned their own networks have actually sold off significant portions of those channels to other investors and national broadcasters. YES Network, for example, recently sold 49% ownership in the network to News Corporation, the parent company of Fox. Additionally, those equity stakes allow teams to circumvent some small portion of the revenue-sharing aspects of the collective bargaining agreement, which would otherwise require 34% of revenues to be turned over to the league. It's likely that any Phillies deal will include an equity position in the winning bidder's network, but highly improbable they go the independent route.

What you have here is the recipe for gigantic contracts to sports teams and leagues, paid for by every single cable customer in the country, whether or not they enjoy sports. This situation is unfortunate for them, but it's not so bad if you're a fan of one of the teams getting in on this party. When taking all of the above into account you might be tempted to think that it's all blue skies and green lights, just sit back and wait for the cash to roll in. Well, maybe. As I'll get into in the second half of this story, most of what I just mentioned is prologue which may not necessarily hold true over the coming years.