Martinez is on track to accomplish something that no Phillie, and very few in the history of baseball, have ever done. And as one might guess, it's not a good thing.

Share All sharing options for: Michael Martinez: A Stat Oddity

Michael Martinez now has 34 PAs this year, and a line of .176/.176/.176.  That's because he has nothing but singles to show for his efforts -- no extra base hits to boost slugging, no walks or HBPs to increase OBP, and no sacrifice flies to reduce it.

Across all of MLB, there have been only 22 seasons by non-pitchers since 1901 with at least 34 PAs and the same BA, OBP, and SLG. The record is 79 PAs, by one Aleck Smith in 1901. Recent examples include:

Other notable names with fewer PAs:

There have only been 9 such seasons since 1901 with 40 or more PAs, so there is something for MiniMart to shoot for.

What is actually kind of amazing is that the Sacrifice Fly wasn't tracked consistently until the 1950s, which means that some of the seasons of the early 20th century that are recorded as not having any SFs may in fact have had some, which would make what Martinez is doing an even more rare feat.

Martinez also doesn't have any sacrifice hits, and there have only been 8 seasons in MLB history with 34+ PAs and no XBH, BB, HBP, SF, or SH.  The record for most PAs in such a season is 41 by Joe DeMaestri with the 1961 Yankees.

So the Mini Watch is on.  If we have to endure watching him trying hit a baseball, at least we can track his progress to immortality by avoiding extra base hits and walks. The hardest part might be avoiding HBPs and Sac Flies, since doing so also depends on other players and cannot be accomplished by MiniMart's ineptitude alone. 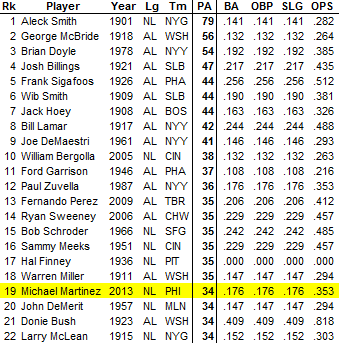