What the Phils need to do to secure a protected 1st round pick in 2014, where does their current lack of walking (or the bullpen's walking too many) fit in recent history, and who's hot, who's cold?

The Phillies are currently tied for the 9th worst record in baseball, meaning that if they sign a free agent whose former team offered them a Qualifying Offer, their first round pick would be protected, and they would lose their second round pick instead: 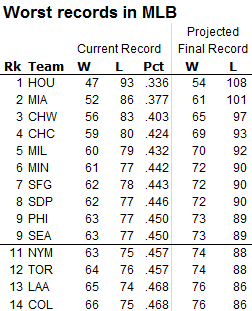 90 losses will almost certainly mean a worst-10 finish, and the Phils need to go no better than 9-13 in order to lose that many.

89 losses may also be enough, in which case if they can go 10-12 and still get the protected pick.

Walk to the Bottom

The Phillies have a schizophrenic relationship with the base on balls this year.  Their hitters have avoided it, their starters have also been good at avoiding it, but the bullpen of young arms with good-to-great stuff but lousy command, loves handing out free passes.  But where does that put this team in the context of recent NL history, or in the history of the Phillies? 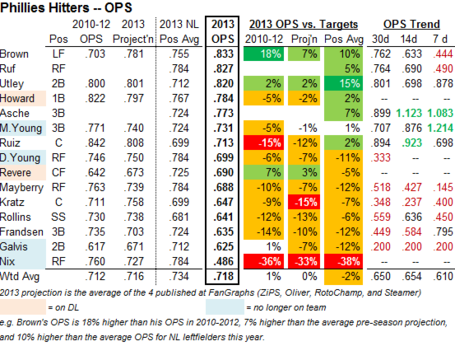 The other hot hitter noted above is Carlos Ruiz, who has had two starkly different parts to his season to date:

The most surprising and worrisome part of the Chooch's start was the utter lack of power -- only 4 doubles to go with 34 singles, for an ISO that not even a poor hitting pitcher (or Michael Martinez) would be proud of (.027).

Back in early June, I chided Tom McCarthy for saying that Frandsen wasn't hitting like last year, when in fact, his overall stats were actually very comparable to last year's at that point (.356 wOBA, vs..362 last year).  He continued hitting well, and finished the first half at a .371 wOBA and .835 OPS (vs. last year's .834) -- he even had a .297 batting average that McCarthy would like.  And, unlike last year when he needed a .366 BABIP to generate that production, this year it was only at .314 at the All Star break.

Well, since then, he hasn't been able to hit a thing:

His batted ball splits show only 15.9% line drives in the first half, and getting even worse at 13.8% in the 2nd half.  So maybe that .314 BABIP should have been lower, and actually include a good bit of luck that has now deserted him.

Last year he hit line drives in an impressive 24.3% of the balls he put in play.

However he's also hitting even worse, if that were possible, than before:

David S. Cohen did some research off-line on Rollins' past streaks like this, and I'm going to take the liberty of pasting his work here:

And as David noted, it will be interesting to see whether the recent spate of walking is a trend, or a blip.

Chase Utley
- On Sunday Utley passed Juan Samuel to move into 9th place in strikeouts in Phils history, and he now has 828.
- Also, with Ryan Howard out of commission, Utley passed him to move into 7th place in Phillies extra base hits.
- Utley's next HBP (6th this  year) will tie him with Fernando Vina for 18th all-time, with 157.
- He needs 2 more home runs (18 total) to tie Cy Williams for 7th on the Phillies all-time list, at 217.
- His next Sac Fly (5th) will tie Garry Maddox for 4th in Phils' history, at 51.