In a lost season, you take what you can get--though a home sweep of the loathsome Braves, powered by the ace and the kids, is pretty good stuff at any time.

A few years back, in what was almost certainly their sole positive contribution to American culture, the Braves announce crew referred to then-phenom Cole Hamels as "Darth Vader in Spikes." Hamels continued his second-half surge Sunday, force-choking the Braves over eight dominant innings to register his 14th career win against them, tied for his most against any opponent, as the Phillies wrapped up a three-game sweep of the NL East front-runners. Only Evan Gattis had an answer for Cole's mastery, crushing two majestic solo homers in the second and seventh innings and barely missing a third on a deep flyout in the fifth. Absent his 2 for 3, the rest of the Braves hitters went 0 for 24 with two walks and 10 strikeouts against Hamels and B.J. Rosenberg, who pitched a 1-2-3 9th to earn his first career save.

Offensively, things started and ended well, with two runs in the first, one in the eighth, and six innings of the accustomed futility in between. Cesar Hernandez had about the most frustrating game possible for a guy who reached base three times, getting picked off in the first after reaching on a hit-by-pitch and thrown out trying to go from first to third on a Jimmy Rollins single in the fifth. Chase Utley followed both at-bats with hits, meaning that Cesar's on-base mishaps arguably took two runs off the board. Utley's first knock, a double, drove in Rollins, who'd walked and stolen second, and Chase came around on Darin Ruf's single.

Braves starter Paul Maholm danced through the raindrops for the rest of his six innings, as the Phillies stranded seven runners on the day. Meanwhile, Hamels carved through everyone but Gattis, finishing with nine strikeouts on the afternoon and working around leadoff walks in the sixth and eighth. Over his last nine starts, Hamels has allowed 15 runs in 67 innings, going at least seven innings in each of while pitching to a 2.01 ERA during that stretch.

Ruf got him the win with a great at-bat in the bottom of the eighth. Falling behind 0-2 to Braves reliever David Carpenter, Ruf looked at three straight balls to work the count full, then blasted a pitch into the right-field stands for his 13th home run of the season. Whether or not to give Ruf an everyday job will be one of the most interesting questions facing the Phillies this winter; what's certain is that his approach at the plate is uniquely effective on a team mostly comprised of indiscriminate hackers.

Rosenberg got the call in place of Jonathan Papelbon, who got the day off after saving Friday's win and "earning" the victory Saturday when Freddy Galvis bailed him out following an Andrelton Simmons two-out, two-strike, two-run homer that erased a 5-3 lead. Facing the top of the Braves lineup, Rosenberg needed just nine pitches to retire B.J. Upton, Simmons and Freddie Freeman, who struck out to end it.

The Phillies entered the weekend with a "tragic number" for the NL East division of 1. It means nothing in the larger sense, but it feels good to see that number stay right there after three one-run wins over the despised Braves.

Fangraph of moral and actual victory: 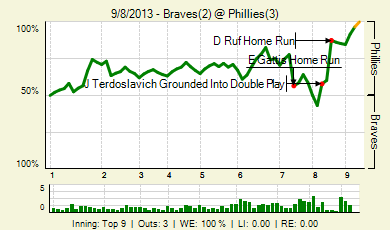