The number of players who have gone on to be inducted hasn't been consistent across baseball's history. Some eras are grossly over-represented at the expense of others.

Share All sharing options for: Hall of Fame Induction Chances through History

While last week's announcement of the Hall of Fame vote and the stories around it are still somewhat fresh in our minds (for better or worse), let's take a look at just how "exclusive" the Hall really is, and how that has changed during baseball's history.

First, theoretically should the number of players admitted grow over time, decline, or stay the same?

There are arguments for allowing fewer now than in the past:

On the other hand there are also arguments that talent levels have expanded:

Or should none of that really matter -- compare players to their peers, and the percentage of all players inducted should be about constant, even as the level of talent ebbs and flows.

However one thinks about that, here we look at how likely players have been to eventually be elected throughout baseball's history. For example, just to pick one year, 47 of the inductees played in 1920. There were 16 teams at the time, and while rosters have fluctuated up and down, as shown here, they seem to have hovered around 25 since the 1910s. This gives a total of 400 roster spots. So at any given time in 1920, 47 out of 400, or 11.8% of the players on MLB rosters, were future Hall of Famers. If you do this for every year in the 1920s and then average the percentages, you get the 15.9% that is shown in the table below. On average in the 1920s and '30s, almost 1 in 6 players on a roster at any given point have been voted into the Hall by now. By the late 1950s, this had been cut in half, to only about 8.5%, or 1 out of 12 players. It fell under 8% with the 1961 expansion, and has stayed under that mark for all years since.

Another way to look at it is to calculate the average number of inductees per team, which should not be impacted by the number of spare bench players or relievers on the roster. This method shows the same spike in the 1920s and 1930s: at any given time over those two decades, if you looked around a team's clubhouse, on average 4.0 players per team would go on to be inducted. This number had fallen considerably by the 1950s and 1960s, when only about 2 per team were future inductees. The 1970s are even lower, but that number will continue to inch higher as the Veterans Committee considers players.

The higher numbers in the '20s and '30s are undboubtedly due to the higher run environment in those decades, which made hitters in those eras look better than those of other eras. This was less of an issue for pitchers, since Wins, as much as ERA and other stats, has continued to be a major criterion for voters until even today. 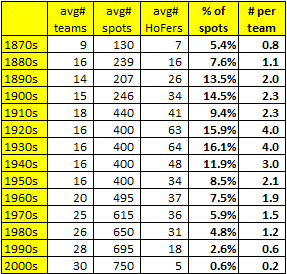 And in graph form:

Number of future Hall of Famers active in each year... 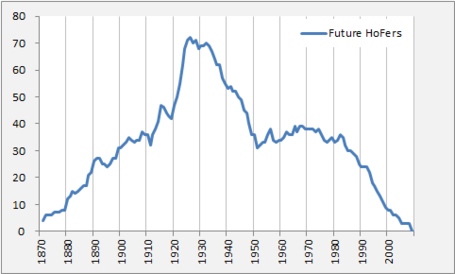 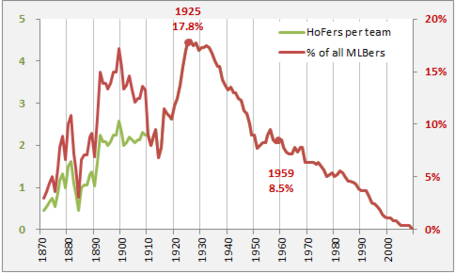 So what percentage of players get into the Hall of Fame?

According to Baseball-Reference, there have been 18,174 players in major league history, and 219 have been inducted into the Hall (excluding Negro Leaguers), or 1.2%, although it appears that that percentage was much higher in the first half of the last century, and therefore much lower in recent decades.

Number of future Hall of Famers active in each year, and the method by which they were inducted: 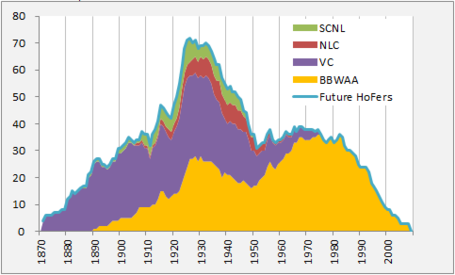 What this shows is that in 1930, for example, 69 future Hall of Famers were active that year. Of those 69, only 28 were voted in through the BBWAA ballot. Another 11 were Negro Leaguers inducted in the 1970s and in 2006. The other 30 were major leagues who were voted in through the Veterans Committee, who apparently looked at their stats and exclaimed, "Whoa -- how did this guy get overlooked when he was on the ballot?"

The peak in futures Hall inductees is from 1923 through 1937, with at least 60 active in each year. There are 100 players active through that period, and of those 100, only 35 were voted in by the BBWAA during their time on the ballot.

The other 65 were inducted later, most of them (46) by the veterans committee, and the other 19 by committees considering Negro League players.

And the above graph in terms of % of major league roster spots: 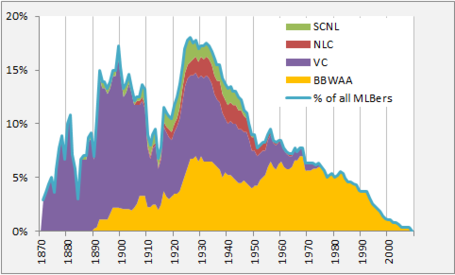