The Phillies, Vernon Wells, And Being "Really Useful"

Reports are the Phillies are showing interest in Vernon Wells because obviously whenever you can get a negative-WAR player on your roster you absolutely have to do it.

Share All sharing options for: The Phillies, Vernon Wells, And Being "Really Useful"

My three-year old son loves Thomas the Tank Engine. Loves it, loves it, loves it. He has about 40 trains, knows all their names, the numbers on the sides of their tenders, and can recite dialogue from entire episodes if you catch him in a particularly chatty mood.

The man who runs the trains on the mythical island of Sodor is a man known to us here in the United States as Sir Topham Hatt. In England, he's called "The Fat Conductor." Whatever you want to call him, there is one thing Sir Hatt wants his trains to be, more than anything else. And it's the value that all the engines on Sodor want to possess more than anything else. 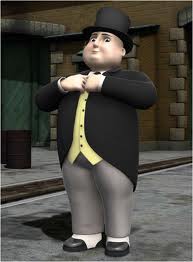 With rumors spreading that the Phillies are interested in former Yankee OF Vernon Wells, according to the Boston Globe's Nick Caffardo, I suddenly wish that Sir Topham Hatt was the general manager of the Phils.

For whatever reason, Amaro sees players like Wells, and Delmon and Michael Young before him, as "really useful engines," when in fact, they are "really useless ballplayers."

The Youngs stunk. And Vernon Wells stinks. And here we are... once again... apparently willing to wade our feet into a pool of uselessness.

This has been a really fun off-season.

Wells used to play good defense and used to run the bases well. But, that isn't the case anymore. And while the 35-year-old outfielder is decent against left-handed pitching, could be a platoon bat, and his status as an elder statesman certainly fits Ruben Amaro perfectly, the Phils already have limited right-handed "power" bats in Darin Ruf and John Mayberry Jr.

It's hard to see how Vernon Wells could be of any use to the Phils. Of course, he would require almost no financial commitment, as his $21 million salary will be covered by New York. Bringing him to spring training is a no-risk proposition.

And hey, if it means cutting ties with John Mayberry, well then, maybe Wells would prove to be a little bit "useful" after all.

That said, it wouldn't be the first time Ruben brought a less-than-useful engine aboard the Phillies. And it probably won't be the last.