ESPN's Jayson Stark revealed Mike Schmidt, the greatest third baseman who ever stepped on a baseball field, will not be an instructor at spring training this year, due to a medical issue.

Share All sharing options for: Get Well Soon, Mike Schmidt!

One of the most shocking things I have ever seen was when Mike Schmidt arrived at Clearwater last year as part of his yearly stint as a guest hitting instructor at Phillies spring training. 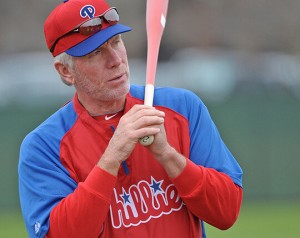 Mike Schmidt, without the mustache he's worn since he was, what, six years old? It took me DAYS to get over. Well, maybe not, but it was still kinda jarring. And despite being surprised and, dare I say it, a little scared, it was excited to see him back where he should be, working with the Phillies.

So it was with a little bit of sadness when I read Jayson Stark's news that Michael Jack would not be in uniform as a spring training instructor this year.

The team said in an announcement Wednesday that Schmidt, who lives in Jupiter, Fla., "is treating a health issue that requires him to be near his doctors and will be unable to attend spring training as a field instructor this year."

Schmidt still "plans to visit camp in the middle of March" as part of his marketing relationship with the Phillies, the announcement said. And he expects to "continue his normal visits to Philly this summer."

Of course, it would be wrong to speculate that anything is really wrong with Mike. He could have the flu. He could have rickets. It's really anyone's guess, although it's probably not rickets.

It's good to see that Schmidt will make a trip down to Clearwater, though, even if it's just for a couple days. I'm more interested to see if he's let the 'stache come back.

So, without knowing any more details, this is simply a post wishing Mike to get well soon. That, and an excuse to post a bunch of cool video highlights for you to watch. Because, you know, I like page views and stuff.