Some particulars and musings on the Phils-Comcast TV Deal

It's been a few days since the Phillies TV deal news broke, and a clearer picture of the agreement has taken shape. According to all reports, the Phillies' new television deal is worth $2.5 billion over 25 years. The annual disbursements have an escalator said to be somewhere between 3% and 4% annually. The Phillies also retain some revenue from the advertising sold during Phillies broadcasts, a continuation of the terms of their current contract (this presumably extends to editorial control as well, a feature first negotiated years ago to keep in-stadium advertising and on-air advertising consistent). This is a relatively unusual contractual stipulation, as none of the other recent deals I've studied have given the team such control. The Phils will also receive an equity stake in ComcastSportsnet Philadelphia, said to be 25%. This new deal is set to begin after the 2015 season, with the exception of the broadcasting plan, which will change for 2014. As mentioned in the last update, the Phillies will no longer air games on PHL17. Something like 10-15 games will be shifted to Comcast's sister station NBC10, while the vast majority will now be solely available on CSNPhilly.

Any $2.5 billion contract is undoubtedly huge, but in comparison to some of the more recent deals across baseball this one isn't particularly groundbreaking. Breaking out the table of recent deals once again, and filling in the Phillies row with the new contract info we can see this a little better:

As is clear, the Phillies haven't set the standard in any of those categories. The ownership stake in the RSN isn't particularly large, and the annual rights fee is in the bottom half of these recent/comparable deals despite the Phillies occupying the largest single-team media market in the sport. Further, the terms are on the long end of the scale here, at 25 years. The Angels, for example, get more annual money, the same percentage of their RSN, and got those terms on a 20 year deal. Breaking down that annual rights fee doesn't provide much cause for jubilation either. Running the numbers on the deal, assuming total disbursements of $2,500 million with a 3.5% annual increase, you get a breakdown of Comcast's annual payments to the Phillies that looks like this (y axis in millions): 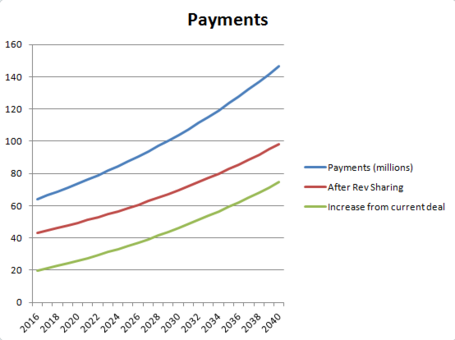 The blue line represents the actual annual payments to the Phillies. They start around $64 million in 2016, first eclipse the $100 million mark around 2029 and end at a maximum of $146.5 million in 2040. The red line represents the payments the Phillies will actually receive after the 34% revenue sharing tax has been assessed. The green line is the difference between the current deal, generally assumed to be about $35 million a year prior to the revenue sharing tax, and the post-revenue sharing disbursement shown in red. The increase is substantial-nearly doubling from 2015 to 2016-but is far from the $150 million per annum the Rangers and Angels negotiated, and worlds away from the Dodgers' deal.

That said, these are not apples-to-apples comparisons. CSNPhilly is one of the more highly rated RSNs in all of sports, carrying the Flyers and 76ers and reaching many more homes than, say, CSN Houston, for example. Owning 25% of CSN Philly confers financial advantages that are not equal to a 25% equity stake in some of those other regional sports networks, though it certainly lags the elite-revenue teams in the sport:

If $2.5B/25 years plus small equity are terms of Phillies' new deal, puts them below Angels/Dodgers/Yankees/Mets/Red Sox for TV $$.

@JA_Todd Yankees' stake in YES, BOS stake in NESN, and Mets stake in SNY worth far more than Philly deal.

All the deals Wendy Thurm is talking about there were signed years ago, well before the Dodgers set the bar astronomically high with their $320-340 annual rights fees.

Why might the Phillies deal not be quite on the level of those elite revenue teams? Well, perhaps it is in part due to a slowly deflating sports television bubble. Maury Brown, who covers the financial side of sports for Forbes Magazine weighed in:

Somewhat now. Lg mkts will still get. Smaller, not as much RT @BookerTdub at what point does the tv rights deal money burst?

It's probably some combination of that and the Phillies risk-averse natureTM (h/t Bud from TN). David Montgomery hinted at this in his interviews on the subject, which I pointed out in the last update:

The Phillies were never a threat to pursue another carrier or create a bidding war.

"It's an opportunity," Montgomery said in September. "The only thing I will caution is, compared to others, we've had a nice deal. You see some situations where clubs have had a substandard deal. We've enjoyed a very solid relationship with Comcast ever since we were a part of forming Comcast SportsNet in 1996."

"One of the strengths is we're blessed with the passion of a great sports marketplace," Montgomery said. "And [Comcast SportsNet] is an RSN [regional sports network] that hosts all of the teams. People go to CSN locally for their sports. So the strength overall in the market was certainly a factor as to whether to enter a new deal with them or look elsewhere . . . We just feel it's right for us."

The first of those quotes spawned this tweet very shortly after the deal was announced:

The last full paragraph in this Gelb article makes me feel like the Phils weren't putting the screws to Comcast: http://t.co/4sSrMrLztA

Taking all of this into account, I'd describe this deal as one which is comme ci comme ça. Neither particularly good nor bad. Phillies did well for themselves and will not be hurting for cash when it comes to signing or retaining players if they so desire, but this is not the stratospheric Dodgersesque deal that some (myself included) thought it could be. The Phillies can't go full Yankees/Dodgers, as I had hoped earlier this off-season; they just don't have that kind of money.

I don't want to be too negative about a deal that nearly doubles their TV contract money in its first year and provides the team a couple of billion dollars over the next couple decades. While the wide lens perspective is only so-so, the Phillies prospects in the NL, and the NL East in particular, are certainly enhanced by this deal. Take a look at the teams with whom the Phils are competing. The only senior circuit team that has a television contract with a higher AAV than the Phils is the Dodgers. That's it. At the divisional level, the Phillies are sitting pretty well for the time being. The Nationals are embroiled in a dispute over their market rights with the Orioles. Estimates put their portion of the MESN take at ~$30 million. The Marlins are a national disgrace to the sport and have a horrible television contract that pays them less than $20 million a season. The Mets own a substantial portion of SNY, but have borrowed heavily against that position, to the point where they're still unable to increase payroll some 3 6 years post-Madoff:

Annually, the Mets have been servicing their debt to the tune of roughly $90 million, between the loan against the team coming due, the loan against S.N.Y., now greater than $600 million, due in 2015, and the twice-annual debt balloon payments on Citi Field.

That the other $70 million went toward paying down that loan, from $320 million to $250 million, means the last of the money is almost certainly gone.

HOLY CRAP LOAN emphasis mine. And then there are the Barves. They're a well run organization stuck in perhaps the worst television contract in the sport, considering their success and the lack of benefit they reap from it. SB Nation's Grant Brisbee described the situation in Atlanta as the "Raysification of the Braves," which probably isn't far from the truth. In essence, the Phillies are going to be the richest team in their division for the foreseeable future, and it's not particularly close. And that means something when divisional titles confer guaranteed playoff spots.

This coming season looks to be a departure from Phillies standard operating procedure, in which they typically increase or decrease their payroll in accordance with their anticipated future revenues. Whether this is a one-year aberration or a new trend remains to be seen, but when you have David Montgomery saying things like this:

Since we've moved [to Citizens Bank Park], we have been able to be a club that is substantial in its payroll. I assume we will continue to be in the top four or five in the game.

...it's not inconsequential. Maintaining one of the top 4-5 payrolls in the game certainly allows a team to make more player-personnel mistakes than teams without that luxury, it allows for the overpayment to fill positions of need, it allows for the retention of homegrown talent, and it allows for the team to be players on the free agent and international markets, if they feel so inclined.

Additionally, while the Phillies appear to be a team reticent of exceeding the luxury tax, we must also consider that that luxury tax will not remain at $189 million for the foreseeable future. As payrolls across the game increase and the luxury tax threshold follows suit, maintaining a top-but-under-the-luxury-tax-threshold payroll is going to require significantly more money than it does today. This deal ensures that the Phillies will remain competitive in those situations for years to come.

The deal isn't ideal, and it now appears the Phillies will never be the "Yankees of the NL," but the contract the Phillies announced will keep them in the upper echelon of baseball payrolls for the foreseeable future, which should give them enough of an advantage to remain competitive even if they make more personnel mistakes than the elite, analytical teams tend to. It's by no means a great deal, but it's probably good enough, and if they ever fully embrace efficiency and analytics, with that kind of financial backing they'll easily be among the best clubs in the sport.

Further reading on the subject (If you ever want to follow a breaking story, I suggest you find a good search string and open up a twitter search for that topic. Information just flows to you over time; it's quite the useful tool):

What You Pay for Sports