(Regional Sports) Network: We're in a lot of trouble!! [A hyper-link'd jawn]

You've gotta say: "I'm a Phillies fan, goddammit! And my life has value!"

Share All sharing options for: (Regional Sports) Network: We're in a lot of trouble!! [A hyper-link'd jawn]

Network - We're In A Lot Of Trouble! (via The Ghost)

So, a rich little man with thinning hair signed a contract. What does that got to do with the price of rice, right? And why is that woe to us?

Because you people and 6 million other Phillies fans are listening to me right now.

Because less than 3 percent of you people read books.

Because less than 15 percent of you read newspapers.

Because the only truth you know is what you get over this tube.

Right now, there is a whole, an entire generation that never knew anything that didn't come out of this tube.

This tube is the gospel, the ultimate revelation.

This tube can make or break presidents, popes, prime ministers.

This tube is the most awesome goddamn force in the whole godless world.

And woe is us if it ever falls into the hands of the wrong people.

And that's why woe is us that Brian Roberts signed a contract.

Because this team is now in the hands of the Comcast Corporation. And Ralph Roberts is the father of Brian Roberts, the Chief Executive Officer. And when the 56th largest company in the world controls the most awesome goddamn propaganda force in the whole godless world, who knows what shit will be peddled for truth on this network.

Television is not the truth. Television's a goddamn amusement park. Television is a circus, a carnival, a traveling troupe of acrobats, storytellers, dancers, singers, jugglers, sideshow freaks, lion tamers, and football players.

We're in the boredom-killing business.

So if you want the Truth, go to God.

Go to your gurus.

Because that's the only place you're ever gonna find any real truth.

But, man, you're never gonna get any truth from us. We'll tell you anything you wanna hear. We lie like hell. We'll tell you that Kojak always gets the killer and that nobody ever gets cancer at Archie Bunker's house. And no matter how much trouble the hero is in, don't worry. Just look at your watch. At the end of the post, he's gonna win. We'll tell you any shit you want to hear.

We deal in illusions, man. None of it is true!

But you people sit there, day after day, night after night -- all ages, colors, creeds.

We're all you know!

You're beginning to believe the illusions we're spinning here!

You're beginning to think that the tube is reality and that your own lives are unreal. 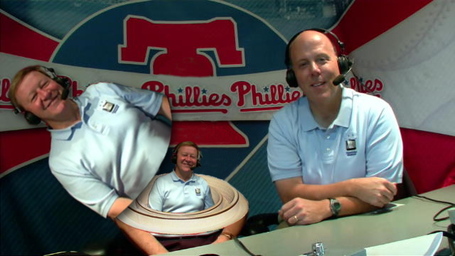 You do whatever the tube tells you -- 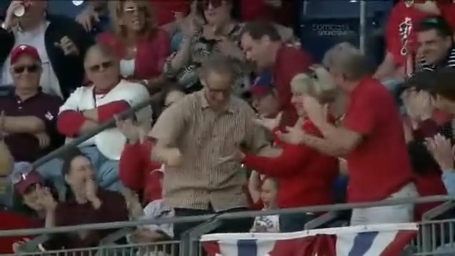 This is mass madness, you maniacs!

In God's name, you people are the real thing.

We are the illusion! 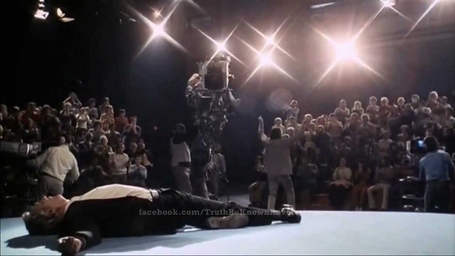