The Phillies attendance drops in the past two years put them in some sorry company.

But just how bad the Phillies are doing in this latter measure is somewhat shocking.  Here's the basic information about the Phillies' attendance over the past two years:

So massive in fact, that no other team in baseball lost that much in per game attendance over the past two years.  The bottom dwellers in this metric:

What's most distressing about the Phillies' drop here is that they have more wins than three of these other teams over this two year period -- 146 compared to 136 each for Chicago and Minnesota and 139 for Miami (158 for Texas).  In other words, despite winning more than three of these other franchises also suffering from declining attendance, the Phillies lost a lot more fans in the seats. 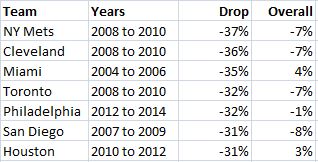 So that leaves six different teams that have had two year drops of over 30% - the Indians, Marlins, Blue Jays, Phillies, Padres, and Astros.  In and of itself, this is a bad list that the Phillies would prefer to have no part of.

Parsing this list a little further though makes it even worse.  Three of the remaining six drops occurred during years that baseball overall had attendance issues.  The last column shows the relative attendance change for the two years for all of baseball.  The Indians, Blue Jays, and Padres suffered their attendance drops when all of baseball was suffering.  (The suffering was partly because of those franchises, but not entirely - without the three in 2008 to 2010, baseball lost 4% total; without the one franchise in 2007 to 2009, baseball lost 7%.)

That puts the Phillies in truly woeful company - the 2011 and 2012 Astros and the 2005 and 2006 Marlins.  The Astros in those years won just 111 games total.  The Marlins in those years were better, winning 161 games, but they were the Marlins . . . a baseball team with a horrible owner playing in a terrible stadium in a community that has never embraced them.

This is the company the 2013 and 2014 Phillies are keeping with their 32% drop in attendance over the past two years.  It's terrible.

However, with promises already to keep Ruben Amaro Jr. at the helm of this ship and to bring back all big league coaches, it's hard to be optimistic about the Phillies getting this message.  In fact, barring a shocking turnaround on the field next year, it's easy to see disillusioned fans fleeing CBP even more, with another double digit drop in attendance.

Maybe then ownership will get the message?