The Good Phight predicts the playoffs

TGP staff members make their playoff picks, because some of us are desperately clinging to baseball. Don't go, baseball!

Share All sharing options for: The Good Phight predicts the playoffs

Now that the two wild card games have been played, we can focus on the meat of the playoffs and make our picks. Here are your TGP staff members' picks for the playoffs, and a brief explanation as to why they still care.

Washington Nationals: Because it would just be the ultimate trolling of a truly abysmal and forgettable Phillies season.

ALDS: Angels over the feel-good Royals team in 5. Watch this series not only because it features the best player in baseball and a Royals team that hasn't seen the playoffs since the Reagan administration, but because it features some former Phils in Erik "Turkeybacon" Kratz and Raul Ibanez. The Royals also employ Jayson Nix, who was a Phillie as recently as this past May, but he was terrible everywhere he went and isn't on the playoff roster, so let's just all forget about him.

Baltimore over Detroit in 5. Rooting for the underdog team that hasn't won recently over the team that seems to be in contention every year is pretty easy for me, so there you have it. Though I don't actually think Baltimore is the better team, this is a 5 game series so that really doesn't matter all that much.

ALCS: Angels over Baltimore in some games. In a 7-game series the better team is ever so slightly more likely to win, and rooting for the Millville Meteor isn't too difficult.

NLDS: San Francisco over Washington in 5. Game 5 will be a great pitcher's duel that is interrupted in the 8th inning as Mike Rizzo personally comes down from the GM box to remove Strasburg from the game, allowing the Giants to score off of a shaky Rafael Soriano. When questioned after the game about the unusual move, Rizzo will tell reporters that they wanted to conserve Strasburg's arm for their playoff run next season. The Nats will have a chance to tie it in the 9th, but with a couple men on and 1 out Bryce Harper is removed by Matt Williams for failing to chew his BubbleYum with the proper intensity. Replacing him, Kevin Frandsen will then ground into a series ending double play. In the dugout after the series Matt Williams will be seen whittling a baseball bat with his teeth into the shape of an extended middle finger.

The other NLDS series:

The All Southern California World Series (Selig fixes some things to make sure it goes the full 7 games, so as to extend his tenure for as long as possible):

The California Angels are your 2014 Champions of baseball!

ALDS: Tigers over Orioles; Angels over Royals (note: I'm taking the over on 0.5 bunt inside the parkers in this series)

ALDS: Orioles over Tigers because I believe in magic. Magic prevents Miggy and V-Mart from hitting OPSing a combined 1.200. And Angels over Royals because it's always spawning season.

NLDS: Nationals over Giants because Werth was a better Phillies RF than Pence. And Dodgers over Cardinals because REVENGE!

ALCS: Orioles over Angels because by then the Angels will be calling on mostly fans and zombie Chuck Finley to pitch for them.

NLCS: Nationals over Dodgers in 7 games and 100 innings because in the postseason good pitching beats good hitting.

WS: Orioles over Nationals because a parade in DC would really screw up my commute.

ALDS: Tigers over Orioles. I love the Orioles, but the Tigers have the pitching, and at some point that's gotta win out. Or it could be the Orioles over the Tigers. Really, in this part of the playoffs, I don't care. I enjoy both teams. Can they both win? Or is that not how it works? And Royals over Angels. The Angels already have a bunch of dudes pitching who no one knows, so it's just a matter of time before it all falls apart on them. Jered Weaver? Who even is that? And even though we get to see Mike Trout in the postseason, the Royals have a more compelling story. And since at this point I'm not obligated to care about any of this, I can decide why I want a team to win or lose. They're all puppets in my little play!

NLDS: Over on the National League side, I care quite a bit. Under no circumstances should the Giants or Cardinals be allowed to advance any farther. Everyone everywhere has had enough of those teams. GO AWAY. GIVE SOMEONE ELSE A CHANCE. So Dodgers over Cardinals, and Nationals over Giants. Do it, boys. We're counting on you.

ALCS: Royals over Orioles. I think. Again, the excitement of the Royals fans has infected my brain. Did you see them Tuesday night? Holy shit, they were so excited. I want to see them all lose their damn minds over and over in the playoffs, because a team that's been out of it for so long deserves something good. And if it can't be the Pirates, than it might as well be the Royals.

NLCS: This is the toughest choice, since I think the Dodgers and Nationals are evenly matched. I mean, their rotations are both insane, but in the end I think the Nationals might take it. Call it a hunch.

ALDS: Los Angeles over Kansas City - The Royals are doing it with smoke, mirrors, and a manager that seems hell bent on sabotaging any success the team may get. The Angels' lineup is completely stacked, with every member of the lineup posting a wRC+ better than league average. And while their rotation is suspect and their bullpen threw more innings than any other team in the AL last year, I still think their firepower is enough to overcome a Royals rotation that will only be able to throw James Shields once in this series.

ALDS: Detroit over Baltimore - Of all the playoff series out there, this is the one I have the least feel for. Because I live in DC, I'd love to see an O's-Nats World Series, if only to shut up Redskins fans around here for a little while. The Detroit rotation better be good because their bullpen is terrible, and the Orioles know how to score. However, Baltimore's rotation doesn't have a true ace, and will try to win by bludgeoning Detroit's arms to death. In a short series, I'll go with the team with the superior rotation.

NLDS: Los Angeles over St. Louis - None of us can stand either team, but unfortunately, one of them is going to have to win. Clayton Kershaw and Zack Greinke are a terrific 1-2, although Adam Wainright and Lance Lynn aren't too shabby either. The real edge here may be the Game 3 starters, Shelby Miller vs. Hyun-Jin Ryu, with Ryu coming off a shoulder issue. That could be the key swing game to the series.

NLDS: Washington over San Francisco - I hate the Giants. Cody Ross, Juan Uribe, Brian Wilson, Jonathan Sanchez, they're all dead to me. Although, I guess there are players to like, namely Hunter Pence, Buster Posey and Pablo Sandoval. Still, I want them to go down hard here. Luckily for me, they're playing perhaps the most complete team in baseball right now, the red-hot Nats, who feature a rotation that has been almost unhittable over the last month. The only problem for the Nationals is the closer situation, with Drew Storen looking to erase his demons from 2012.

ALCS: Detroit over Los Angeles - I just don't think that L.A. rotation can hold up to a pretty good Tigers lineup, and sooner or later, all those innings the Angels' bullpen has thrown is going to catch up for them. Of course, Detroit's bullpen is a tire fire too, so they'll be relying on their starters to eat a lot of innings, something that could be tough against a good-hitting Angels lineup. It'll be a close series, and could be a high-scoring one.

NLCS: Washington over Los Angeles - The Dodgers are the one team with a "win-now" mandate, and if they don't at least advance to the World Series, you could see big changes in Los Angeles. This is simply faith that the Nats' rotation is simply too good to lose right now.

Angels and Kansas City? My heart wants the Royals, but my head says the Angels. Maybe someone should give Billy Butler enough cocaine that he turns into a version of 1980's Willie Aikens, and he can club the Angels to death. 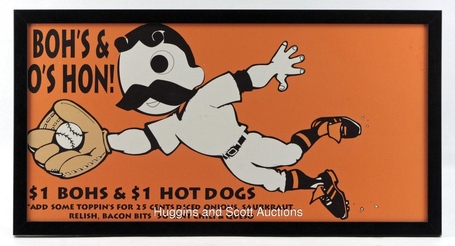 If I have an AL team, it is the O's by family and proximity and Earl Weaver touched me in a very special place when I was young - my heart. Three. Run. Bombs.  I want Nelson Cruz to earn a ridiculous and regrettable contract from someone like the Yankees following a monster postseason. Then he can go all Ken Phelps on them.

Also, I will be in Fells Point this weekend for the Fells Point Festival. It is getting too corporate, but there is still some sleazy grit and fun to be had. I get the most amazing pictures from Bond Street where the guy with the Rastaman brain bucket sells the stylized wood carvings with the monster wangs.  I'll tweet some this weekend.

Los Angeles vs. St. Louis: Um, LA. Ugh. Would only that a meteor would strike the stadium as these two teams play.  I will "cheer" for LA over STL, if only because I want to see Puig to show America all of his bat flips so that sourpuss traditionalists everywhere have strokes. Also John Middleton the Younger looks so awesome wearing his Dodgers hat. Check his twitter pics. I'm sure he will be wearing the LA hat this postseason. He sure isn't going to be wearing a Phillies hat.

San Francisco v. Washington: Seriously, I hate all other National League teams except the Pirates. Die. I don't care who wins, just as long as it is an awful war of attrition where they play 20 innings *EVERY SINGLE GAME*.  Winner: Entropy.

World Series: Baltimore, of course, in a rematch of the 1966 World Series when Frank Robinson and the O's showed the Dodgers what was up by kicking those heavily-favored California panty-waists' dicks right in the dirt in a four game sweep. I might even be able to score some tickets.