Phillies' scoring increased slightly over the prior year, which is saying something in a season where offense across MLB was the lowest since 1981. Also, 34 years ago today the Phillies won their first World Series.

** As we wrap up the year, and while it's still fresh in our minds, please take a moment to offer thoughts on how to improve these Stat Notes in 2015 (besides showing better results for the Phillies).

The Phillies finished in last place for the first time since 2000, four games behind the Mets. 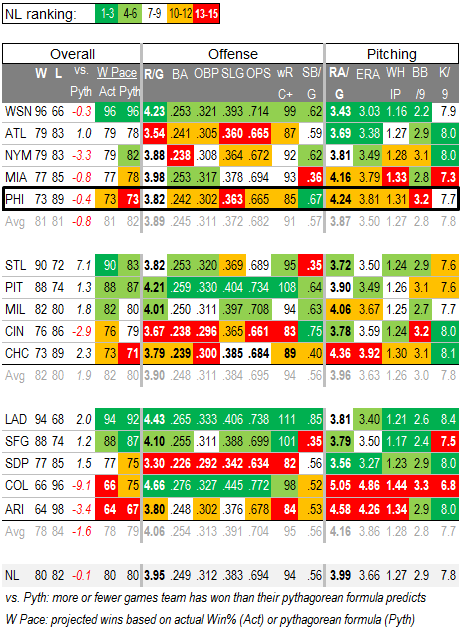 Much was made of the fact that aside from the division champion Nationals, every team in the Eastern division finished the year with a losing record.

Despite that, the East was by far the best division in the NL, based on run differential.

The NL Central had the most wins, averaging 81.8 per team, while the NL East averaged 80.8. However that was with the East teams playing on average about a game below their run differential and the pythagorean projection that that generates, while the Central teams played almost two games above their pythagorean, on average.

In terms of run differential the East was the best division in the NL, and even if you exclude the best team from each division, it's still close:

The Phillies finished in a 3-way tie for 7th worst record in MLB. Since both the White Sox and Cubs had worse records than the Phils in 2013, the Phils get the 9th spot. With the compensation pick added for the Astros' failure to sign #1 pick Brady Aiken, they wind up with the 10th pick overall:

For 2014, they were tied for the 7th most shutouts in MLB (with the Giants and Red Sox).

All told, there were 353 shutouts across MLB in 2014. That was the highest total in any season since 1972 (obviously there were fewer teams and fewer games then).

To compare to a recent year many Phillies fans remember fondly, across MLB there were 15% fewer runs scored this year than in 2007, and 45% more shutouts.

The Phils set a team record with 1306 strikeouts this year, but putting it that way is misleading. They were essentially average in how much they struck out: 21.1% of the time, compared to a league average of 20.9%.

Again comparing to 2007, there were 16% more strikeouts this year across MLB, versus just seven years ago.

After a brief surge above the NL average line in early September, the Phils' runs per game dipped again by the end of the season.

(dotted lines represent the NL average for each stat; runs are on the right axis, all other stats on the left)

Of the 14 Phillies with the most PAs in 2014, only four hit above the NL average at their respective positions.  All four were 35 years old or older.

One of those was Marlon Byrd, who finished at exactly the average preseason projection for OPS. Four Phils finished above those projections: Rollins, Revere, Nieves, and new Blue Jay John Mayberry Jr.

Only one Phil finished more than 1% above their 2011-2013 average OPS, and even with that Ben Revere was still 6% below the NL average OPS for Center Fielders.

Dom Brown obviously had a season to forget, even with a finish that at least approached league-average hitting (which given his defense is not enough to maintain a starting job):

And then there's the bottom of the list, where the team's young infielders both finished with OPS's in the .500s.

OPS progression through the season:

ERA progression through the season:

Kyle Kendrick's slight improvement down the stretch, coupled with A.J. Burnett's shaky outings, brought them to essentially the same ERA by the end of the season.

Both Buchanan and Hernandez (before his trade) provided better than expected results, with ERAs in the high 3's.

Cole Hamels, meanwhile, was in a league of his own:

Justin DeFratus turns 27 today. Also on this date, among other happenings:

1993: Curt Schilling goes the distance for the win, saving the Phils bullpen. He shut the Jays out on 5 hits, fanning 6. The Phils victory in Game 5 left them trailing the Blue Jays 3 games to 2.

2009: The Phillies hit 4 home runs, including 2 by Jayson Werth, to take the 2009 NLCS with a 10-4 win over Los Angeles. The 7 home runs hit by both teams set a new post-season record for a nine inning game.

2010: Despite pitching with a groin strain sustained in the second inning, Roy Halladay held the Giants in check for 6 innings and bullpen shut them out the rest of the way for a 4-2 victory in Game 5 of the NLCS. Jayson Werth hit a solo home run in the ninth, his NL-record 13th career post-season dinger.
[Werth is now 3rd all-time in the NL with 14, behind Pujols (18), and Beltran (16).]

Odd and interesting events on this date in Phillies history:broadandpattison.com

Phillies' milestones will be the topic of a separate post.