The Phillies called many places home before finally settling on Clearwater as their Spring Training site.

Share All sharing options for: Phillies: A History of Spring Training Sites

This is the 132nd year of the Phillies franchise, and they spent about half of that history roaming from one Spring Training home to another. Like some vacationers who visit many different spots when they're younger, until they finally find one they like the most and buy a vacation home there, the Phililes spent their first 64 years at at least 22 different locales. They finally settled in Clearwater in 1947, and have remained there since.
Some highlights from that nomadic history:
1883-97: After being formed in 1883, the Phillies trained most Springs at their regular season home, first Recreation Park, and from 1887 on at National League Park (later renamed Baker Bowl). They did travel at least one year in the late 1800s to Savannah, GA, and another to Jacksonville, FL.  Two other years are notable before the turn of the century:
1898: The Phillies, including Ed Delahanty, Nap Lajoie, and Elmer Flick, have Spring Training in Cape May, NJ under the shadow of the Spanish American War. Described in this interesting article in the Cape May Gazette (ignore the stilted writing and misspelled names).
1899: The following year, while spending the first of two straight Springs in Charlotte, NC, the Phillies begin an annual tradition by wearing green on St. Patrick's Day, as reported by Matt Gelb.
1925-27: Two years after it was built in 1923, the Phillies began a three-year stint at McKechnie Field in Bradenton, Florida. That park is still in use as the spring home of the Pirates; it's the oldest park used for spring training, and the third oldest stadium used by a major league team, after only Fenway Park (1912), and Wrigley Field (1914). These Phillies teams featured Cy Williams (for whom the Williams Shift was named), and a bunch of guys even avid fans of Phillies history have never heard of.
1943: Restrictions on nonessential travel during World War II forced the Phillies to stay close to home, and they spent Spring 1943 training at Hershey High School in Chocolatetown, USA.
1944-45: In November 1943 Commissioner Landis banned Phillies owner and President William D. Cox from baseball for betting on Phillies games during the '43 season (Landis had engineered the purchase by the 33-year old Cox a year earlier, preventing a sale to Bill Veeck). Cox was forced to sell the team again, and it was bought by Bob Carpenter Sr, who installed 28 year old Bob Jr. as president. That meant that something had to be done about the Wilmington Blue Rocks team, which was an A's affiliate and jointly owned by the Carpenters and Connie Mack. Mack sold his share to the Carpenters and so the Blue Rocks became a Phillies affiliate, and with travel restrictions still in force, the Phillies spent the 1944-45 Springs in Wilmington.
1947-54: The Phillies train in Clearwater for the first of what has now become 68 straight Springs, and it all began in a dilapidated ballpark called Clearwater Athletic Field. In this article on the Phils' spring training history, Rich Westcott quotes catcher Andy Seminick: "The field was nothing but sand and sea shells and it was brutal."
1955-2003: Jack Russell was a 15-year major league veteran who settled in Clearwater after retiring from baseball. He became a businessman and later a city commissioner, and in that role was a vocal proponent for a new ballpark to replace Athletic Field. His work finally paid off, and it opened in 1955.
(States appearing more than once are color coded) 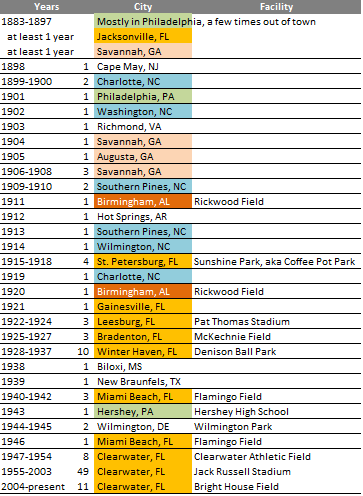