What would it take for the Phillies to at least be in contention in 2014? Do they have to play like it's 2008? Or is there a way for the current roster to compete even without the use of a time machine?

Share All sharing options for: What would it take for the Phillies to win 85 games in 2014?

Why 85? An 85-win pace likely means they are still in contention in July, and would then be buyers at the trade deadline to try to squeeze out a win or two more down the stretch (admittedly many would see this as a bad thing, but I've come to trust that they wouldn't damage future competitiveness). What's more, playing at an 85-win talent level could mean a 90-win pace or even more, given that some teams exceed their fWAR projections every year. 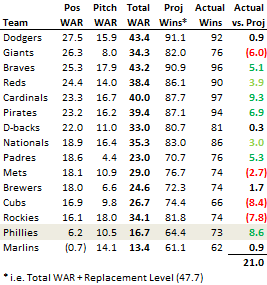 Note that the NL overall won 21 more games than its WAR totals would estimate. Meanwhile, AL teams won 21 fewer games. This is due to the perceived difference in talent level between the two leagues, which slightly depresses NL WAR.

The table below shows how the Phillies' FanGraphs WAR has been split between position players and pitchers since 2000, and how their total projected wins (when adding in the 48-win replacement level) have compared to actual wins. After winning within about 3 games of their fWAR projection for most of the decade, they have won 8 to 9 more than their projection in 3 of the last 4 years. However 2012 shows that it can also go the other way: 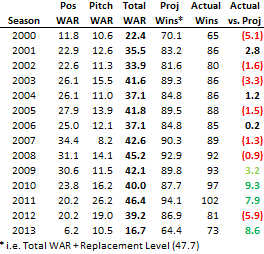 (the sum of Replacement level wins, Hitting/Fielding WAR, and Pitching WAR represent the projected number of wins in each year, and the line shows the actual wins) 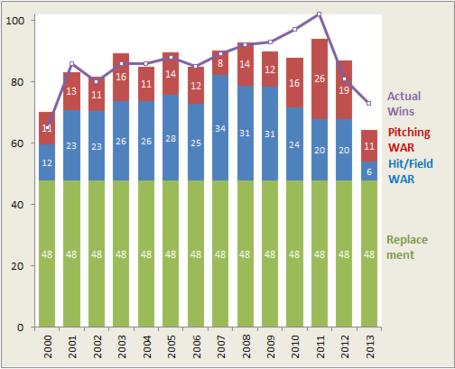 So what would individual players have to do for the Phillies to generate an 85-win level, at least on paper?

We will compare the 85-Win scenario to two measures of recent performance, and to two projections for 2014:

85W Scenario: Conceivable -- but in many cases optimistic -- projections for the 2014 roster that would add to 37.3 fWAR, and therefore project to 85 wins. These are based on an estimates for playing time (PAs or innings), which are typically similar to the Steamer playing time projections.

In other words, if every player duplicated their best year from the past three, they would generate 50.2 WAR (28.5 by position players, and 21.7 by pitchers). This includes both players in decline who are very unlikely to do that (e.g. Rollins, Ruiz), and young players who can almost certainly improve on their highest WAR to date if given enough playing time (Asche, MAG). With 50.2 total WAR, and the 47.7 replacement level, the Phils would be projected to win 98 games.

If every player's 2014 equaled their average annual WAR from the past three years, they would be projected to win 78 wins.

Below is the detail by player... 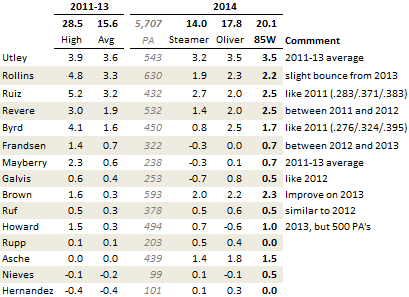 I started this before the Abreu signing, but I don't see it making a significant difference. 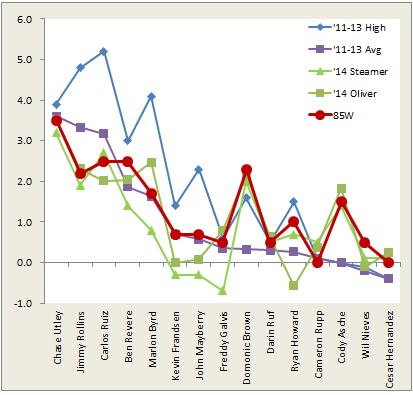 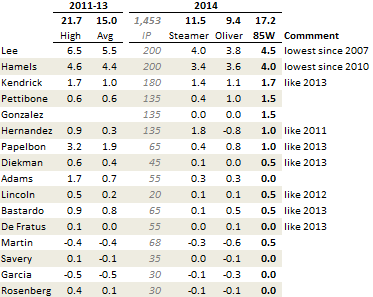 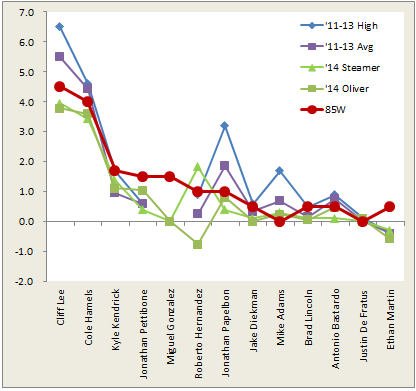 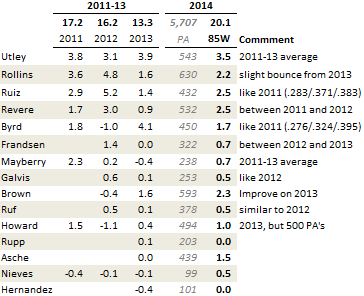 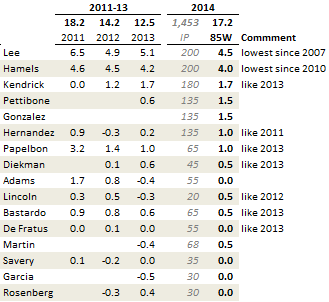