Beatings Will Continue Until the Offense Improves

The hitting has not been as bad as the results have shown, and there are reasons for optimism.

Share All sharing options for: Beatings Will Continue Until the Offense Improves

The Phillies' offense has been non-existent in the first two weeks of camp. By scoring only 1 run today, while the Red Sox were scoring 6, the Phils "passed" the Sox to move into last place in MLB this Spring (3.46 runs per game, to Boston's 3.58).

The Phils' offense is going to be average at best this year, and that's regardless of what they do Spring Training, but even in the dismal results of the first 13 games there have been a couple of rays of hope:

First, after being near the bottom in walks the last two years, the Phillies have the 7th highest walk rate in MLB so far, at 9.3%. That's still not enough to get their OBP out of last place though, thanks to a .194 batting average.

One other reason for optimism is largely a result of the fact that a 13-game sample is miniscule, and produces wacky results like the Red Sox being next to last in scoring:

A major reason the Phils' average is so low is that their batting average on balls in play (BABIP) is a miniscule .219, indicating that in addition to poor hitting, balls just haven't been finding many holes so far. The next lowest in baseball this Spring is .264. The lowest any MLB team had during the 2013 regular season was .275 (the Phils' BABIP last year was .293). A BABIP of .219 is not sustainable, no matter how badly a team hits, and the Phils' batting average cannot help but improve.

The high walk rate on the other hand, is less susceptible to statistical blips, and might be more sustainable. Sure, pitchers are still finding their command, but ALL teams are facing pitchers like that. Could it be that other teams' ability to draw walks will hold up better against true MLB-quality pitchers? Yes, it's possible. Nevertheless, again, with the small sample size warnings, a good sign. 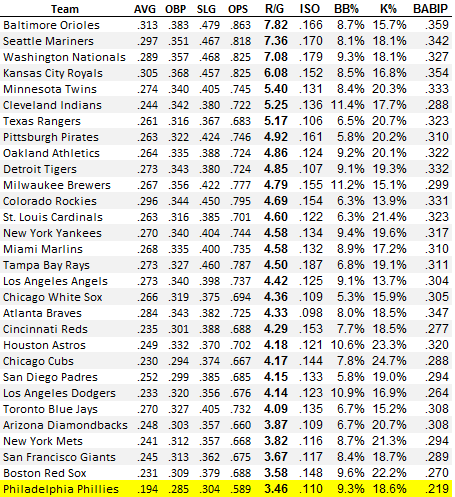 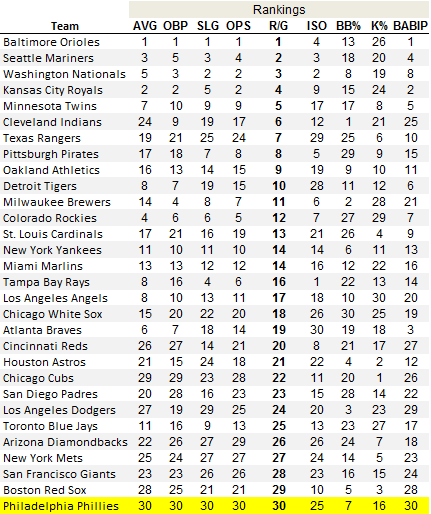