Looking for a place to practice hitting in and around Center City Philadelphia? Everybody Hits is your place.

Share All sharing options for: Everybody Hits Batting Cages

The Phillies are too depressing right now. Let's focus on something much more fun instead - going to the batting cages.

With Little League season approaching, I took my son and a friend to the batting cages on Saturday. We live in Center City Philadelphia, so a year ago, my options would have been driving into New Jersey or to the far reaches of the vast Northeast.

But now thanks to Everybody Hits Batting Cages, we were able to drive just a few minutes to get our chance to mash try to hit some baseballs. Located on the far north edge of Northern Liberties (and even that may be a stretch) on the 500 block of West Girard, Everybody Hits is celebrating its first year in existence.

Everybody Hits has three different cages with each having 7 different pitch options - three speeds of softball pitching, and four speeds of baseball.  The baseball speeds are 40, 50, 60, and 70 miles per hour, but I overheard the owner telling someone else that because of the distance of the machine (it's closer than the usual pitching mound), the ball seems like it's coming in about 10 to 15 miles per hour faster. 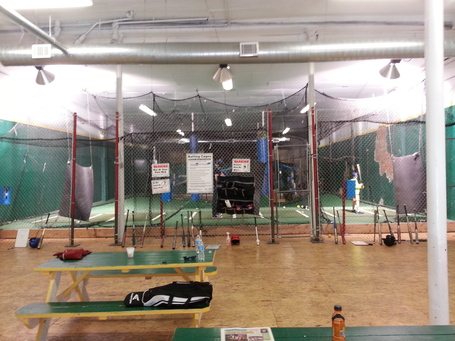 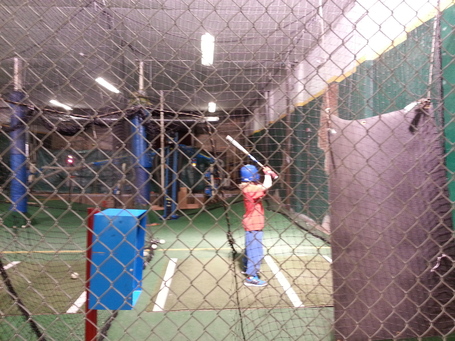 The prices are very reasonable - $2.25 for one round of 16 pitches and $10 for five rounds.  The owner also rents out cages for teams for a very good hourly rate of $60.

The space is pretty no frills.  There are a few long picnic-type tables with some basic seating to go with it.  Otherwise, it has an old warehouse feel to it.  Which is pretty much all you need for a batting cage.  You're not going there for a luxury spa experience, after all.  You're there to get some swings in and watch the others trying to do the same.  For that, this is perfect.

On Saturday afternoon, the three of us had 11 rounds, which took us about 40 minutes or so.  It wasn't that crowded, so we had one cage all to ourselves.  I was back there yesterday afternoon for my son's little league practice, and it was much more crowded.  Many people were there for after school/work practice.  Still, the wait was reasonable and we were able to get a bunch of rounds in.

The owner, another David, is a really nice guy.  He's a definite Phillies fan, as you can tell from the perfect name.  He has various team memorabilia scattered around the place.  There's a signed Lenny Dykstra jersey, two old Vet seats, some old Phillies baseball cards and banners, and a great wall of baseball cards (a really cool alternative to wallpaper).  David is a Phillies fan who filled a need for the city.  Kudos to him. 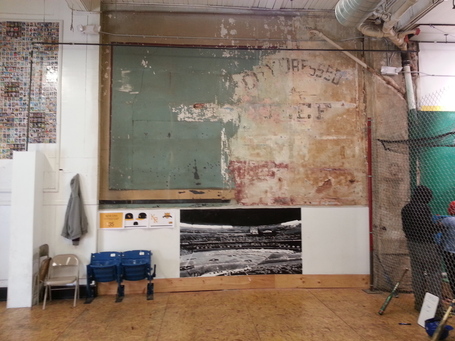 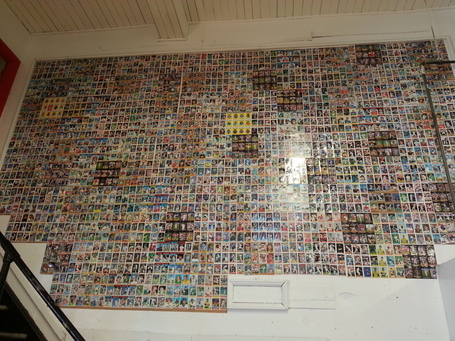 Oh, how'd we do, you ask?  Once my son realized that a 29 inch bat was better for him than a 30 inch one, he was hitting the ball nicely, especially considering it had been about 8 months since he last did it.  Me, well, I stepped in for two rounds each at the 50mph and 60mph speeds.  Once I got acclimated, I was hitting the 50mph pitches pretty well.  The 60mph pitches were harder, and I missed probably more pitches than I hit.  But, I did hit a few very solidly, and there's no two ways about it -- it's such a wonderful feeling.

I think my son and I are going to quickly become regulars . . . as should you.

Here are a few more pictures of the space.  According to David, the location had many past incarnations -- a hardware store (evident from the True Value sign), a silent movie theater, and a few other things I now forget. 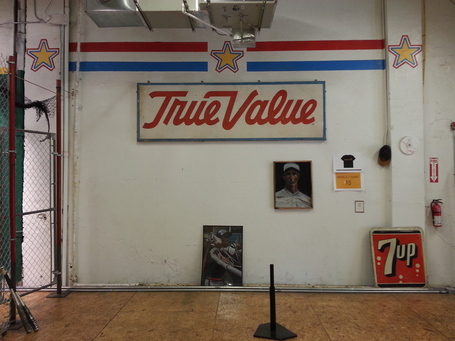 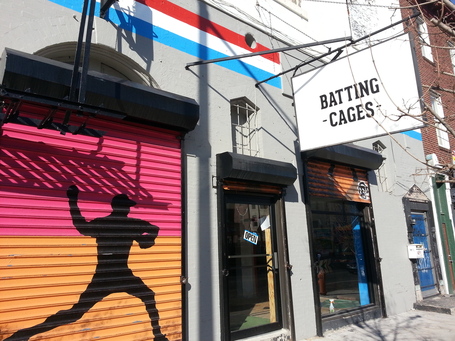