I can see your trepidation. Hearing "The 2014 Phillies" makes you want to run away. But you know what? You shouldn't.

Welcome to the 2014 Phillies season.

Now, I know things may not be going the way we thought they would. Back in 2011, with the greatest pitching rotation ever assembled, we thought by now that the Phillies would have at least one more World Series ring, and not be a shell of their former selves with their inadequate decision-making laid bare for all to see. This lovely print (made by the talented Chris Speakman of Sports Propaganda Art), which you see below hanging in my hallway, seems so long ago. 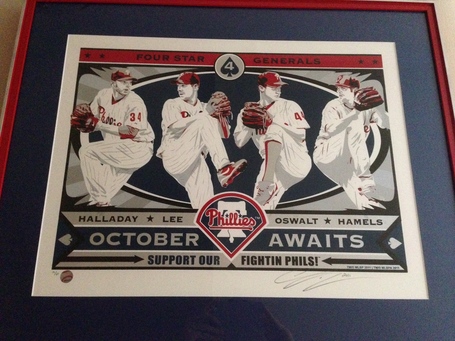 There are a fair amount of things to look forward to this season. Really! I'm not making that up! The Phillies as a cohesive unit (also known as a "team") may not do well together, but there are a lot of pieces of the larger "team" that are awesome and lovely and worthy of our optimism and praise.

But first, here's James Earl Jones, speaking directly to all of our hearts.

They will come, Ray. And though season ticket sales for the Phillies took a nosedive this offseason, fans will still come. The hardcore fans will never leave, those fans that care the most and care the loudest. More families will come, due to the convergence of lower ticket prices and a slightly emptier ballpark. The games will still be full of music and cheering and players we all love making the familiar motions that every ballplayer before them has made. The ass-shake in the batters box. The whooshing violence of the bat as it sails right through a Cliff Lee pitch. Mussing up the dirt on the mound. Sliding into home. Flipping to second. Throwing to first.

And those veteran players of ours may just be old to some people, but to us, they're the heart and soul of our franchise. They may not play the way they once did, but hell, I'm only 30 and I know for sure I can't do a number of things as well as I could when I was 24. And I'm not even a baseball player who is paid to stay in shape! We get to see Ryan Howard hit home runs, which if you don't enjoy watching, you and I need to sit down and have a serious, heart-to-heart about your life priorities and how you experience joy, because you're doing it wrong. Now that the season is starting, we all get to forget the bullshit surrounding Jimmy Rollins, the greatest shortstop the Phillies have ever had, and the longest tenured Philadelphia athlete. And forgetting that bullshit is good, because if I think too long about how the ownership wants to trade him, it makes me angry. How about Cole Hamels, who at 30 is considered a veteran on this team. That's how long he's been around! And even though he won't see any game action until May, he's Cole Hamels and he'll be great. I am absolutely confident of that. We can't forget about Cliff Lee, bearded wonder and strike throwing machine. Watching him pitch is a treat wrapped up in a delight and stuffed into happiness. A joy-ducken if you will. Of course, there's Carlos Ruiz, who handles the pitching staff with aplomb, and handles a bat just as well. And Chase Utley! Oh God, Chase Utley. Chase Utley, the beating heart of my baseball fandom. I treasure every moment of Chase Utley baseball time, as should everyone.

There aren't just veterans, either. They actually have some guys under 30, who are considered "young". The Phillies didn't trade away every single one of their young players, though it certainly felt that way. There's Cody Asche, starting at third base after several years positional unrest for the Phillies. Asche's young and will keep getting better, and no matter what he'll look better than Michael Young, "third baseman" of 2013. Center fielder Ben Revere, who is irrepressible and excited about everything. Ben Revere is my sprit animal. And Domonic Brown, who broke out last year in his first full season in the majors, finally. With the expectations of a top prospect gone, Dom can finally play his game, and that's all I've ever wanted. I can't forget about my personal favorite, Jake Diekman, the sidearming reliever who got his control issues in check and could be an important bullpen piece this year. And that's not all! Maikel Franco and Jesse Biddle are waiting in the wings, hoping to build on their previous seasons and eventually get a look with the big club. And a little further down the line is 2013 first-rounder J.P. Crawford, who gives me all sort of excited, hopeful feelings.

I could make predictions, but I don't want to do that today. Today, despite the snow falling from the sky as recently as an hour ago (THANKS, EARTH), is Opening Day. Anything can happen. We all think we have a good idea of how the season will go for our fightin' Phils, but even if we're right, we're also wrong. Because it never happens the way we thought it would. Did 2008 go how you thought? How about 2009? What about 2010 and the TWO NO-HITTERS THAT ROY HALLADAY THREW? Or 2011 and the 102 games the Phillies won? And 2012 with its... uh... surprising and unpredictable badness? You know, I think I'll stop at 2011. My point is that like everything else in life, it doesn't matter how much information we have or what the stats say is going to happen. The season will play out however it's meant to (it's been "Written in the Stars" ha ha amirite?), and in ways we could never imagine.

And for that, I'm thankful. We think we know what's going to happen with the 2014 Phillies, and maybe we do, but I'm banking on the fact that the universe has a few red-pinstriped surprises up its sleeve for us. I wouldn't miss it for anything.