Who the hell are these people.

Sandberg will be establishing himself in his first full year as a Major League manager, and it's still kind of surreal. It takes a second to look at him and realize he's not the bench coach or something.

He's got more youth in his face than we're used to seeing at the position, and he's been running an aggressive camp of early workouts and hard running. How that looks in the context of a general spring training workout, I have no idea, but it's certainly more running than I do on a normal basis.

One thing to look at is the kind of player Sandberg was in his day: a tough second baseman with a sick glove whose power-hitting surprised a lot of people. The kind of player you wish still existed to this day.

Based on the hardness of their noses, there are certain members of this team who may gel well with the way Sandberg believes the game should be played.

But speaking of which, there was Sandberg's Hall of Fame acceptance speech in 2005 that very clearly indicated his passion for balling on the small side:

"I didn't play the game right because I saw a reward at the end of the tunnel. I played it right because that's what you're supposed to do -- play it right and with respect. If this validates anything, it's that learning how to bunt and hit and run and turning two is more important than knowing where to find the little red light at the dug out camera."

He also mentioned a lot - like... a lot - of current and former Phillies employees:

"If this validates anything, it's that guys who taught me the game -- coaches like Billy Williams, Chuck Cottier, John Vukovich, Jose Martinez, Billy Connors, and Ruben Amaro; teammates like Larry Bowa who took me under his wing..."

"There was Gary Matthews, the "Sarge." He wouldn't let me down. He was always in the on-deck circle when I was batting, and if there was a pitch that almost hit me or knocked me down, Sarge would be halfway to the mound and screaming at the pitcher to, "Get the ball over the plate or face the consequences."

I know, right? Can you imagine Sarge correctly pronouncing the word "consequences?"

Sandberg's closest links to the Phillies are guys like Vukovich (RIP), Bowa, and Amaro... guys who you wouldn't necessarily put on the cutting edge of MLB managing in 2014, but certainly who have experience and intelligence to share. It is again a reflection of his style - grittiness and aggressiveness, with some old school strategy that some would argue is not the best way to execute an offense.

But let's get to the most important aspect of Sandberg's management style: How willing is he to scream at people when feeling slighted?

Here he is in 2009 as manager of the Tennessee Smokies:

There is a distinct pattern to Sandberg's umpire hostility, one that involves classics like a great amount of aggression to head garments and a flailing of the arms similar to a town drunk directing traffic.

While a seeming rational individual, Sandberg clearly has the capacity to scream wet hot bile in somebody's face. Which means that his second-in-command should counter this with a calm, soothing personality.

Well, he and Sandberg are best buds, so it makes sense that the new manager wants his compadre close at hand. Bowa, as we all know, spent some time making enemies in Philadelphia as the team's manager until 2004. He failed to see eye-to-eye with everybody from Scott Rolen to Jimmy Rollins, but still won a Manager of the Year award, and was around when the current generation still dreamed of the day they'd be a grizzled, wounded bunch of veterans that nobody believed in.

To his credit, Bowa's issues with current and former Phillies seem long forgotten. I imagine Bowa will cause at least two stinks this season, for some reason or another. Maybe we'll get lucky and he'll headbutt Jonathan Papelbon.

"Old school" has a negative connotation attached to it these days, but the idea of having a raging lunatic in the clubhouse appeals to me, at least, if I try to think about it positively, which I did in order to write this sentence. Accusations of complacency have flown fast and loose around the Phillies for years now, and the excited youths are now calm veterans, with a new class of younglings to inspire. Maybe having a furious father figure around could at least spark some excitement in the locker room.

Have you ever heard Bob McClure talk about baseball?

"It goes fast," McClure said. "It's almost like being in a convertible car in the middle of an arena with 30,000 people yelling and screaming at you. It's intense. Now put that car on a racetrack and go 200 miles per hour. And trying to make your car fit through two cars on the first turn. Well, that's what it's like when you first come up. It's going fast. And a lot of guys are afraid to make mistakes when they first come up."

Bob was describing the experiences of the Phillies' many young bullpen arms, for whom he has been hard at work, attempting to foster a relaxed environment in which they can escape the shrieking madness that is professional baseball.

He was the pitching coach for the 2006-11 Royals, who finished with more than 70 wins twice. He was then fired and eventually got picked up by the Red Sox, who promoted him to pitching coach under Bobby Valentine's regime. This went horribly for basically everyone, and when the team was exploded in the offseason, Bob had already been out of town since August, having been fired again.

And that brings him to the Phillies, the first team from which he hasn't been fired yet. The Phillies' pitching coach search went on for some time, due to a shortage of worthy candidates who actually wanted the job.

Bob comes from the Keith Hernandez school of mustaching, having known the Mets legend since high school, and given up a critical hit to him in Game 7 of the 1982 World Series.

Hispanic Hall of Famer, Phillies Wall of Famer, interim Orioles manager, and Phillies World Series outfielder,Samuel is an experienced professional who understands the nuances of base running; a presence nice to have on board, especially in the post-Davey Lopes era. 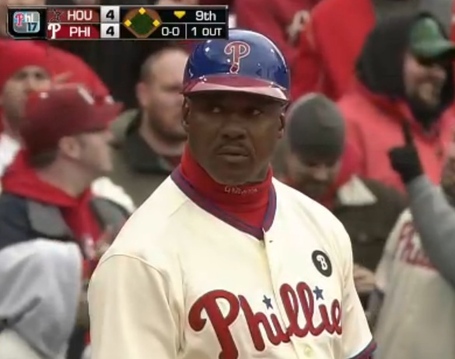 And here he is bellowing in horror at Antonio Bastardo, exactly one entire NL East championship-season later: 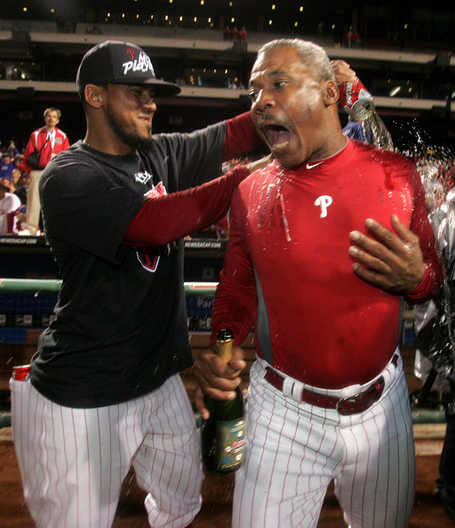 Though there are strikes against him - he also served as the interpreter for Michael Martinez, which technically counts as "enabling."

Mackanin might be the longest tenured coach on the staff, having served as bench coach under Charlie Manuel since 2009. He was 'Bob McClure'd' by the Phillies in October 2012, as part of a mass firing of the coaching staff that somehow did not get the team back into the playoffs.

In 2011, Mackanin, who has high praise in the industry, was interviewed for the Red Sox managerial position that wound up going to Bobby Valentine. Bob McClure can fill Mackanin in on how all that went.

Now, he's back, and based on your interpretation of the coaching hierarchy, he is the recipient of a demotion . promotion, or no-motion. Instead of holding the clipboard when Charlie Manuel feels ornery, he'll be deciding whether or not Marlon Byrd can outrun a corner outfielder's arm. Some might say that's an even more obvious decision.

Steve will be playing the role of "Guy who is fired in July when the team is 27th in runs scored."

What's interesting about Steve is that two times in his 12-year playing career, he finished in the top ten in OBP. That's a stat that some of the Phillies could stand to learn a thing or two about. With Henderson and Bobby Abreu skulking about, you never know who might accidentally reach first base.

Henderson also narrowly missed out on the 1977 NL Rookie of the Year award to Andre Dawson, whose candidacy for the Hall of Fame was advocated by Ryne Sandberg during his own HoF speech, quoted above.

Whether the Phillies' media intern bothered to fill out the assistant hitting coach's bio page or not, it's an impressive resume behind Mizerock: He's been coaching through the minor leagues for years, leaving naught but championships and Manager of the Year awards in his wake. This comes after a playing career of backup catching gigs with the Astros and Braves, and a brief stint as the interim manager of the 2002 Royals, during which the team suffered eight of their 100+ losses.

He has been immortalized as a bobblehead, that makes him look a little completely wasted.