Early results show the Phils are drawing walks and getting on base better than last year. But the pitching is offsetting those gains, and then some.

To get it out of the way, I'll just say it here and it applies to everything below: it's very early, and this is only nine games' worth of stats. Any nine-game stretch over the course of a season is liable to include crazy, fluky, unsustainable numbers. 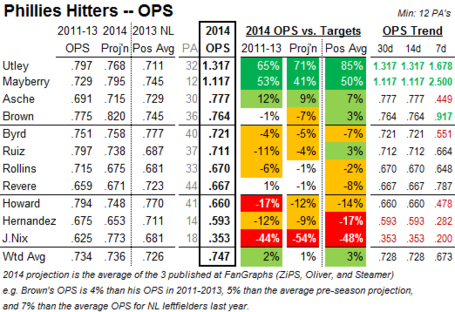 After ranking near the bottom in getting on base last year, the Phillies have the second highest OBP in the NL so far.  That's partly due to a batting average that's 5th, but also the 3rd highest walk rate in the league. And that's helped by the fact that they've seen the highest number of pitches per plate appearance so far, after being about average in that category in 2013. Seeing more pitches means deeper counts and therefore more strikeouts, and sure enough they've struck out a higher rate so far than last year.

Isolated power, and more specifically Home Runs, are both around the middle of the pack. 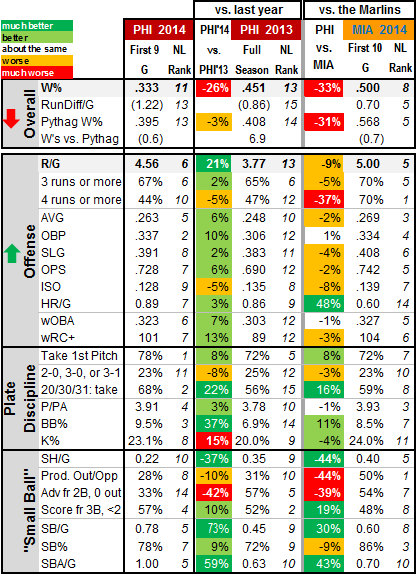 As shown above the Phils are scoring 21% more than last year so far. Unfortunately, they're allowing 25% more runs.

Starters are 4th in FIP, and 8th in xFIP, although it's not showing up in ERA, and that may be due to shoddy defense.

The bullpen on the other hand looks bad so far no matter how you look at it. 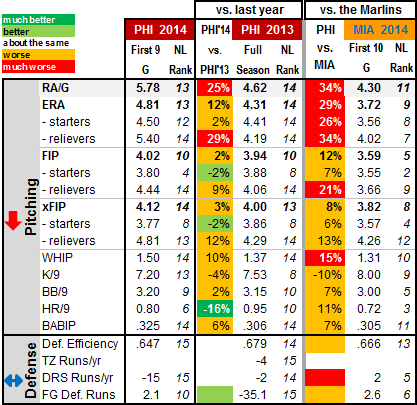 Colorado leads the league in scoring, and is second in most runs allowed. 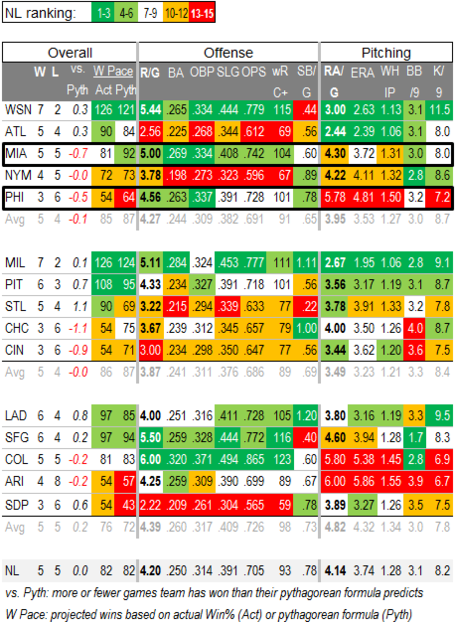 Jimmy Rollins- Rollins' next walk (4th this year) will tie Willie Puddin' Head Jones (third baseman of the 1950s Phils), for 6th most in Phillies history, with 693.

Chase Utley- His first sacrifice fly of the year will break a tie with Garry Maddox to take sole possession of 4th all-time at 52, behind only Mike Schmidt (108), Bobby Abreu (54), and Greg Luzinski (53). Riveting. By the way, the Phillies are the only team in the NL without a sac fly so far (they're still 4th in the NL in scoring runners from 3rd with less than two out). Boston is the only team in the AL without a sac fly.

Cliff Lee
More oddities than milestones, but both of Lee's first two games were strange ones:

- In his first start, Lee became just the third pitcher in MLB history to allow eight earned runs on Opening Day and still get the Win (there were two others who allowed eight total runs including unearned). He was also the first to do that in 77 years.

- In his second start, he became the first pitcher in almost nine years to pitch at least seven scoreless innings and give up 10+ hits.