Phillies Stat Notes: the Word of the day is Patience

The Phillies are seeing more pitches and walking more, and as a result are leading the NL in On Base Percentage.

Share All sharing options for: Phillies Stat Notes: the Word of the day is Patience

Tony Gwynn is filling in nicely, thanks in part to a .545 BABIP. 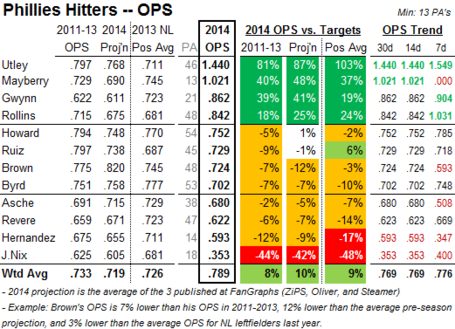 The Phils lead the NL in OBP after two weeks, and a big reason for that is that they also lead the league in walking. 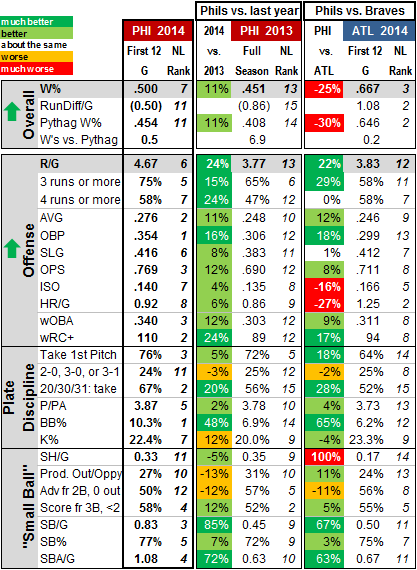 As in years past, the Phils continue being among the least likely in the league to swing at the first pitch (3rd this year, taking 76% of first pitches). Despite that, they are only 11th and somewhat below average in getting into hitters' counts of 2-0, 3-0, or 3-1, but unlike in years past they have been quite patient in those counts. Whereas in the past they've primarily used hitters' counts to look for a pitch to drive, in these first 12 games they have been more likely than in the past to take a pitch -- they are second in the NL in taking pitches in those hitters' counts.

Everyone in the Phillies' regular lineup with the exception of Ben Revere is walking more so far than they have on average over the past three years (again, small sample warning for this year): 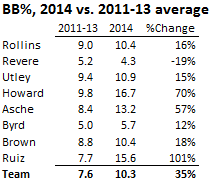 The Braves on the other hand are coming in with the 3rd worst OBP, and 4th worst runs per game. That seems to be changing however, as they scored 7, 6, and 10 runs in sweeping the weekend series against the Nationals.

Phillies starters and relievers have been about equally bad thus far. In fact, somewhat surprisingly, the bullpen's FIP is actually lower than the starting staff's in the first 12 games.

Defensive stats continue tracking with the eye test, consistently ranking near the bottom in the two-week sample.

Atlanta has allowed the 2nd fewest runs in the league to date, trailing only Milwaukee. They've been helped by a tiny 6.0% HR/FB rate, and when adjusting for that, their starters' xFIP is ranked near the bottom. 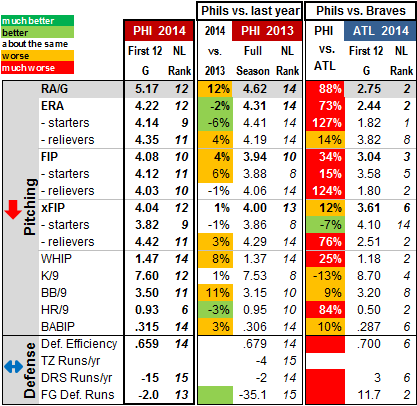 Note the dearth of hitting in the NL Central so far, with the exception of the red-hot Brewers. Also the lack of good pitching so far in the NL East: 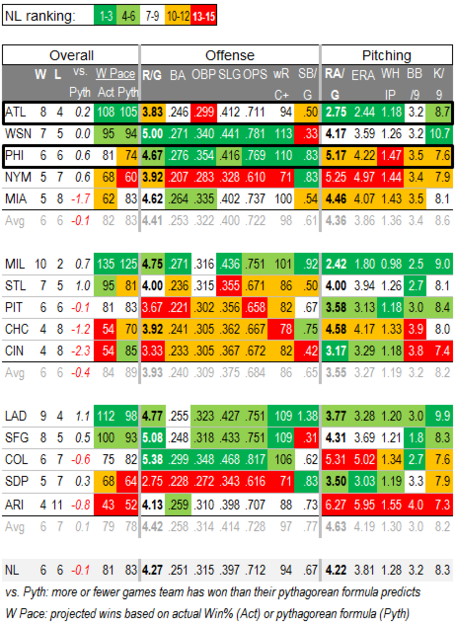 Jimmy Rollins- With two walks on Friday, Rollins passed Willie Puddin' Head Jones (third baseman of the 1950s Phils), for 6th most in Phillies history, at 694.

Chase Utley- His first sacrifice fly of the year will break a tie with Garry Maddox to take sole possession of 4th all-time at 52, behind only Mike Schmidt (108), Bobby Abreu (54), and Greg Luzinski (53). Riveting. By the way, the Phillies are the only team in the NL without a sac fly so far (they're still 4th in the NL in scoring runners from 3rd with less than two out). Boston is the only team in the AL without a sac fly.

Jonathan Papelbon
- With his 3rd save of the year on Sunday, Papelbon tied Armando Benitez for 26th All-time.

With that hit, Ibanez also became the first player in MLB history to reach 2,000 career hits after having less than 400 through his 29 season -- he had only 193.