Everyone and his mother is hitting Cliff Lee this year. Will it continue?

How has Cliff Lee pitched so far this year? Well, depends what you like to look at. If you're a traditionalist, you look at his 2-2 record and 4.00 ERA and think he's been quite mediocre. If you're into more advanced stats, you point to his 2.16 FIP and 0.9 fWAR and say he's been one of the best in baseball.

Here at TGP, we're generally more interested in the advanced stats, which indicate that Lee is doing fine and that his more traditional metrics should come in line as the season progresses (no guarantee though!).

But one of the oddities of Lee's start to the season is how hittable he has been. So far, in his 27 innings, he has given up a whopping 40 hits. That's just under 1.5 hits per inning.

This is not the Cliff Lee that we've come to know and love. In fact, for five of the last six seasons, Lee has given up far fewer hits than innings pitched. Only in 2009 did he give up more, and that wasn't by much -- 245 hits in 231.7 innings.

In fact, the four game stretch that Lee has gone through here is unlike any other four game stretch he's had in the past four years. Since 2010, Lee has never given up more than 36 hits in four consecutive games. And only once did he eclipse his current 1.5 hits per inning. (Over four starts in the second half of August 2010, when he was with the Texas Rangers, Lee gave up 1.57 hits per inning.)

Usually, Lee is stingy with hits. So what explains his over-generosity now? As usual, we can point to BABIP. On balls in play, opponents are batting an absurd .432 so far this year against Lee. The highest Lee ever posted before was .315 (in 2009), and 3 of the past 4 years he's been under .300. His .432 will regress, and he will not continue to give up as many hits as he has.

But has something been changing with Lee that might contribute to more hits, even with a more reasonable BABIP? Looking at Lee's batted ball stats, he has developed from a fly ball pitcher to a ground ball pitcher. And this year, he's been an extreme ground ball pitcher. Here's a graph of his GB/FB ratio over his 13 seasons: 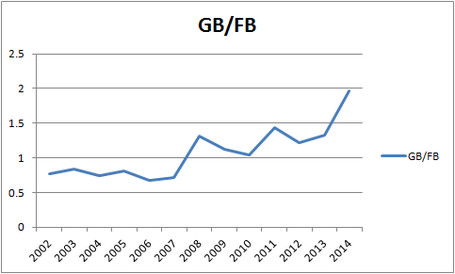 So far this year, Lee has a 1.96 GB/FB ratio. That's a huge outlier that probably will not continue, but it is in keeping with a steady increase over his career. 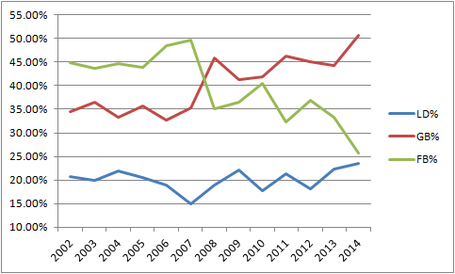 The huge increase in ground balls and decrease in fly balls is the reason for the change in GB/FB ratio in the first chart. But, at the same time that he's become more of a ground ball pitcher, he's seen an increasing percentage of line drives as well. The chart may obscure it, but in particular, his past five years (including 2014 so far) have been almost a steady increase: 17.7%, 21.3%, 18.1%, 22.4%, and 23.6%.

More line drives, fewer fly balls, and more ground balls - this is where Lee seems to be going, with 2014 so far an extreme version of that. It stands to reason that a pitcher with this profile is going to give up more hits, as line drives are the worst for pitchers, both in terms of turning them into outs and becoming runs. The same articles linked in the previous sentence show that ground balls also are worse than fly balls in terms of producing outs, especially for a low home run pitcher like Lee. As his batted ball profile progresses in the direction these charts indicate, it's very possible that we see a more hittable Lee.

Of course, it's also very possible, and maybe even more likely, that these four games are about nothing more than a small sample size and he'll regress to being his normal, unhittable self.

However, I think there are three reasons that may not be the case: what he's done so far this season has very little precedent over his starts in the past four years, his profile is steadily progressing in this direction, and the Phillies defense is not good.

These three things combined may indicate that Lee is becoming a more hittable pitcher this year.