Mike Schmidt hit the 500th home run of his great career 27 years ago today, Cliff Lee is cornering the market on odd games, and more...

There is basically Chase Utley and everyone else. By fWAR, Utley is at 1.6, Rollins 0.5, and no one else has more than 0.2. Another way to look at it, Phils position players have accumulated 1.8 fWAR -- 1.6 by Utley, and 0.2 by everyone else combined. 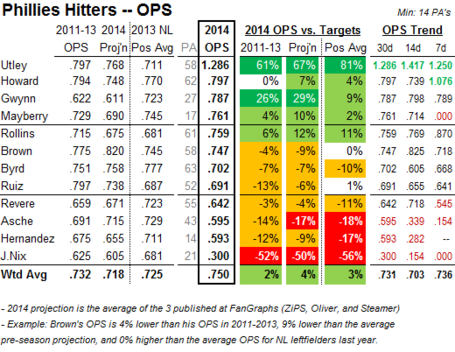 The Phillies have a .332 BABIP so far, the 2nd highest in the majors behind only Miami's .340. That's propping up both their batting average and their OBP. Even with the apparently improved plate discipline, unless they can start hitting with some power and improve their below-average ISO, there is no way the offense can keep up the 4.2 runs per game that they've averaged to date. 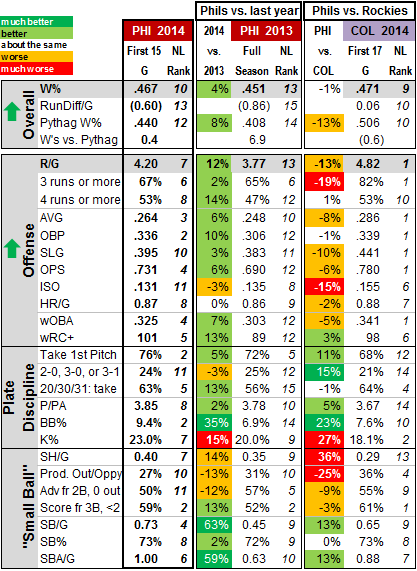 The Rockies lead the NL in several offensive categories so far, but they've been like two different teams in their home games and in their away games in the early going: 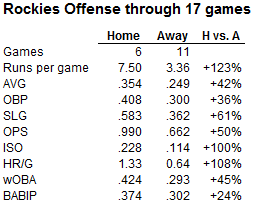 They've shown twice as much power at home (reflected in their ISO and HRs), and scored more than twice as many runs.

Overall, their plate discipline stats are mostly below average: they're aggressive and don't see a lot of pitches, and as a result they haven't run enough deep counts to strike out a lot, and so have the 2nd lowest K rate in the NL.

Interesting that wRC+, which accounts for how hitter friendly a team's home park is, is 6th in the NL, despite the otherwise off-the-charts offensive stats.

Despite giving up only one run in the last two games combined, Phils pitching is still near the bottom in runs allowed and ERA, although their starters have moved up to 7th in the NL in ERA, and 6th in xFIP: 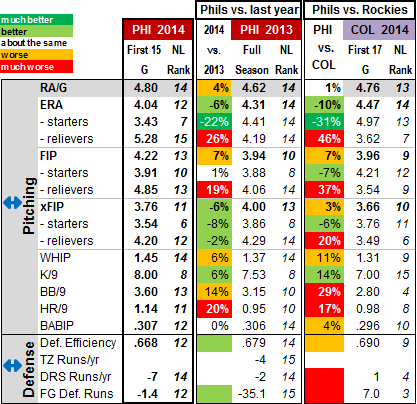 Unlike those for their offense, the Rockies' pitching stats (other than FIP) are not dramatically different between Home and Away:

The NL East has had the best record of the three divisions so far by a slight margin, although their pythagorean record still trails the Central: 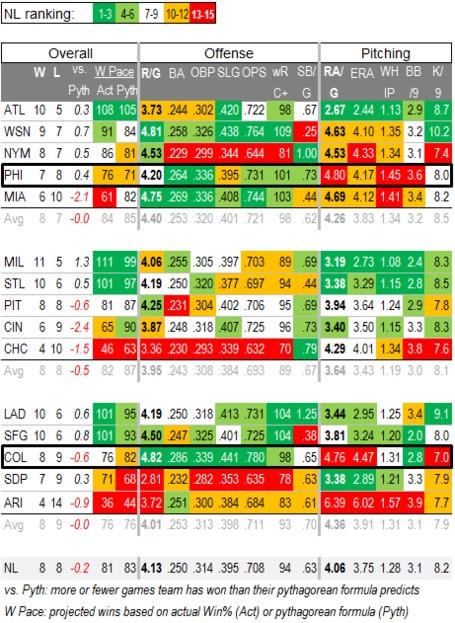 Twenty-seven years ago today on 4/18/1987, Mike Schmidt hit the 500th home run of his career at Three Rivers Stadium in Pittsburgh off Don Robinson. The 3-run shot in the 9th put the Phillies ahead to stay.

Schmidt became the 14th player in history to hit 500. The all-time career HR list when he retired two years later:

Chase Utley
- Utley needs 8 more total bases (48 on the year) to tie Bobby Abreu for 8th most in Phillies history, at 2,491.
- His first sacrifice fly of the year will break a tie with Garry Maddox to take sole possession of 4th all-time at 52, behind only Mike Schmidt (108), Bobby Abreu (54), and Greg Luzinski (53). Riveting. By the way, the Phillies are the only team in the NL without a sac fly so far (they're still 4th in the NL in scoring runners from 3rd with less than two out). Boston is the only team in the AL without a sac fly.

Cliff Lee
- Lee needs 12 more strikeouts (40 total this year) to tie Larry Christenson for 11th most in Phillies history, at 781.

In addition, Lee's unusual starts continue. Three of his first four starts have been remarkable in some way:

- In his first start, Lee became the first pitcher in 77 years (and just the third in MLB history to allow eight earned runs on Opening Day and still get the Win.
- In his second start, he became the first pitcher in almost nine years to finish with at least seven scoreless innings while giving up 10+ hits.
- His fourth start, on Wednesday, was only the 4th time since 2000 that a pitcher struck out 13 or more only to lose a game 1-0. It was last done by Lee himself in his last start of last season on 9/27/13, and the other two were by Pedro Martinez in 2000, and James Shields in 2012. Complete list since 1914.

B.J. Rosenberg
- Facing only three batters and giving up home runs to all three is now something that has happened. Before B.J., no one -- ever -- had done that before.

The data for this level of detail in bb-ref's Play Index feature goes back to 1914. In those 100+ years, there have been 44 occasions where pitchers faced 2 batters and gave up home runs to both, and there have been only 6 times where a pitcher faced 4 batters and gave up homers to three of them, but B.J.'s special brand of hat trick had never been "accomplished" before Monday night.

Also, there have been 13 times with a pitcher facing 10 or fewer and giving up 4 home runs, including by the Phillies' own Brian Sanchez in 2007.