During an action-packed afternoon in Denver, the Phillies and Rockies swapped the lead a few times, Ryan Howard almost hit for the cycle, and Jonathan Papelbon took the scenic route to the save.

Some "real talk" for everyone for a second, but the Phillies are going to be bad this year. We’ll see some fun games and we’ll see a few big moments, but ultimately, we’re going to watch a lot of garbage.

But to quote the birthday boy Killer Mike, "That’s life!" It’s going to be a long season, so let’s have some fun with the cards we’ve dealt – even though those cards include the Joker and one of those jawns that say "Thank you for buying Bicycle Cards."

[video below decidedly NSFW, unless you work at a place with headphones -ed.]

Whatever, let’s have some fun. And the Phillies did have some fun, despite the disappointing pitching from everyone not named Hollands, by earning a 10-9 victory to avoid the series sweep.

Coming into this game, unless it was Jimmy or Chase, the Phillies weren’t even hitting a beach ball on a tee. We had Ben Revere laying down wussy grounders, Domonic Brown swinging at every first pitch, Carlos Ruiz barely staying above .200, and Cody Asche taking hacks like he wants nothing more than a return visit to Lehigh Valley.

But the Phillies managed to make it exciting. They came off their "Rocky Mountain High" (hey look, a pot reference!) and hit a bunch of balls into play where the Rockies could not get to them. Ryan Howard missed a cycle by either a bounce of the ball or the whims of the official scorer* and Jimmy Rollins stroked a solo homerun during the top of first inning.

(*Note: During the All-Star Break or offseason, maybe Justin and I should get a 30-pack case of Yuengling cans and watch every Ryan Howard triple. We’ll have a studio audience, do some commentary, and make a video out of it.)

Ben Revere and Marlon Byrd also had strong days at the plate. Revere had two hits, while Byrd mustered two of his own, as well as an RBI. The team – after going without during their first 17 games – got their first three sacrifice flys of the season.

Although basically every homer is "earned," Jimmy really earned this one after one hell of an at-bat, displaying patience and a very selective eye. If even half of your guys are taking at-bats like this, your team is in a pretty good place.

But unfortunately this isn’t the case. And maybe the bats truly woke up today (let’s hope!), but I’m putting even money on the Rockies pitching having a bad day as well. Taking nothing away from the Phillies – cuz you still need a certain level of quality to feast on meatballs served up by a bullpen – this was a pretty sloppy game from both sides.

Our extremely well paid closer, Jonathan Papelbon protected a one-run lead in the ninth for this fifth save on the season. I hope he sends some flowers or chocolates to Freddy Galvis and John Mayberry, Jr. though, because it was their bang-bang play, with the latter digging out the ball, which was able to seal the win.

Next it’s off to the land of beach balls and fedoras in a baseball stadium, with the Phillies facing the Dodgers starting tomorrow. If you’re going to be at the game, try out this hot dog-meets-cheesesteak. Forget about all of the other amazing food from Philadelphia, here’s a lazy variation on a cheesesteak from Cheesesteakadelphia! 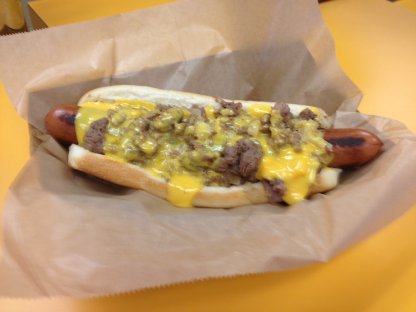 How fitting! It even looks like the Rocky Mountains.