The Phillies' luck on balls in play has largely disappeared in recent games, and so have their improved plate discipline numbers. With Hamels back they look to bolster the rotation and minimize exposure to the bullpen.

Share All sharing options for: Phillies Stat Notes: Luck (and Discipline?) Slipping Away

Rearranging a bit this time to go from the general (standings) to the specific (players).

The Phillies fell back to last place, and at the moment are projected to win one less than they did last year. Their pythagorean projection based on their run differential is even worse, and third from last in the NL, just barely ahead of the Cubs.

It's a good thing Arizona is off their horrendous start, or the Phils would be last in both runs allowed and ERA.

LA meanwhile is right where you would expect, a game ahead of San Francisco in the West, and doing it with a balance of above average hitting and pitching. 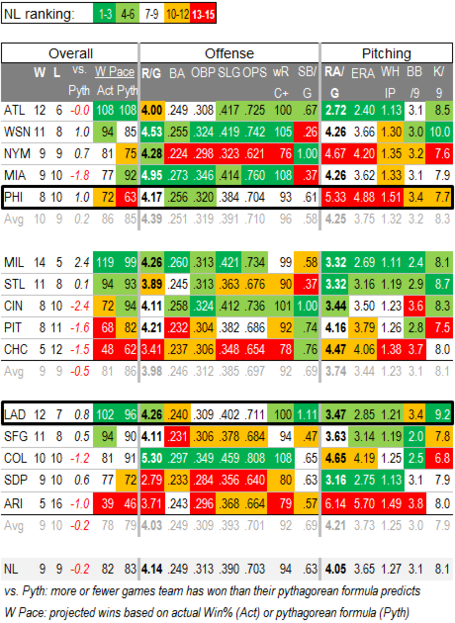 The last several games have caused a couple of significant shifts in the Phillies' total stats, as they are wont to do this early in the season:

And while their runs per game is still at exactly the middle of the pack, that average belies the fact that they've been more inconsistent than most teams, and so their percentage of games with 3+ or 4+ runs scored (i.e. where they give the staff a fighting chance) has been below average. 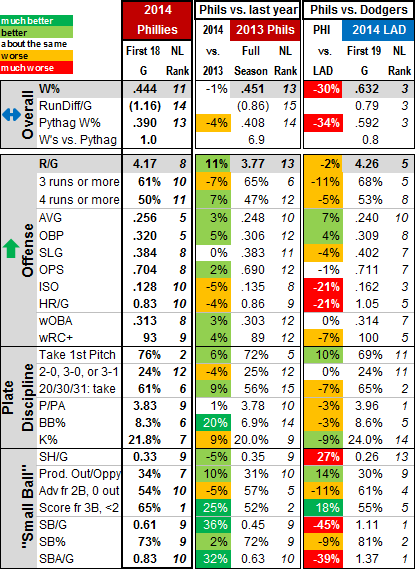 While the Phils and Dodgers haven't been very different at the plate so far, the Dodgers have had the much better pitching.

The Phillies will miss Clayton Kershaw, who is still on the DL with a strained shoulder. 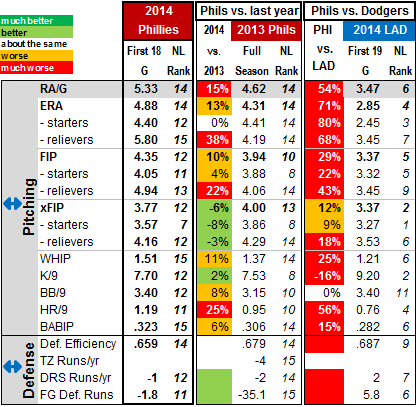 Utley was finally surpassed for the fWAR leadership, but since it was by Mike Trout, he still leads all homo sapiens. Rollins is 10th in the majors. 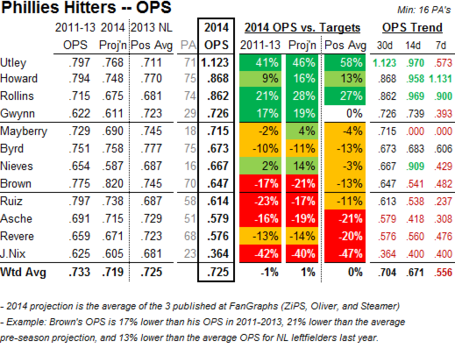 Chase Utley- Utley needs five more total bases (48 on the year) to tie Bobby Abreu for 8th most in Phillies history, at 2,491.- His sacrifice fly on Sunday broke a tie with Garry Maddox to take sole possession of 4th on the Phillies all-time list at 52. His next one will tie Greg Luzinski for 3rd, leaving him behind only Mike Schmidt (108), and Bobby Abreu (54).

Cliff Lee- Lee needs 12 more strikeouts (40 total this year) to tie Larry Christenson for 11th most in Phillies history, at 781.