36 Years of the Phillie Phanatic

36 years ago today, the Phillie Phanatic made his debut. The world of giant green fake birds from the Galapagos Islands has never been the same since.

Share All sharing options for: 36 Years of the Phillie Phanatic

I don't throw the words "national treasure" around very often. "Great American Hero" is said with reverence as well. And "an inspiration to all who aspire to do great things" is quite a superlative to lay at the feet of anyone. Or anything.

Yet, today, I blog here before you firm in the conviction that the Phillie Phanatic is the greatest thing to ever happen to people.

OK, that and modern irrigation systems. But that's it.

I mention all this because today is a special day in the history of the Phanatic.

The Phillie Phanatic made his debut on this day in 1978. pic.twitter.com/COmeaNZmNR

Yes, it's been 36 years since the Phanatic first made his debut at Veterans Stadium. He was the brainchild of Phillies Chairman Bill Giles, spurred on mainly by an accidental overdose of cough medication (that's just a running theory, by the way). Dave Raymond, the man who lived inside the body of the hollowed out shell of the giant bird-like creature from a fictional island in the Pacific (wait, the Galapagos Islands is a real place???), was told to have "G-rated fun," by team officials.

That meant no keggers on the field. Sorry, Dave.

Here's how the Phanatic looked in '78. 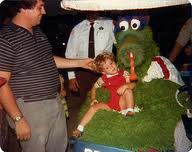 As you can see by the sheer terror on the eyes of the little girl in the original Phanatic's lap, his look early-on was a bit rougher around the edges. 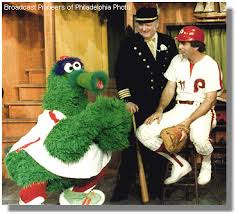 However, as time went by, Raymond made the Phanatic the most entertaining mascot, nay, fictional character, in United States sports history.

San Diego, you can have your chicken.

Now, the Phanatic has been streamlined, and entombs a new human inside him, Tom Burgoyne, who took over in 1993 for Raymond, who was likely kicking himself in the crotch repeatedly for ceasing to live inside the giant bird-beast just in time for the Phils' magical run to the World Series.

Of course, the Phanatic has had to go through some tough times. It's not easy being the most-sued mascot in America. Yet, for Phils fans sentenced to many years of horrific baseball and dankness of the Vet, the Phanatic was one of the only reasons to bring your kids to the ballpark.

So, as we celebrate 36 years of the Phillie Phanatic, let's take a look at some of the more memorable moments that YouTube has of the greatest fictional character in American history.

My only goal in life is to see the Phanatic mock Brian Wilson. Has this happened yet and I've missed it?

Lady Gaga. One of the best.

Of course, there are a million more bits the Phanatic has done that are better than some of these, but the glory of YouTube goes only so far.