Jimmy Rollins is about to become 3rd most prolific in Phils history in reaching base, and Ryan Howard looks to pass Chuck Klein for 4th most RBIs on the team's all-time list.

The intent of these Stat Notes posts is to show key metrics for how the Phillies are doing this year in ways that aren't easily found elsewhere.

We start with an NL-wide view of standings and key team stats, move to the Phillies and their current opponent, and finish with individual stats and any upcoming milestones or other tidbits.

- NL Standings and team stats
- Phillies Team Stats vs. 2013 and vs. the Diamondbacks
- Individual Stats: Hitters and Pitchers
- Upcoming Milestones

The Phils are back in front of Miami, although their pythagorean projection based on run differential is still much worse than the Marlins'. 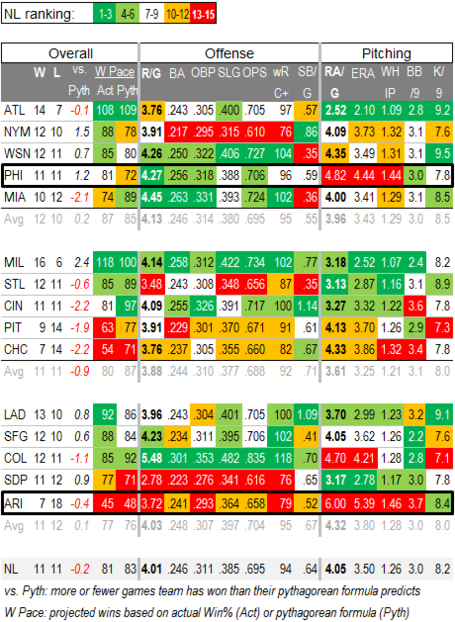 Phillies Team Stats vs. 2013, and vs. the Diamondbacks

The Phils have moved up to 3rd in the NL in scoring, even though none of the underlying stats are ranked that high. In fact most other stats are meandering around the middle of the pack.

Arizona is near the bottom in most offensive stats, despite their very hitter-friendly home park. 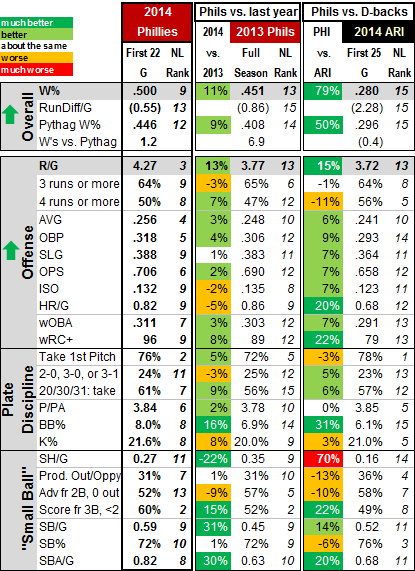 These are possibly the two worst pitching staffs in the NL so far this year. 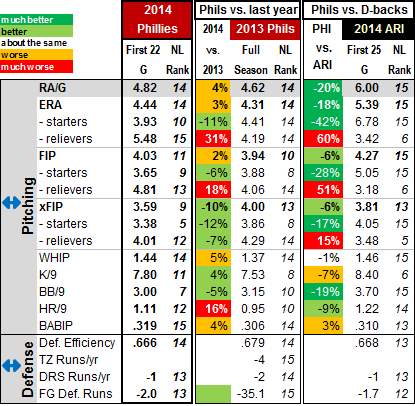 The core four are still anchoring the top of the OPS rankings. Utley has cooled off, but Ruiz has gotten hot lately. Outfielders Byrd, Brown, and Revere have shown occasional signs of life, but have struggled to put together any sustained success. 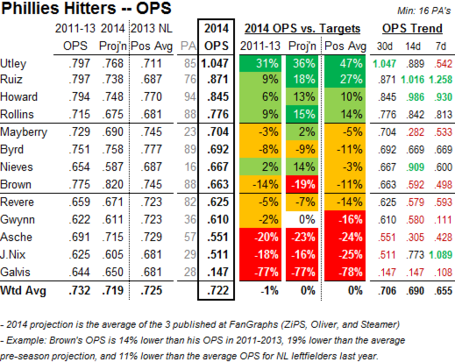 Below are two tables. The first compares 2013 and 2014 for each starter's games, innings, and ERA, along with the two fielding-independent ERA estimators, xFIP and FIP, as well as an "Unearned Run Average". Also shown are the stats of the bullpen, in aggregate.

So, for example, we see that xFIP (which is based on the two things pitchers can most clearly control, walks and strikeouts, while assuming a league-average HR/FB% rate) is better than last year across the board, and in many cases substantially better.

FIP (which is based on the walks, Ks, AND the home runs a pitcher actually allowed) isn't far off from last year's with Lee and Hamels being much better so far, and Burnett much better than Halladay, but Kendrick and Pettibone worse.

Numbers that are at least a half run different from last year are highlighted. 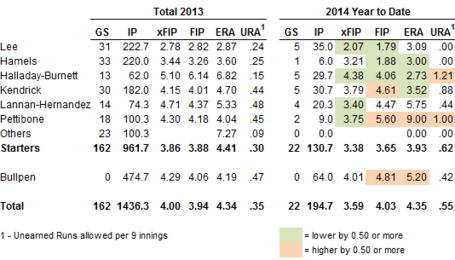 The second  table takes the year-to-year changes in xFIP, FIP, and ERA, and translates them into the number of additional (or fewer) runs allowed by category.

For example, any difference in xFIP can be translated into a number of runs better or worse from issuing walks and striking out hitters (there's also some due to the difference in fly balls allowed).

From the difference in FIP we can deduce the change in runs allowed due to walks, Ks, and HRs, and since walks and Ks are already accounted for by xFIP, anything left over must be from HRs.

"Other" includes all earned runs not accounted for by walks, Ks, and HRs, so it's the change in other hits, or sequencing of hits.

And finally the change in unearned runs is also broken out. (Note, breaking out UER vs. Other this way assumes that none of the unearned runs are explained by FIP, and I'm not sure that's right, but that's something to be aware of).

Example: Lee is striking out more and walking fewer than last year, and the resulting improvement in his xFIP means he has allowed 3 fewer runs than he would have allowed with last year's rates. Likewise, his HR/FB% is lower, and that's reflected in an FIP that's even lower than the improved BB and K rates would explain. However his ERA is slightly higher than last year, so other hits, fielding, and timing of those hits have cost him five additional runs.

The two things that jump out are 1) the improvement from Roy Halladay to A.J. Burnett so far, and 2) the bullpen's issues with home runs, even compared to a rough 2013. 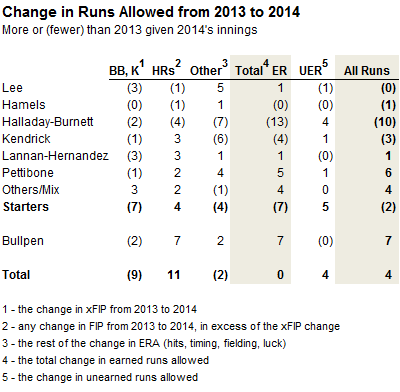 Jimmy Rollins- Rollins needs three  more walks (11 total) to become the 6th Phillie in history to walk 700 times.
- He needs to get on base 7 more times (by hit, walk, or HBP), to tie Ed Delahanty for 3rd in Phils history in times reaching base, with 2,937.
- Ten more plate appearances (98 total) will make him only the 2nd player in history to record 9,000 with the Phillies, joining Mike Schmidt (10,062).

Chase Utley- With his single yesterday, Utley tied Bobby Abreu for 8th most Total Bases in Phillies history, at 2,491.
- Nine more total bases (57 total) will make Utley the 8th Phillie with 2,500 in their career.
- Thirteen more official At Bats (90 on the year) will put Utley at 5,000 for his career, making him the 14th Phillie to record that many.
- His next sacrifice fly (2nd this year) will tie Greg Luzinski for 3rd on the Phillies list, leaving him behind only Bobby Abreu (54), and Mike Schmidt (108).

Cliff Lee
- Lee needs 2 more strikeouts (40 total this year) to tie Larry Christenson for 11th most in Phillies history, at 781.

Cole Hamels- Hamels' will be going for his 100th career win again on Tuesday. When he finally gets it, it will also put him in a tie for 7th most in Phils history with Al Orth.- He also needs 1 1/3 innings to tie Eppa Rixey for 9th on the Phils list at 1,604.