Why Did It Have to Be Snakes? - Phillies 2, Diamondbacks 0

You know, if they keep this baseball thing going, it might really catch on!

Share All sharing options for: Why Did It Have to Be Snakes? - Phillies 2, Diamondbacks 0

So, this was the first game I've watched in a long time.  There's a reason for this: 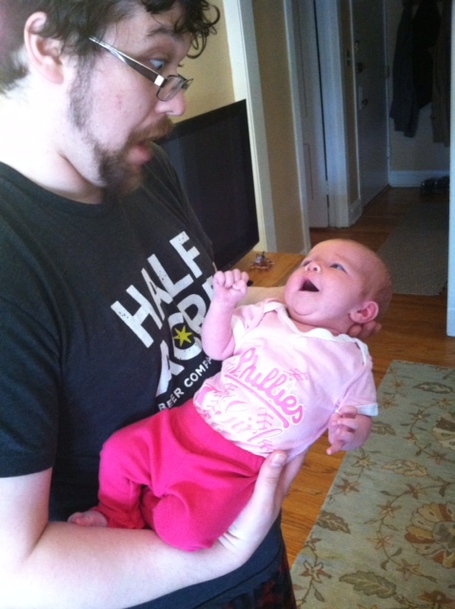 But I'm back! And heck, a good game to come back to at that: AJ Burnett pitched well, the bats came through at opportune times, and the Phillies took the series in Arizona 2-1.  Again, we see that there is nothing that the baseball gods possess that we cannot take away.

The game started quite nicely, as Chase Utley hit a single off D-Backs starter Brandon McCarthy that was half-line drive, half-Texas leaguer and scored Ben Revere for the first run of the game.  Hey, looks like Ben Revere is having himself an okay year! And I'll just check Fangraphs to confirm that and...huh.  Well, maybe he's uh turning it around.  Anyway, Revere was solid throughout this game, with two hits and a stolen base.

That's no small thing today, as McCarthy was on point, with 12 strikeouts, one walk, and two runs allowed: that one by Revere and, shock of all shocks, one by golden god Chase Utley, who was hit in by Marlon Byrd in the sixth inning.  The D-Backs pen, as well, much maligned as it has been, was lockdown, with no runs crossing the plate even after Cy McCarthy left the game.

But what was briefly the Diamondbacks pitching performance is now ours, as AJ Burnett continued his post-hernia dominance, as he pitched eight shut out innings with five hits and no walks.  These were literally the first pitches I've seen Burnett make as a Phillie, and this tweet can demonstrate my gleeful surprise.

And some defensive gaffes by the D-Backs -- particularly Chris Owings throwing to third instead of first when Utley scored his run -- and some solid defensive work by the Phillies -- particularly that lolly gagger Jimmy Rollins! -- kept the actually pretty solid Diamondbacks offense off the board.  Also, poor Miguel Montero basically needs a new left foot after two pitches richocheted off of it. But we can only say sorry so many times and still mean it!

So basically, the first game back was a pitcher's duel that had some timely hitting by the Phillies and a virtuoso performance by the offseason's biggest acquisition.  I know the Phillies aren't gonna win the pennant, probably, but I think maybe they might outrun that boulder.

Fangraph of NO SHORT ROUND below.