An abbreviated post this time focusing primarily on milestones 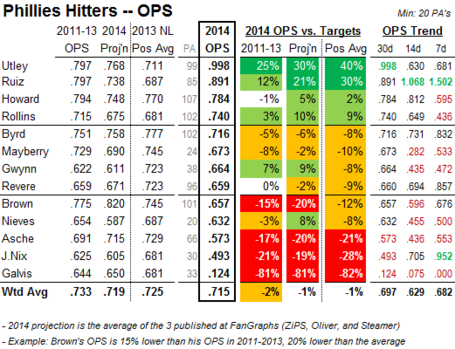 Revere's problem of course, is that his batting average accounts for virtually all of his value as a hitter. The graph below breaks out how much of each hitter's OPS so far this year is explained by 1) batting average, 2) walks/HBPs, and 3) Isolated power: 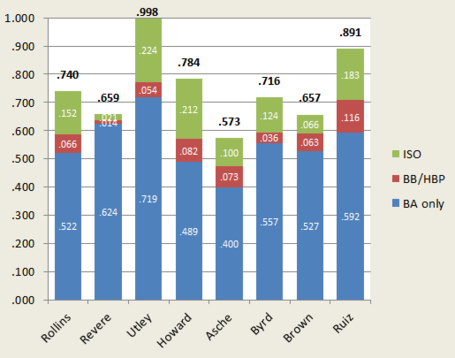 Rollins' next hit will make him the 9th active player with 2,200 or more, as he gets closer to becoming the Phillies' all-time  hits leader:

June 8 is the last day of a road trip, so if he slows down at all he'll more likely pass Schmidt during the June 10-15 home stand: 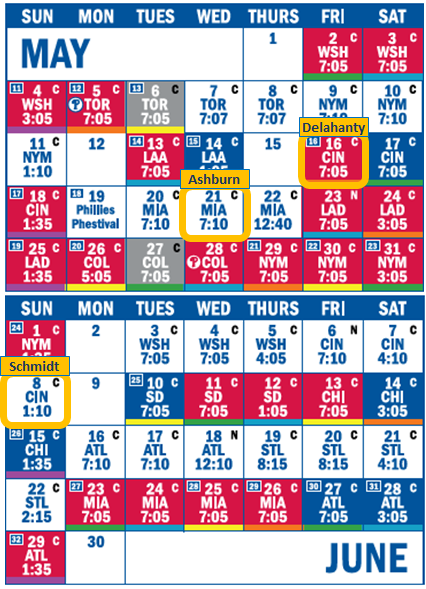 Jimmy Rollins -- Other
- On Saturday, Rollins came to the plate for the 9,000th time in his career, joining Mike Schmidt (10,062) as the only Phillies with 9,000 or more.
- Rollins needs two more walks (11 total) to become the 6th Phillie in history to walk 700 times.- He needs to get on base three more times (by hit, walk, or HBP), to tie Ed Delahanty for 3rd in Phils history in times reaching base, with 2,937.- Rollins' next time caught stealing will tie him with Schmidt for 2nd most on the Phillies list at 92. Larry Bowa holds the team record with 94. Caught stealing stats have been kept since 1951.

Chase Utley- Utley's next official At Bat (90th this year) will make him the 14th Phillie with 5,000 or more.
- Five more total bases (57 total) will make him the 8th Phillie with 2,500 in their career.- His next sacrifice fly (2nd this year) will tie Greg Luzinski for 3rd on the Phillies list, leaving him behind only Bobby Abreu (54), and Mike Schmidt (108). Sac Flies were tracked at various times before, but have only been recorded continuously since 1954.

Cliff Lee- His two strikeouts on Saturday tied him with Larry Christenson for 11th most in Phillies history, at 781.

Cole Hamels- Hamels' will be going for his 100th career win again on Tuesday. When he finally gets it, it will also put him in a tie for 7th most in Phils history with Al Orth.- He also needs 1 1/3 innings to tie Eppa Rixey for 9th on the Phils list at 1,604.