How do the Phillies stack up, position by position, vs. the other NL teams? No surprise, Second Base and Shortstop (as well as Catcher) rank high, while Third Base ranks very low.

Share All sharing options for: Phillies Rankings by Position

When we first checked where Phillies ranked at each position this year, the season was less than two weeks old. Chase Utley had gotten off to a torrid start, and a couple of big hits by John Mayberry Jr were enough to push the Phils' Left Field stats towards the top of the league. Jimmy Rollins on the other hand ranked below average among shortstops by most key measures.

Two and a half weeks later, the first month of the season is almost complete, and below is how the Phillies' stats by position rank against the rest of the National League. We'll look at WAR, and the wOBA and Defensive measure that are two main components, as well as OPS:

It usually doesn't make a big difference except in cases like those of Colorado's Charlie Blackmon, who is primarily a center fielder but has played enough games in RF for his stats to also be included there.

C: After a slow start, Chooch got hot enough to win the NL Player of the Week award for last week, when he became the first Phillie to hit 6+ extra base hits in a single series since Jayson Werth.  He has the 3rd highest wOBA among all catchers in the NL, and the highest of the eight with enough PAs to qualify.

2B: Utley still leads all second basemen in WAR, wOBA, and OPS, although his season to date can be equally divided between red hot and ice cold:

3B: There's nothing that Phillies 3rd basemen aren't last in. And as bad as Asche has hit, Nix has hit even worse. But the really astonishing stat is the -5.3 in total runs vs. average defensively (in a small sample), of which -4.5 are from Asche.

SS: Rollins is looking good so far, both at the plate and in the field. Nix hurts the numbers some at the plate, but helps the defensive ranking.

OF: Pretty weak sauce across the board. 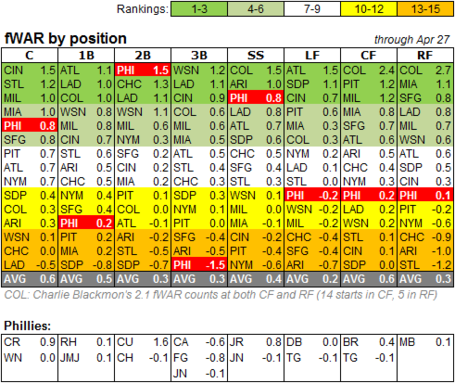 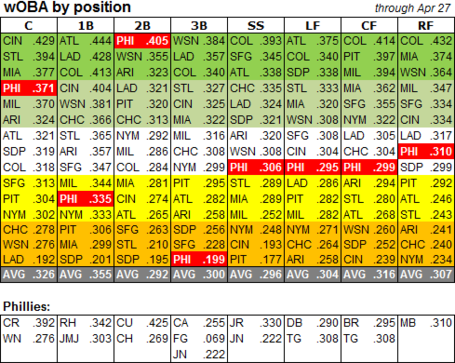 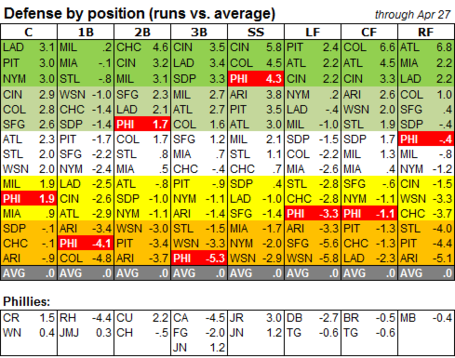 While OPS offers a serviceable approximation of overall hitting effectiveness, wOBA is the preferred hitting stat since it more accurately reflects contributions in generating offense. However the OPS rankings below from baseball-reference.com do have the advantage of eliminating the double-count issue. So for example, of Nix's 30 PAs, whereas Fangraphs counts all 30 at both SS and 3B, bb-ref only counts the 9 that he had while in the game at SS when adding up that position.

There no significant differences from the wOBA rankings, at least this time: 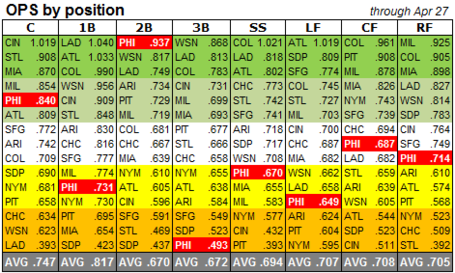 Phillies stats by position from baseball-reference.com - click on a position to see player detail

We'll look at these rankings periodically as the season progresses to track how the Phillies are doing relative to the league at each position.