Sure, 23 games is PLENTY of time to make judgments on the Phillies' brand spanking new broadcast crew. *Sarcasm font ENGAGED*

Over the winter, the Phillies and Comcast Sports Net ushered in a new era of Philadelphia Phillies broadcasting on TV.

Gone was longtime analyst and play-by-play guy Chris Wheeler and the more recently-added Gary Matthews. As part of the team's new cable TV deal with Comcast, the cable giant decided they didn't want "Sarge" and "Wheels" to be part of the broadcast crew any longer.

Analysis: The jury may still be out on Philadelphia’s new broadcast team, and they may have finished lower if the Tom McCarthy/Chris Wheeler/Garry Matthews trio was still calling games this year. We don’t have much of a sample for Stairs, Moyer, and Schmidt (in this incarnation, at least), but I think they’ll end up getting into a nice groove as the season goes on.

"Tom McCarthy is awful in the fake announcer sort of way. He screws up frequently and his big cackle and constant laughter is beyond irritable and very, very distracting." -MattSmith2

Fans simply do not seem to have warmed to the new crew as of yet. 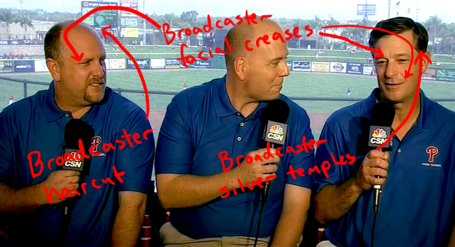 They complained about T-Mac's scmaltzy, overly-broadcasty delivery and his incessant need to fill every second of silence with inane chatter. Moyer was criticized for being, well, boring. And while there weren't a whole lot of specific criticisms of Stairs, it seems as though he's still feeling his way through the broadcast as well.

But when thinking about this crew and their performance so far, consider a few things.

First, McCarthy, Stairs and Moyer have been working together for 23 regular season games. That is nowhere near enough time for a group to generate any kind of on-air chemistry. Sure, there have been times when a pair or group of broadcasters hops on the air together and immediately sound as if they've been together for 20 years. The original Monday Night Football crew of Howard Cosell, Dan Meredith and Frank Gifford were like that. Harry and Whitey were like that.

Sometimes, chemistry can't be forced, no matter how much time you give it. But it is far too soon to say that is the case with this crew. It would be unfair to form any hard judgments or critiques of these guys until at least the start of next year.

Second, Comcast didn't do these guys any favors, chemistry-wise, by having their schedules jump all over the place. I'm sure both Stairs and Moyer were happy when Comcast agreed that each guy would only do 100 games, with some of them overlapping and forming a three-man crew. But when T-Mac is paired with a different analyst every other series, it's terribly difficult to develop any real chemistry.

Chemistry is developed through consistency. It's like an NFL offensive line. If different offensive linemen are being shuttled in and out every other week, there is no way that line is going to be consistently effective.

Third, Tom McCarthy is who he is. He isn't changing. And full disclosure, I don't particularly care for his on-air work, either, at least at calling baseball games (although he is actually quite good at calling NFL games). But it's fair to remember that McCarthy is following on the heels of perhaps the greatest broadcaster in Philadelphia history, Harry Kalas. It's hard to imagine anyone filling that void and being loved by the fans. T-Mac had impossible shoes to fill, and now he's being asked to do a competent broadcast with a different analyst almost every night.

That is a really hard thing to do.

That said, McCarthy would do himself well to dial it back a notch, not feel the need to talk constantly and explain the game to people like they are 12 years old, and let his analysts do some of the heavy lifting.

McCarthy's strengths are that he is actually pretty good at the big home run call and getting excited during "big moments."

See? That's a pretty dang good home run call there. He just needs to understand that not every moment during the game qualifies as a "big moment," and to not get overly excited about routine fly balls to the outfield that he thinks are potential home runs off the bat.

They have a lot of say in what goes on the air, and most of the time, I'm sure they do a decent job. But when the broadcast team falters or sounds like they're stuck in mud, some of that is on the production team, too.

Awful Announcing does this list every year and even they admit it's too soon to say how this broadcast team is going to turn out eventually. All three guys have their strengths and weaknesses and, who knows, they may never get any better. But it's hard to believe that, with a little more time, they won't improve some and, maybe, a lot.

In the meantime, if you don't like what the TV guys are giving you, flip on the radio and pick up Franzke and Larry. They pretty much rule.