Jimmy Rollins, the Hit Record, and other Phillies Milestones

Rollins will become the Phillies' all-time leader in hits in a couple of months, and will be a fixture atop many of the team's lists for many years to come.

Share All sharing options for: Jimmy Rollins, the Hit Record, and other Phillies Milestones

[Milestones for other Phillies will be the subject of a separate article.]

Jimmy Rollins' statement that he wants to stay with the Phillies in order to achieve team records has gotten some flak, but what I hear in that is that the Phillies are the only team he's ever known, and one where he has experienced a lot of success, both personally and as a team, and now that he's so close to achieving something historic with that team, he's not interested in throwing all that away.

The milestone that gets the most attention is the Phillies' all-time hits record. He came into the season needing 59 hits to tie and 60 to surpass and take sole possession of the record currently held by Mike Schmidt, and barring injury he is certain to reach that by June. There has been some speculation that if the Phillies are out of it in July, they may look to trade Rollins, and that once Rollins has the hits record he may be more willing to waive his no trade clause. If Rollins winds up being traded at the deadline, it will be the third time since Ed Delahanty set the record in 1901 that a Phillie got just enough hits to beat the team record before retiring or being traded. The three who are currently ahead of Rollins:

#3) Ed Delahanty (1888-1901), 2,213 (Rollins needs 38 total this year to tie) -- The Hall of Fame outfielder surpassed teammate Sam Thompson for the most hits in the Phillies' short history in 1898, Thompson's last year with the the team. By the time Delahanty finished his Phillies career after the 1901 season (when he jumped to the year-old Washington Senators), he had 2,213 hits, well ahead of Thompson's 1,478. He would remain the Phillies' all-time hits leader for another 58 years.

Assuming Rollins is healthy and only rests occasionally, he will likely pass both Delahanty and Ashburn in May to move into #2, and Schmidt's record will be surpassed in mid-June, possibly at Citizens Bank Park during the June 10-15 homestand.

While the hits record is the milestone that most focus on, Rollins has already achieved a couple of others in the early going:

He made his 14th straight opening-day start for the Philadelphia Phillies, which matched Cal Ripken's major league record for the most consecutive seasons starting at shortstop for the same franchise. In doing so Rollins also broke the NL record that he shared with Dave Concepcion of the great 1970s Reds teams. Larry Bowa started 12 openers in a row at shortstop for the Phils.

Mike Schmidt holds the Phillies record for consecutive starts on opening day with 16 (1974-89).

Rollins hit his 200th home run in dramatic fashion on Opening Day, with a grand slam that put the Phillies up 6-0 against the Rangers. For a team that faced so much doubt and so many question marks coming out of Spring Training, particularly about their offense, it was an exciting way to start the season.

Reaching the 200 plateau in home runs put Rollins in some very exclusive company:

Implications for Hall of Fame chances

With all of these gaudy counting stats, at the shortstop position no less, does that mean he has a strong shot at making the Hall of Fame? I won't go into detail on that here, but as I wrote a year ago, I think chances are that he will fall short, particularly if advanced stats continue to gain acceptance among Hall voters as expected, and gain prominence at the expense of counting stats.

In addition to those covered already, if he's healthy and playing close to 2013 levels, he will reach these rankings on Phillies' all-time lists:

- 1st in At Bats: probably shortly before he sets the team hits record, Rollins will also pass Schmidt for the most At Bats in team history
- 3rd most singles in team history, passing Larry Bowa
- 9th most HRs, passing Dick Allen
- 7th in RBIs
- 6th most walks
- 3rd most times on base, passing Delahanty
- 4th most strikeouts
- 1st in caught stealing, passing Bowa for that as well
[CS stats have only been kept since 1951; at 82.7%, Rollins has the 26th highest SB% since then. Of the 145 players with 300+ attempts since 1951, Rollins has the 8th highest SB% (Pete Rose has the 145th).]

Below are the milestones Rollins is expected to reach in 2014, with approximate timing. 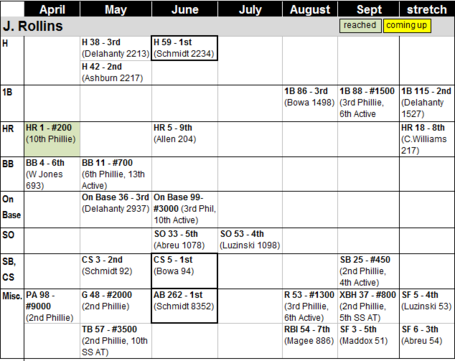 If Rollins isn't traded before the end of 2015, and assuming his option vests for next year, he will move up on a couple of more lists, including likely becoming the Phils' all-time leader in plate appearances. He also has a good shot to pass Ed Delahanty for 2nd most runs scored, and also for 2nd most singles. 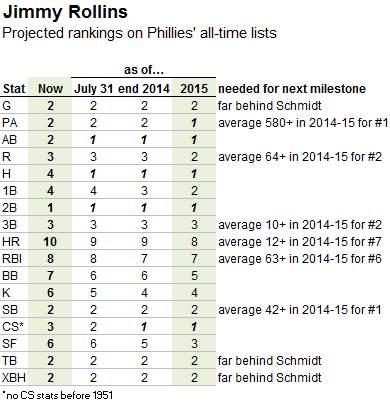 So, again, if he stays healthy and in Philadelphia through the end of 2015, he will likely finish either 1st or 2nd in Phillies history in Games, Plate Appearances, At Bats, Runs, Hits, Singles, Doubles, Extra Base Hits, Total Bases, Stolen Bases, and Caught Stealing.

He'll be a fixture atop those lists for many years to come.