Milestones likely to be reached by Phillies in 2014, as well as all-time Phillies top ten lists for key stats.

With his hot start (MLB's highest fWAR and 2nd highest wRC+ in the first week of the season), Chase Utley has already reached several milestones in the early going, and assuming he stays healthy it figures to be a busy year for him in that regard:

In addition, he has already moved up to 18th on MLB's all-time list for times Hit By Pitch, and may make it to 17th by the end of the year. After averaging 18 per year in 2005-12, Utley only got in the way of 5 pitches in 2013. It would be understandable if that were a conscious effort to avoid injury, but the way he stuck his knee at that pitch on Sunday may indicate that he's still willing to tolerate some pain in order to get on base.

Below are the milestones he will likely reach in 2014, assuming he remains healthy and plays at roughly last year's level.

How to read
- # needed in 2014, e.g. Utley's 3rd RBI of the year tied him with Luzinski for 11th on the Phils' all-time list, at 811.
- Rankings refer to the Phillies' career lists, unless specified as All-time ("AT"); non-Phillies milestones are in blue.
(click table for a sharper image) 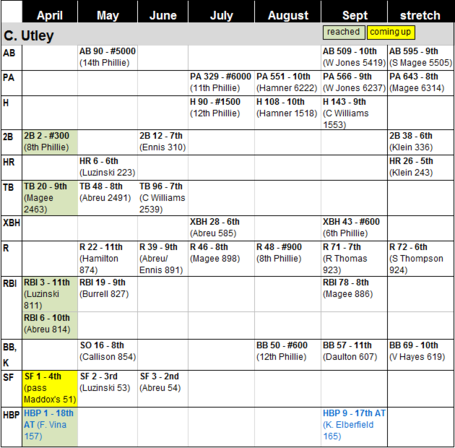 Howard should pass Chuck Klein some time in May for 4th most RBIs in Phillies history (with only Mike Schmidt, Ed Delahanty, and Del Ennis still ahead of him). Not long after that he will likely also get the 1,000th RBI of his career.

By the end of the year he could be 8th on the Phillies list in walks, 8th in total bases, and 7th in extra base hits.

Ben Revere: his stolen base in the 5th inning on Sunday was his fourth of the young season, and the 100th of his career. Of course at this rate, #150 or even 200 may also be within reach, since Revere is on 108-steal pace after 6 games.

Hamels' first win of the year will be the 100th of his career, and will tie him for 7th on the Phillies list. His second win will tie Curt Schilling for 6th.

He will likely also pass both Schilling and Chris Short in strikeouts, leaving only Steve Carlton (3,031) and Robin Roberts (1,871) ahead of him.

Despite his late start, assuming no further health issues, by the end of the year he will also be 5th in games started, and 6th in innings pitched.

Burnett is close to becoming only the second active pitcher with 1,000 walks issued, behind only Ryan Dempster. And while Dempster isn't officially retired, he is sitting out the 2014 season (citing health issues) so Burnett can reasonably be called the active leader in that category.

Lee is moving up some Phillies lists, and may crack the top 10 in strikeouts this year (needing an ambitious 229 to tie Randy Wolf). Larry Christenson at number 11 is only a few starts away.

Who knows how effective Papelbon will be this year and whether any of the items shown for him below are attainable. But if he continues to close for the Phillies, he will likely get some saves in addition to the ones he blows, and may reach some milestones on the MLB all-time saves list, as well as the Phillies career list:

- Save number 14 will be the 300th of his career, and will tie him with Jason Isringhausen and Bruce Sutter for 24th most all-time.
- He is already 8th on the Phillies' list, and 11 more will tie him for 7th with Ricky Bottalico.
- Again, depending on a) how many opportunities he gets, and b) how many he can convert, he could reach Tug McGraw (#6 at 94), or even Brad Lidge (#5 at 100) on the Phillies' all-time list. 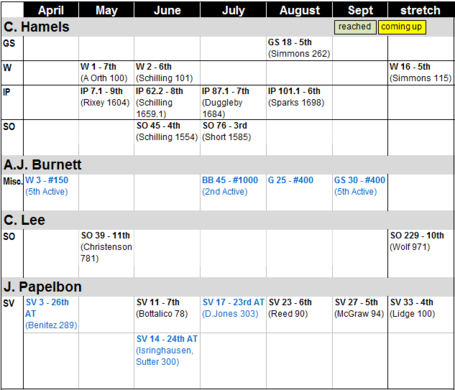 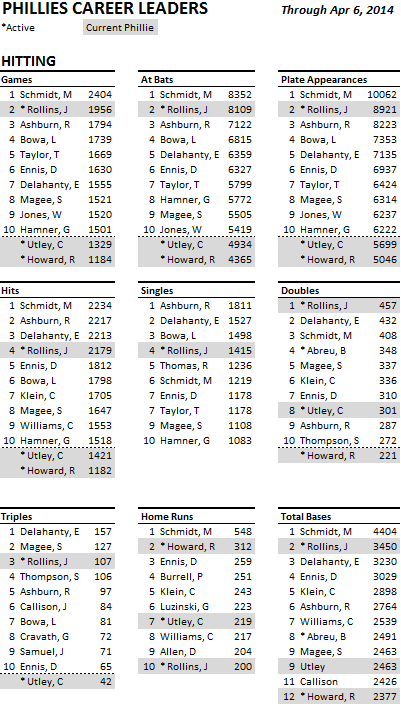 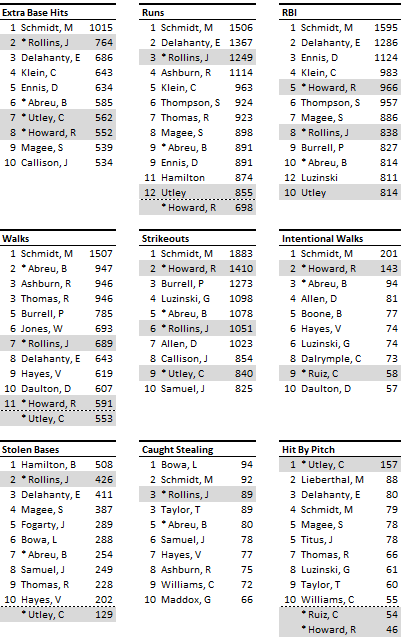 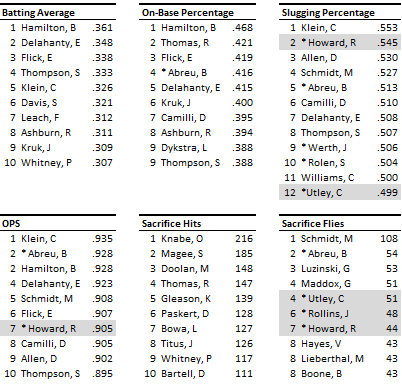 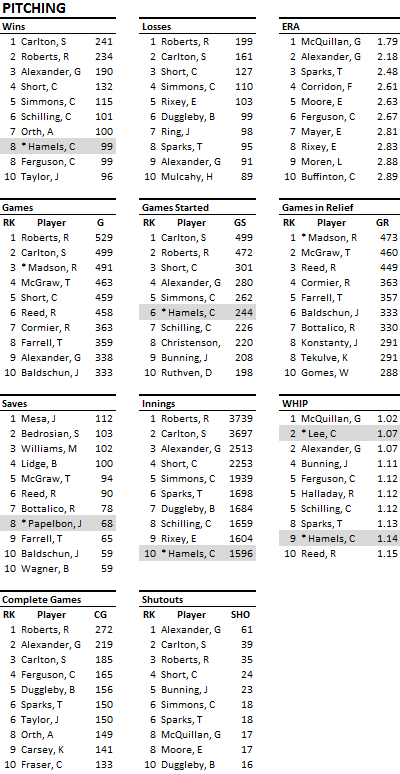 Source: baseball-reference.com for managing stats, mlb.com for everything else.