How To Properly Woo Mike Trout to Philadelphia

Sure he can't be a free agent until 2021, but it never hurts to start laying the groundwork early.

Share All sharing options for: How To Properly Woo Mike Trout to Philadelphia

The hometown boy returns this week.

That's right. Mike Trout, the greatest player in baseball, the man who grew up rooting for the Phils all of his life, will be in town to play a two-game series at Citizens Bank Park starting tonight. But in a subtle kick to the pants from the baseball angels, the Millville, NJ native's return to Philadelphia is just a scant two games.

Why just two games? Because Major League Baseball is a great big meany head to Phillies fans, that's why.

And oh yeah, his L.A. Angels teammates will probably be here doing baseball things too.

Now, obviously, we don't want Trout destroying Phillies pitching at quite the same rate he usually destroys American League pitching. It'd be nice for the Phillies to win these two games here, although that will be a tough task. The Angels are having a decent bounceback season so far in 2014, in third place in the AL West at 19-18. Their +28 run differential is third-best in the AL, indicating they've played a bit better than their record would say.

But it is Michael Nelson Trout the people will come to see tonight and tomorrow. And because a Trout-to-Philadelphia visit is about as rare as a Hale-Bopp comet sighting or a Ben Revere walk, the Phillies should not miss this opportunity to woo him back home in time for his free agency, which is just six short years away.

Involving the entire town of Millville is a very good start.

The entire town of Millville, NJ will be at Citizens Bank Park tomorrow. I wonder why? pic.twitter.com/1H2yQVOo5Z

But here are five more things the Phils and their fans could do to get the ball rolling.

1. NEVER EVER BOO HIM

Seriously, even if he hits a grand slam in the top of the 9th when the Angels are trailing 4-1 and he makes 15 fantastic diving plays in the outfield, never boo him. Yes, this is the one man for whom it's OK to rip out your souls and make you eat it. You will enjoy this Mike Trout visit, and he will know that you enjoyed it, and he will want to come back for more of the GREATEST FANS THE WORLD HAS EVER KNOWN when his contract is up.

Don't make him hate his hometown. Make him wish he was back full-time.

@FelskeFiles I wonder how subtly they could pull off a Mike Trout bobblehead night with him wearing an ambiguous red uniform.

This was a fantastic idea suggested by our own Justin Klugh yesterday on Twitter. I mean, bobbleheads NEVER look like the person they're supposed to portray. You could probably find a bunch of those old Hunter Pence bobbleheads lying around the catacombs of Citizens Bank Park somewhere, get some model paint, and get the interns on the job.

This would work, right? 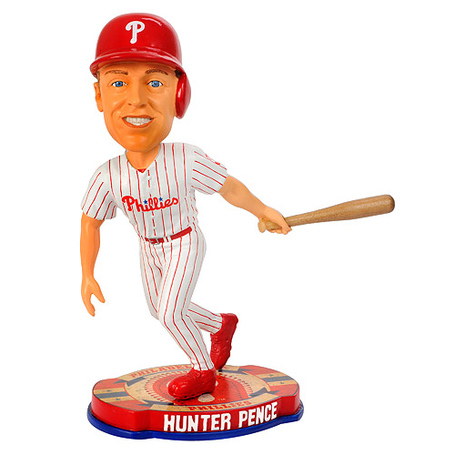 What player wouldn't be influenced by 40,000 fans in the stands wearing Mike Trout Phillies shirseys? Why have these not been created yet? Copyright violations you say? Listen, you do the crime, get the cease and desist order, then stop. It's the way the world works. In the meantime, Mike Trout realizes that everyone in the stands is wearing a Phils shirsey with his name on it. He think to himself, "Dang, I like the way that looks." The nugget is then implanted in his mind, ruminating, rolling around, for the next six years.

Plus, how awesome would it be to own a Mike Trout Phils shirsey? These must be created, post haste.

Or something. Listen, a player doesn't have to be retiring from the game, like Derek Jeter and Mariano Rivera before him, in order to show that opposing player a little love. Do you really think Mike would turn down a free pony? Or something other than a pony. It could be anything. A huge stereo. A 99-inch TV. Fifteen, 99-inch TVs.

LET'S JUST GIVE HIM COMCAST. ALL OF THE COMCAST.

That's a good start, anyway. Would the Angels be mad? Would they think this is some kind of tampering? Yeah, probably. Guess how much I care?

I mean, who doesn't want 15 minutes of uninterrupted Chase Utley time? Pretty much anyone would play here if they were guaranteed to have 15 solid minutes of face-to-face special quiet time with The Man.

These are just a few ideas. I'm sure there are better ones, more creative ones. These are just a starting point, but they're important, because time is of the essence. We have just two short days to convince Michael that he should be playing baseball in his home town when the time comes.

The good news is that, in his heart of hearts, Mike Trout WANTS to be here. Remember his reaction to the Roy Halladay trade before the 2010 season? His heart is still here. He wants to be with us. So don't do anything to change his mind.

And oh yeah, to the front office. When and if the time comes, just give him half a billion dollars. For a jillion years.

It'll be worth it.