Chase Utley Taking One for the Team Again

After a brief dip last year in the times he got hit by a pitch, Utley seems to be back to his old habits of getting in the way of a pitch if it means getting on base.

Share All sharing options for: Chase Utley Taking One for the Team Again

Chase Utley has gotten hit by pitches a whole lot in his career, ranking 18th on the all-time list for most HBPs, with 161 and counting. He's accumulated those without any all-time high seasons -- his career high of 27 is tied for the 25th highest single season total.

Utley passed Mike Lieberthal's 88 many years ago to become the Phillies' all-time leader in plunks.

But last year something funny happened, and he was hit a relatively normal number of times, just 5 in 531 plate appearances, or about the average MLB rate.

Well, whether that was a temporary decision to try to avoid injury, or just a fluke, it seems to have passed.  He has already been hit 5 times in 153 PAs so far this year, and his HBPs as percentage of plate appearances are back to the rate they had been at in 2009-2012: 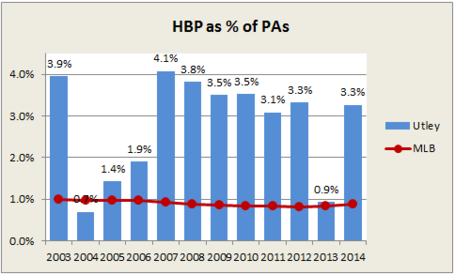 Those extra HBPs have certainly contributed to his value as a hitter, bumping up his already respectable On Base Percentage. But how much have they actually added to his OBP?

It's not the full 30-40 points that the HBP% alone might imply, because if those plate appearances hadn't ended in HBPs, they presumably wouldn't have all been outs, but would have looked like the rest of Utley's at bats and resulted in a .356 or so BABIP OBP. This would imply that about .018 of his .374 career OBP is from HBPs.

But every batter gets hit occasionally. If we are looking for how much OBP Utley's particular propensity for getting hit has added, we would want to look at his HBPs relative to the league average, and looking at it this way, they account for about .012 of his career .374 OBP: 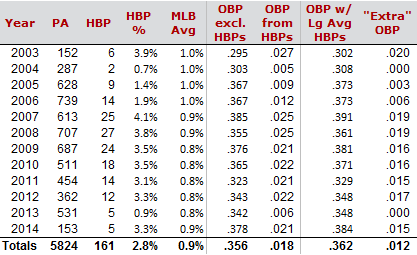 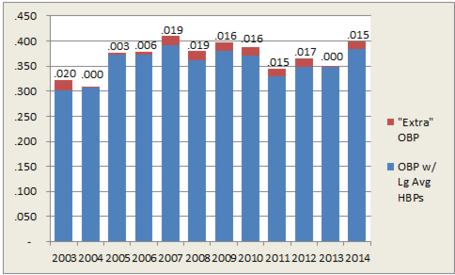 Finally, looking at his splits, relative to his career 2.8% HBP rate:

And his HBPs seem to come more often at key times...