For Your Enjoyment: Phillies 8, Reds 3

For the second straight day, the Phillies score some runs to back up a lefty ace and pick up a win at home.

Share All sharing options for: For Your Enjoyment: Phillies 8, Reds 3

It's been tough for me to enjoy the Phillies these last two years. However much I love the old heroes and enjoy that they're actually playing well--however strong the 36-year pull of the laundry on my loyalties--I can't get over the nauseating context of record payroll and sub-mediocre results. It's probably a bit like trying to enjoy an art museum where the thermostat is always set at 90 degrees and the ventilation system blows in the smell of month-old milk and used diapers.

But even when the larger story is a sour one, the game can be beautiful when it's a lovely spring day and your guys are smacking the ball around the yard. So it was Saturday night when Cole Hamels cruised to his 100th career victory and Domonic Brown and Cody Asche powered a 12-run outburst, and so it was again Sunday afternoon as Cliff Lee notched his first win in almost a month and the lineup supported him with four homers.

Things didn't start out particularly well, as Lee surrendered two first-inning runs on a bunt single, a walk, a steal of third, a botched run-down that moved the trail runner to second, an RBI groundout and the first of four hits on the day by insanely hot Devin Mesoraco. But it took the Phillies just two batters to even things up, as Jimmy Rollins and Wil Nieves started the game with solo homers off Reds starter Tony Cingrani. It was just the fifth time in franchise history that the first two Phils batters homered to start a game, and the first since Rollins and Placido Polanco did it in 2004 (h/t Todd Zolecki).

The game stayed tied at 2 until the fifth inning, as Lee settled down after his rough first and the Phils ran themselves out of potential threats in the third and fourth. Lee led off the fifth with a single, beat the throw to second when Rollins hit a hot shot to third that Todd Frazier briefly mishandled, advanced to third on a Nieves sac bunt and scored on Chase Utley's groundout to put the Phils up 3-2. An inning later, Marlon Byrd led off with a solo homer to stretch the lead to 4-2. Lee departed with two out and two on in the seventh, and Mike Adams ended the threat by inducing Frazier to fly out.

The Phils plated four runs in the seventh, all with two outs, to put the game away. Rollins walked to lead off, but was still there after Nieves and Utley struck out. Facing lefty Manny Parra, Ryan Howard went down 0-2, then battled back to work his second walk of the day. Byrd followed with a single up the middle to score Rollins, and Asche lined a three-run homer to make it 8-2. Asche finished the series 7-12 with a walk, two doubles, a homer and six RBI, bringing his season line to .259/.344/.444.

Fangraph of Baseball: More Fun When Your Team Scores: 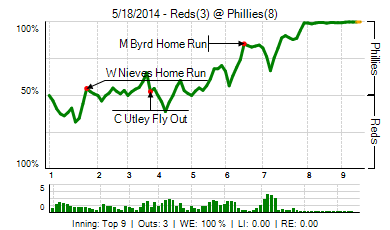