Phillies Rankings by Position at the One Quarter Mark

With 41 games behind them, the Phillies have completed 1/4 of the season. Where do they rank at each of the 8 positions on the field?

Share All sharing options for: Phillies Rankings by Position at the One Quarter Mark

How do the Phillies measure up with the rest of the National League, position by position? We will look at WAR from Fangraphs for an overall measure, as well as hitting and fielding measures that are its main components. We'll also take a look at OPS by position using the position splits at baseball-reference.com:

It usually doesn't make a big difference except in cases like those of Colorado's Charlie Blackmon, who has split time between Center and Left, and so all of his stats get counted at both.

Without further ado, how the Phils look by position:

C: Phils catchers rank near the top in wOBA, and are solidly above average in combined fWAR. Defensively however they are surprisingly low, with the 3rd lowest runs vs. average in the NL.

1B: When the defense ranks a little better than the hitting, you know the hitting isn't where it needs to be.

2B: Highest in the NL in both wOBA and WAR. Utley's defense is about average, but the total is brought down by Nix's -0.6.

3B: If only Asche's stats counted here, wOBA would be second best in the NL, behind only Washington (although WAR would still be near the bottom). Defensively, thanks in large part to Asche's -7.4, the -8.6 runs at the position is one of the worst by any team at any one spot.

SS: Similar to 3B, if only Rollins counted here, the Phils would have the 2nd highest WAR, and 3rd highest wOBA.

OF: Between LF and CF, the most impressive number so far has been, surprisingly, Dom Brown's defense. Marlon Byrd has been unspectacular but solid both offensively and defensively in RF. 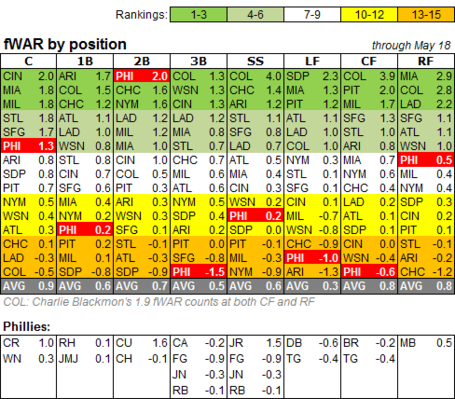 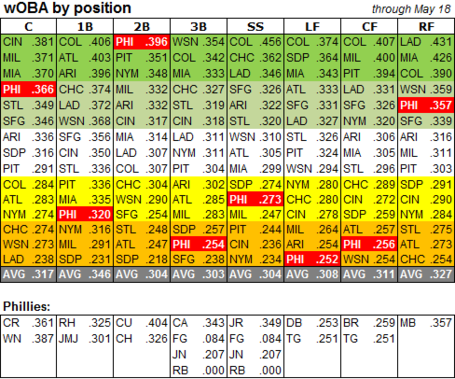 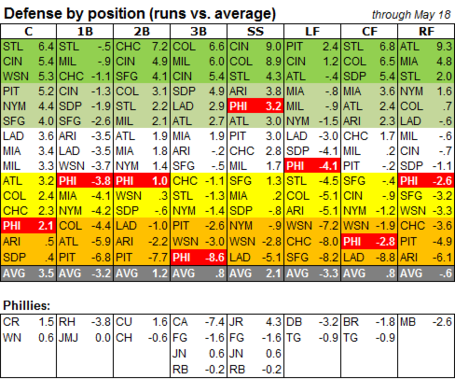 This is based on the position splits at baseball-reference.com. While OPS isn't as accurate a hitting stat as wOBA, the way bb-ref does the splits it at least eliminates the double counting issue by only using a player's stats for a given position when they were in the game at that position.
That accounts for the only real differences between the OPS table and the wOBA table above, which is that 3B and SS both rank somewhat higher when each is only burdened with a portion (instead of all) of the backup infielders' ineptitude: 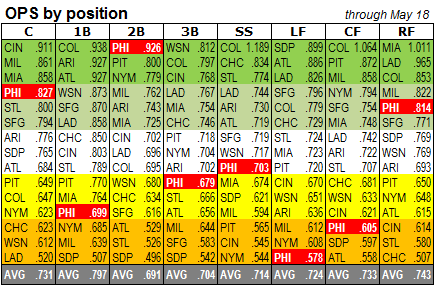