How does each hitter contribute? Particularly interesting for the amazing Ben Revere, who is just one of many Phils no longer walking.

The intent of the Stat Notes posts is to show how the Phillies are doing in ways that aren't easily found elsewhere.

Every team in the NL East is at .500 or better, and the Phils are in last place but only 3.5 games behind Atlanta.

The NL East has been the best division in the NL thus far.

Also, in interleague play, the NL holds a 24-17 advantage (.585 W%) through the first month. After gradually closing the gap with the AL in recent years, this may finally be the season the NL comes out on top. 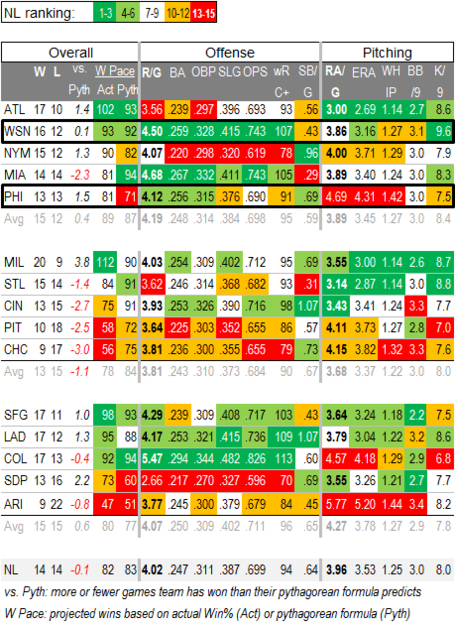 Phillies Team Stats vs. 2013, and vs. the Nationals

After a promising start, the Phillies' walk rate has plummeted:

Scoring has suffered accordingly, although maybe not as much as one would have thought, so there may be some timing luck keeping the recent stretch from being even worse:

So who is walking less? Almost everyone. Chooch is down slightly, but still walking at a high rate: 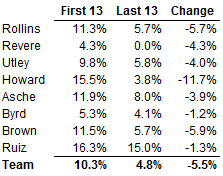 The Nationals are near the top of the NL in most offensive categories: 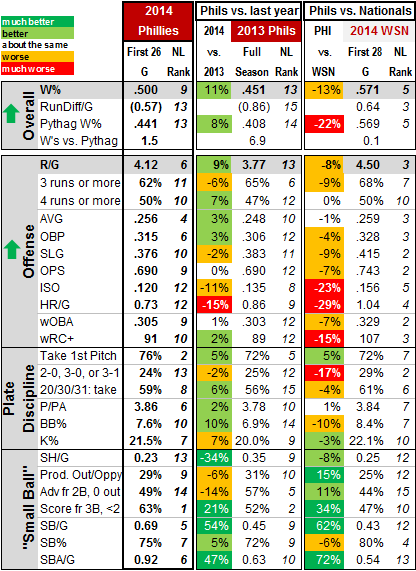 Based on the advanced stats, there may actually be a team that fields worse than the Phillies... 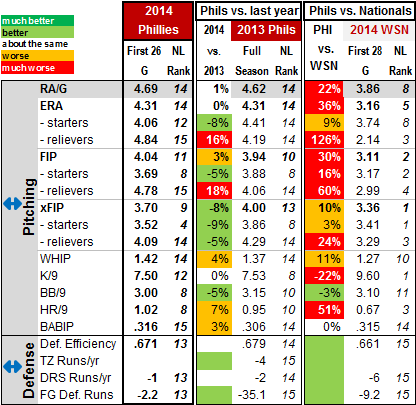 While Utley has cooled off considerably (.582 OPS over the last two weeks), Ruiz and (lately) Byrd and have picked up the slack: 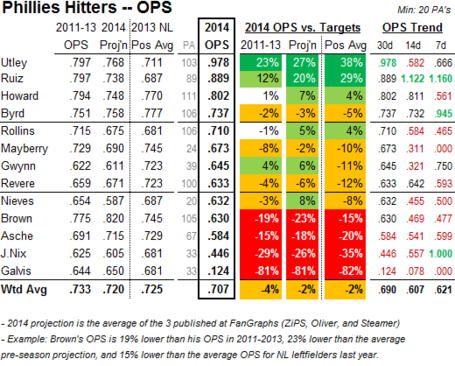 The previous Stat Notes included a breakdown of each player's OPS, showing how much is explained by 1) a player's batting average, 2) their walks (and HBPs), and finally 3) their isolated power (i.e. the difference between slugging percentage and batting average).

Below is the same thing, but instead of OPS, this breaks down the more accurate and comprehensive hitting stat wOBA: 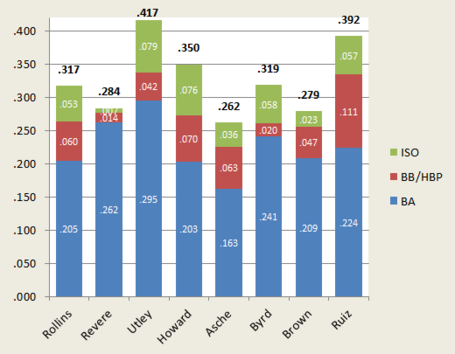 Compared to the OPS graph, breaking out wOBA this way puts more weight on walks, but in the case of Ben Revere, for example, that is still a tiny portion of his hitting contribution.

Revere at the moment owns these distinctions:

xFIP (which is based on the two things pitchers can most clearly control, walks and strikeouts, while assuming a league-average HR/FB% rate) is about the same as last year across the board.

FIP (which is based on the walks, Ks, AND the home runs a pitcher actually allowed) isn't far off from last year's with Lee and Burnett better than Lee and Halladay last year, but Kendrick and Pettibone worse.

Numbers that are at least a half run different from last year are highlighted: 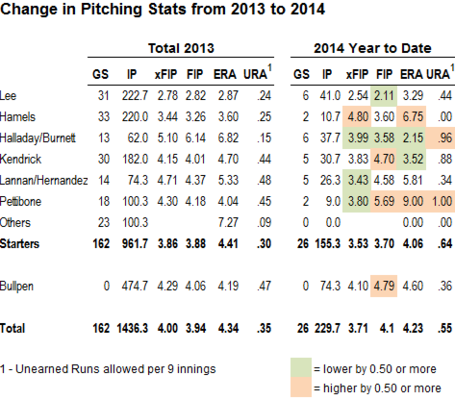 Rollins' next hit will make him the 9th active player with 2,200 or more, as he gets closer to becoming the Phillies' all-time  hits leader:

At the moment he is projected to pass all three during home stands, but those projected dates will move around depending on how he does in the coming weeks. 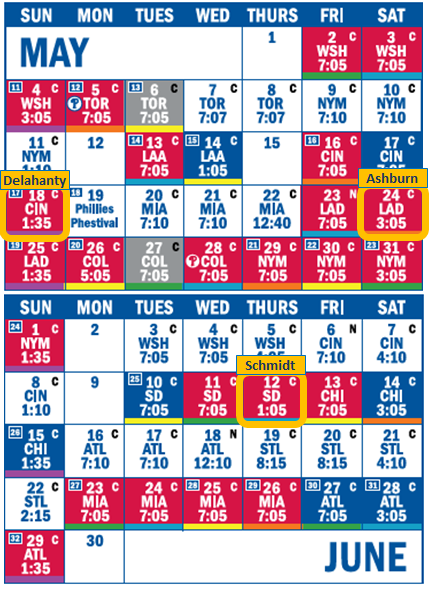 Jimmy Rollins -- Other- Rollins needs two more walks (11 total) to become the 6th Phillie in history to walk 700 times.- He needs to get on base three more times (by hit, walk, or HBP), to tie Ed Delahanty for 3rd most times reaching base in Phils history, with 2,937.- Rollins' next time caught stealing will tie him with Schmidt for 2nd most on the Phillies list at 92. Larry Bowa holds the team record with 94. Caught stealing stats have been kept since 1951.

Chase Utley- Utley recorded his 5,000th official At Bat in Tuesday's game against the Mets, becoming the 14th player to reach that number with the Phillies.- Four more total bases (57 total) will make him the 8th Phillie with 2,500 in their career.
- He needs five RBIs (19 on the year) to tie Pat Burrell for 9th in team history, at 827.- His next sacrifice fly (2nd this year) will tie Greg Luzinski for 3rd on the Phillies list, leaving him behind only Bobby Abreu (54), and Mike Schmidt (108). Sac Flies were tracked at various times before, but have only been recorded continuously since 1954.

Cole Hamels
- On Tuesday Hamels passed Eppa Rixey of the 1915 World Series team for 9th most innings pitched in team history, with 1607 1/3. Next on the list is Curt Schilling, 52 innings away. There are now only three left handers who have pitched more innings for the Phillies than Hamels has: Curt Simmons (1939 2/3), Chris Short (2253), and Steve Carlton (3697 1/3).
- Hamels will go for his 100th career win again on Sunday. When he finally gets it, it will also put him in a tie for 7th most in Phils history with Al Orth.