The Braves are working hard on their reputation as the whiniest group of babies in Major League Baseball.

It's hard to imagine the Atlanta Braves could become even more intolerable after the departure of Brian McCann but, dang it, they're giving it the 'ol college try.

@Ms_Mambo @FelskeFiles the braves are the perfect example of why I hate baseball. And I grew up a braves fan.

After getting swept in Miami by the Marlins this week, Braves players and manager Fredi Gonzalez openly speculated whether Miami was stealing their signs. I mean, what else could possibly explain the Marlins teeing off on Atlanta starter Aaron Harang and his career ERA of 4.26?

"If you would have taken a look at our dugout at one point in the game, it was like the fourth or fifth inning, they were hitting balls everywhere, we got three guys looking at the scoreboard," Gonzalez said after the game. "You got two guys looking at their bullpen. I'm calling (bullpen coach) Eddie (Perez), ‘Eddie do you see anything?' I'm looking at Gattis, thinking he's maybe tipping his pitches. Carlos (Tosca) is looking in the bench over there, maybe somebody is whistling or something."

The story, from Carroll Rogers of the Atlanta Journal Constitution, featured quotes from Harang as well, who couldn't seem to grasp the concept of "reverting to the mean."

What really confused the Braves was how, just last week in Atlanta, Harang was able to strike out 10 Marlins and give up just one earned run in six innings of work, while last night in Miami, he lasted only 4 2/3 innings and gave up nine earned runs on 10 hits to virtually the same lineup. Atlanta also couldn't figure out how starter Alex Wood, who struck out 11 Miami batters in eight innings of one-run baseball last week, got pounded for seven earned runs and 10 hits in five innings on Tuesday.

Because, as we all know, pitchers have never followed up good games against a certain team with bad ones. The team that got shut down the week before never uses video, analyzes their approach, figures out what they did wrong, and makes adjustments.

@FelskeFiles I accuse Harang of cheating for pitching so well to begin the season.

No, none of those things ever happens. Besides, these are the BRAVES. They don't LOSE games to the MARLINS. If the Marlins beat them, THEY MUST BE CHEATING.

But what makes Atlanta's whining even more fun is that they decided to throw the Phillies into the mix as well, recounting that time a Phils' bullpen coach was caught with binoculars in the outfield.

"Yeah, you have this conspiracy theory, but at the end, we came up with nothing," Gonzalez said. "It wasn't like we saw a guy with the (binoculars), like Mick Billmeyer (former Phillies bullpen coach) in Colorado. At the end of the day, they didn't miss the pitches. They were right there."

There has never been any proof that the Phillies were cheating during the years leading up to May of 2010. But it's nice to see Gonzalez is one who believes the Phils were creating an unfair advantage during that time, even though there isn't a shred of evidence that was the case. 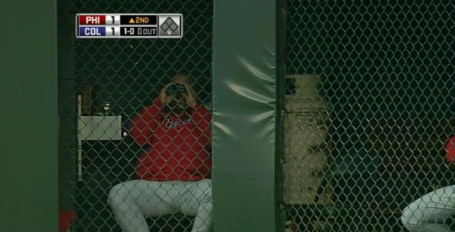 Given the resurgence of the Phils' veteran hitters so far this year, maybe someone ought to search the bullpen crew for binoculars and telegraph machines and stuff.

At the end of the day, Atlanta couldn't find any proof Miami hitters were stealing signs, and in fact, it's entirely possible it was Harang and Wood who were tipping their pitches.

Perhaps it was the Braves who cheated against THEMSELVES.

For shame, Atlanta. For shame.

The only thing that's clear is, even with the arbiter of all that's good and holy in baseball, Brian McCann, no longer on the team, the Braves are still an intolerable bunch.

The Braves really are working hard to become the whiniest, most unlikable team in all of baseball.

If they weren't already.