How Roberto Hernandez Has Given Up Fewer HR in 2014

Roberto Hernandez has seen improved performance in 2014 by cutting down on his use of breaking pitches.

Share All sharing options for: How Roberto Hernandez Has Given Up Fewer HR in 2014

Despite mediocre surface numbers in 2013, peripheral numbers, most notably his (hopefully) unsustainably high 20.9 HR/FB%, suggested that Roberto Hernandez was probably a capable major league starter. Although his 2013 ERA was an uninspiring 4.89, ERA-estimators told the story of a much better pitcher. While FIP only saw Hernandez as a 4.12, SIERA and xFIP took a rosier view of Hernandez setting his performance at 3.59 and 3.60, respectively.

As is common with SIERA and xFIP, which both significantly regress a pitchers HR/FB rate toward league-average, perhaps the biggest unknown regarding the prospects for Hernandez in 2014 was whether that rate would actually regress. Perennially misled by Joe Blanton's optimism-inducing peripherals, many Phillies fans unsurprisingly questioned the ability of Hernandez to perform at the level at which his peripherals indicated he was capable.

Luckily for the Phillies, 2014 Hernandez has produced more in line with his 2013 peripherals than his surface statistics. Through a sample, albeit a small one, of 39.2 innings, his ERA sits at 4.08, which is in line with his FIP (4.12), xFIP (3.72), and SIERA (3.85). This across-the-board harmony of ERA and its retrodictions has been a sight unseen for Hernandez since his 2010 season in Cleveland.

The most likely explanation of this alignment of surface and underlying performance is a regression in Hernandez's HR/FB rate. In 2013, Hernandez posted a 20.9% HR/FB compared to a career 12.5% mark. So far in 2014, that rate has been more in line with his career mark, sitting at 14.3%.

This drop inspires the question: has Hernandez made any changes that may have caused him to give up fewer HRs?

Answer: maybe. Early numbers suggest that Hernandez has altered his pitch selection in 2014. In both 2011 and 2013, the last two seasons in which Hernandez has topped 150 IP, opposing hitters have crushed his breaking pitches, predominantly his slider, as evidenced by the graph below: 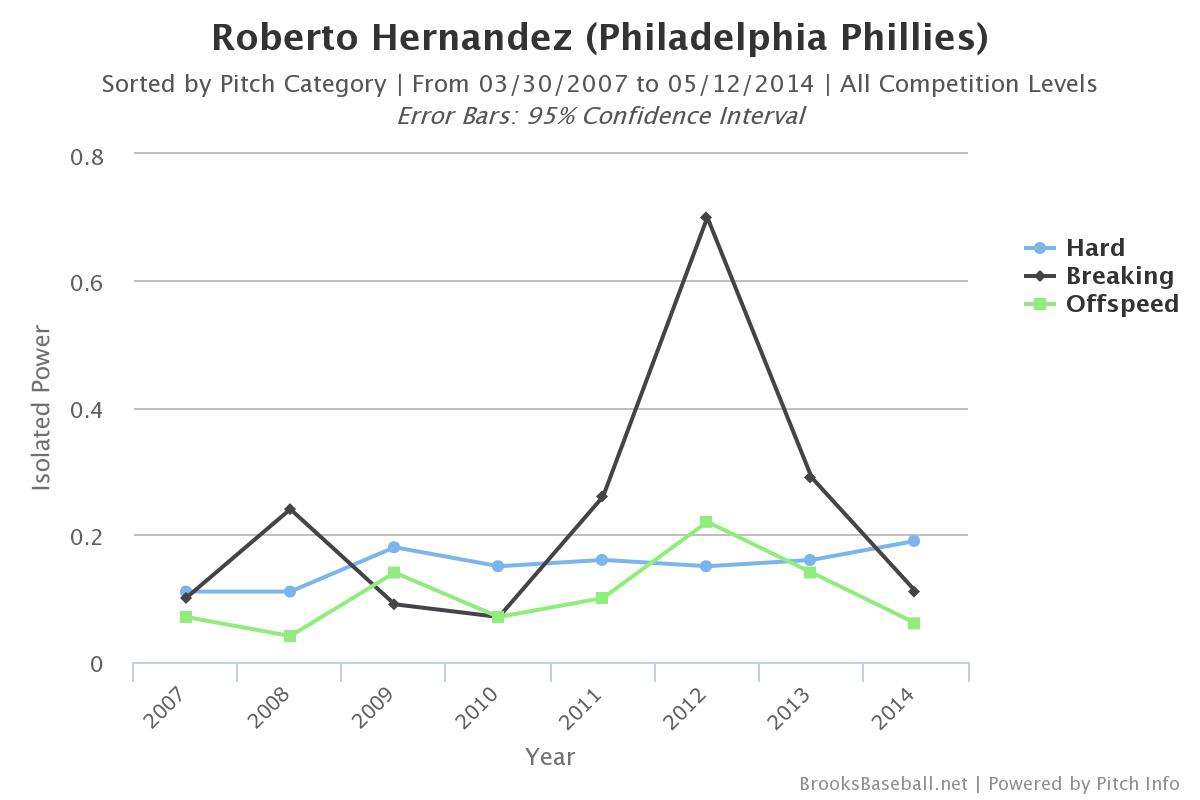 It may be common sense, but as a major league pitcher, if one of your offerings is consistently getting hit harder than the others, a quick way to improve your performance might be as simple as throwing said pitch less often. Thus far in 2014, it appears Roberto Hernandez has done just that and has experienced better results because of it.