Yasiel Puig has been even better than in his rookie year, and Clayton Kernshaw is coming off a rough start but still looks as tough as ever. 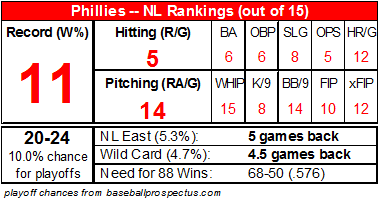 The Phillies remain tied for 4th with the Mets, while LA is 2 games over .500 and 4.5 games behind the Giants.

The Dodgers have tended to feature very good pitching, and at best enough decent hitting to get by, partly due to their pitching-friendly home park. That's not the case this year, when they've been one of the best hitting teams in the league, while their pitching overall has been around the middle of the pack.

By the way, the Pirates are the only NL team to get negative fWAR from their pitching overall so far this year, at -0.3 The Phillies are 8th with 2.7 fWAR. 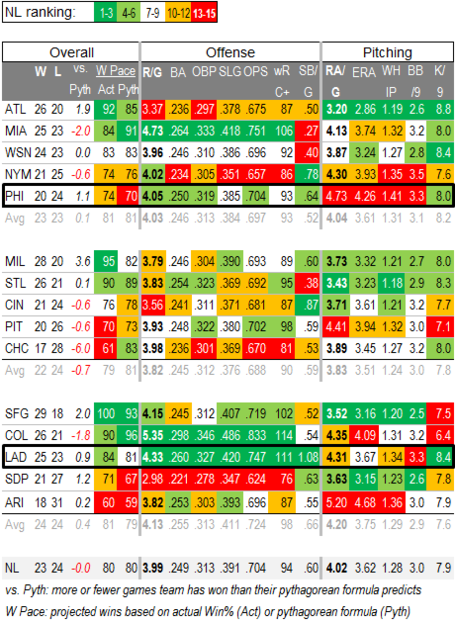 Phillies Team Stats vs. 2013 and vs. the Dodgers

How odd: the Phillies start the season by leading the league in walks for the first 2 weeks, then drop all the way to last for the next 2 weeks, and then lead the league again over the last 3 weeks:

Including that substantial improvement in walks, as well as stolen bases, the Phils are better than last year in almost every aspect of the offense. The only major exception is power, which has been the same as last year, with 11% fewer home runs, but 19% more doubles and triples.

The Dodgers are near the top of the NL in every major hitting category (along with Colorado and Miami). In addition, they lead the league in stolen bases, as well as steal attempts.

Yasiel Puig has the 5th highest fWAR in the NL MLB, despite negative ratings in both baserunning and defense. With a .331/.423/.607 line (190 wRC+), the 23 year old outfielder is improving on his rookie season and has been one of the elite hitters in the game so far.

Regardless, the Phillies should sweep the series, since Juan Uribe is on the DL. 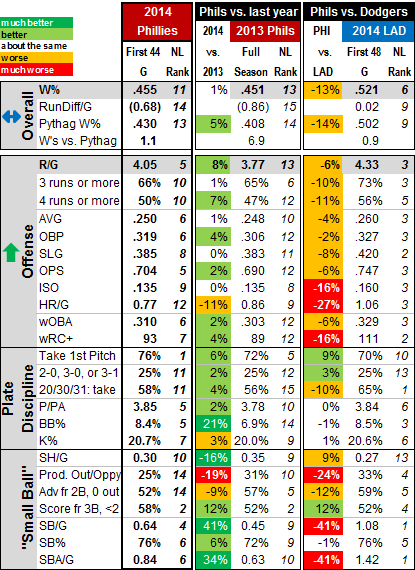 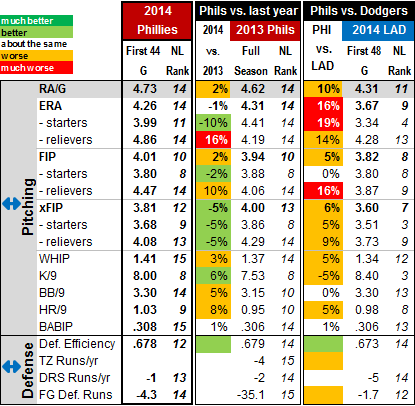 The Phillies have had some of May's best hitters in the NL so far (by wRC+):

At the other end of the spectrum, the Phillies also have the NL player with the worst fWAR in the month, Dom Brown at -0.5. And the 9th worst, Ryan Howard (-0.3). That's among the 90 qualifying hitters; Lyle Overbay is at -0.7 but with too few PAs. 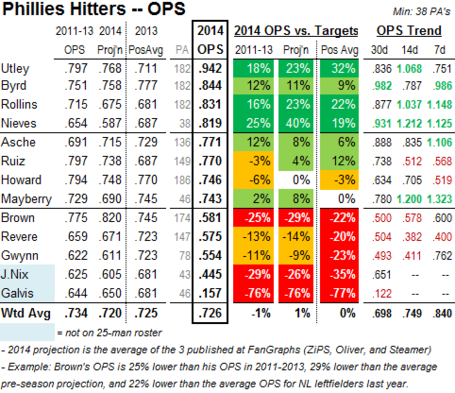 1991: Tommy Greene pitched a no-hitter to beat the Expos 2-0. It was only his 15th major league start. The Expos lineup featured Delino DeShields, Larry Walker, Andres Galarraga, and Marquis Grissom.

1952: Pitcher Curt Simmons hits an inside-the-park home run against the Pirates, the last time a Phillies pitcher accomplished that feat.

1935: In the first night game in major league history, the Phillies lose to the Reds 2-1 at Crosley Field

2009: Mariano Rivera throws a scoreless 19th inning against the Phillies at Yankee Stadium. It's his last [regular season] appearance against the Phillies; as he's the last player allowed to wear number 42, from this point on, no individual player wearing number 42 will play in a Phillies game.

Mike Schmidt is now 16 hits away. At his season's rate of just over one hit per game, Rollins is projected to reach him around June 7th while in Cincinnati. If that turns out to be about right and he's close towards the end of that series, he will undoubtedly be rested to make sure he passes Schmidt at home. 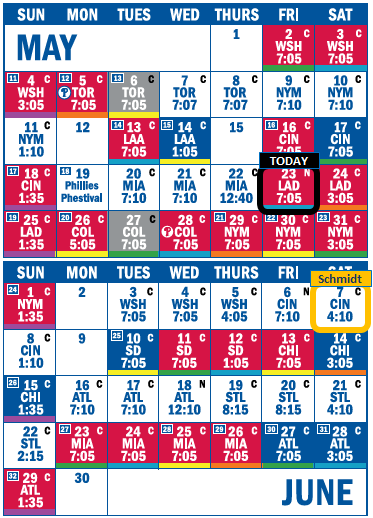 We haven't mentioned Chooch on these milestone reports, but he has quietly moved into the Phillies' all-time top ten in a couple of caregories: