First, let's get the facts out of the way: veteran Dodgers righty Josh Beckett no-hit the Phillies Sunday in LA's 6-0 victory, the first nine-inning no-no inflicted on the club since Bob Forsch of the Cardinals did it on April 16, 1978. He beat his former Marlins teammate A.J. Burnett, who gave up 11 hits and six runs, four earned, in seven innings of work. The Dodgers put this away in the first inning, when Dee Gordon singled, stole second and scored on an Adrian Gonzalez hit; Justin Turner added a solo homer an inning later.

Between a leadoff walk to Marlon Byrd in the second inning and a two-out walk to Jimmy Rollins in the ninth, Beckett retired 23 straight Phillies batters. He finished the no-hitter on 129 pitches, after having thrown 54 through the first three innings.

And now, a little flavor. You usually see two things when a guy throws a no-hitter: dominant stuff, and at least one oh-wow defensive play without which the pitcher's great work would have translated merely to a win, perhaps a shutout. The striking thing about Beckett's no-no was that he neither dominated--he struck out just six on the day, with a good but not overpowering fastball and an effective curve he didn't really use that much --nor was bailed out by any defensive wizardry. In fact, the only particularly hard-hit ball was a Domonic Brown flyout to the warning track in the fifth inning.

Yet the Phillies were so lifeless offensively that once Beckett got through the fifth, it seemed he was more likely to leave with a too-high pitch count than because the Phillies reached him. But very quick innings through the sixth, seventh and eighth had him taking the mound with just 110 pitches to start the ninth.

Beckett retired pinch-hitter Tony Gwynn Jr. and Ben Revere with relative ease. But Jimmy Rollins--who for all the springtime carping has played harder and smarter than anyone else on the team, with the possible exception of his keystone partner--worked a full count, then laid off a slider to draw the walk. Beckett was up to 123 pitches, with Chase Utley coming to the plate.

Utley had swung first-pitch fastball in his previous two at-bats, without good result. He got ahead 2-0 and 3-1... then looked at a borderline curveball for strike two, and a fastball at the knees to complete the masterpiece.

So what does this mean? And might it be a good thing?

Hear me out. It's becoming increasingly clear that this 2014 Phillies club will end about as badly, and perhaps even worse, than its predecessor. Through the first month-plus of the season, the team played in great health and even better luck: despite a run differential among the worst in the game, they bobbed around the .500 mark. As May has stretched on, the losses have mounted, and now the injuries are as well, with Cody Asche following Cliff Lee to the disabled list. All this for a club-record $180 million in payroll. The only logical course is to burn this rotten thing to the ground and start building anew.

Normal failure might not be enough to move the mushy-headed rich guys in the owner's suite, however. They're still probably making money--not as much as in the 2008-2012 glory years, but still--and their loyalty is legendary. But embarrassment, as well as some salutary pressure from the suits at Comcast, could push them to do what's necessary. Getting no-hit by a guy who wasn't exactly looking like Nolan Ryan, in front of a large crowd on a beautiful holiday weekend Sunday, might provide a useful nudge.

Fangraph of the Receiving End of History: 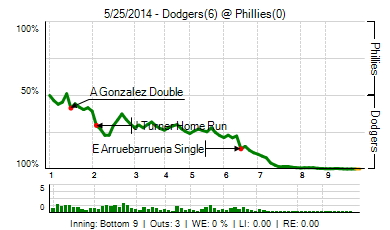