In which we rank the general enjoyment/inconvenience of possible baseball weather conditions. Because, you know, we basically live in weather, so it's important stuff. This is science, folks.

This week's edition: Ranking the best weather* conditions in which to play the sport of baseball.

* Weather is used herein the way the Air Force uses it, meaning it covers everything including time and anti-aircraft missiles.

1. Midnight in Fairbanks, Alaska - Sorry, rest of the country, but you lose. The Alaska Goldpanners' annual Midnight Sun Game begins at 10:30PM on June 21st, and is played entirely without the lights. Of course, the joke being that the lights don't work at Growden Park, but still. The MSG has been a tradition in the Interior since 1906, originally between local club teams, but since 1960, has featured the Goldpanners hosting another team.

The game has featured teams ranging from the Taiwanese National Team (lost due to forfeit when it got dark) to the University of Arizona Wildcats (won 4-3) to the vaunted Radio Station club (Radio Station won 5-2 over Sawmill in 1925). 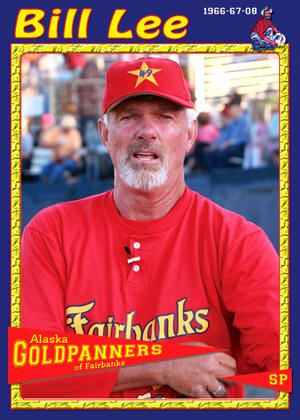 2. Saturday nights, partly cloudy, 75 degrees - It doesn't get much better than this. Scattered clouds make for fun shadows and help keep the sun from being overpowering, 75 degrees is the perfect middle ground between too hot for me and too cold for people who don't live in the subarctic, and Saturday nights. Just perfect.

3. 9AM starting time - These are fun. Of course, these are only possible due to the awesome power of the Time Cube, which allows timezones to be manipulated for fun. Seriously, though, check that out.

These games are great because, well, who doesn't like to eat breakfast while watching baseball?

Yeah, like, so you know hittin' weather is like when it warms up outside and stuff, and guys just like get in their groove and can drive the ball the way the like try to do, you know, and like Piece is up there hittin' and stuff and you can tell it's hittin' weather like 'cause he just gets the bat on the ball and get runners in like and things like that.

Thanks Chuckles. That sounds pretty good.

5. A forty degree day - I'm gonna go to the cloud for this one as well. String?

That's good. That's like a forty degree day. Nobody got nothin' to say about a forty degree day. Fifty, bring a smile to your face. Sixty, shit, fans is damn near tailgatin' in that mothafucka. Go down to twenty, players get their bitch on, get they blood complainin'. But forty? Nobody give a fuck about forty. Nobody remember forty, and ya'll players is givin' way to many forty degree days what the fuck!

Thanks String. Say, have you ever thought about giving up that life of crime to manage a baseball team? Well, some would say that's the same thing around here... I'll show myself out.

6. Snow - Ok, so, I have to confess. I fucking love snow. Of course, I live in a glacier, so maybe that's wise, but still. And I once played baseball in the snow. Seriously. 16 years ago, some friends and I got a group of players together on a warm January day, painted some balls with orange paint, and played a game. We had to call it quits after like two innings because even with the paint it was a chore finding hit balls, but still.

But snow doesn't really jive with Major League Baseball. Not at all. Seriously. Look at this dude. Fucking skis? Are you serious? How's he gonna cover first on a grounder to the right side? 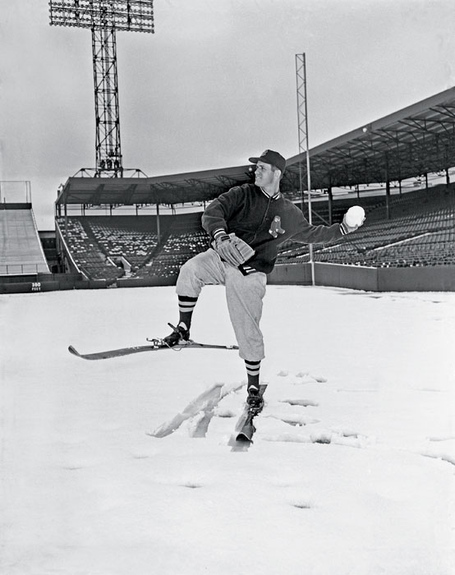 7. Raining Sideways - As bad as snow is, you can usually count on it to move in a generally vertical direction, losing altitude over time. It builds up on the field, causes delays and leads to pitchers donning their pitching skis, but other than that, snow is pretty harmless. But sideways rain? Man, fuck that shit. I mean, that's basically a hurricane, and no one wants to deal with a fly ball in a hurricane. Especially our crappy outfield. I mean, can you imagine Tony Gwynn Jr trying to track a fly ball in a hurricane? Let's turn to Scott Franzke for a moment:

Swing and a lazy fly to center. Gwynn settles under it, now he runs thirty yards to the right, now he comes in a step, runs to his left, plays hopscotch, moves in a few steps, runs towards the warning track, and, oh! Gwynn was crushed by a boat falling out of the sky! And fucking Scott Hairston turns at third and he'll score easily. Jesus Christ!

8. A plague of locusts - I've never actually seen a locust, but they sound bad. I'm pretty sure I'd not want to be in the general vicinity of anything resembling a plague of locusts. Wikipedia tells me that locusts are "powerful fliers," and OH HOLY CHRIST SOME SPECIES GREW TO SIX FUCKING INCHES LONG I'M NEVER LEAVING THE HOUSE AGAIN! *quickly orders 10,000,000 gallons of DDT from AmazonofPesticides.com*

Although, the bright side of a plague of locusts striking a baseball game would be that we'd never have to deal with Jonathan Papelbon again, so, maybe I shouldn't prejudge this too harshly.

9. Phoenix - I've never experienced mid-summer in Phoenix, but I can read numbers. The record high is 122 degrees. The average high in July is 106.1 degrees. The goddamn record low in the summer is 63 degrees! Think about that for a second. It has never in recorded history been cooler than 63 degrees in Phoenix in July. I can remember times when it's snowed at my house in July, and their record low is 63. Man. Fuck deserts.

Also, remember that if you're playing a game in Phoenix, you're playing the #GodBacks, who have the ability to use the Konami Code against the Phillies and score ninetybaconator runs. Fuck that too.