On Wednesday Rollins joined Schmidt as the only players to appear in 2,000 games in the history of the franchise. And the Mets come to town for an extended stay that will determine who gets bragging rights for 4th place in the NL East. 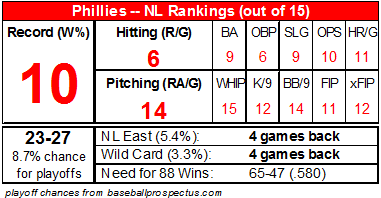 While the Phillies are only 4 games out of first place (and only 3 in the loss column), their playoff chances remain slim, at only 8.7%, based on the current roster's projected rest-of-season performance.

The Phillies remain tied for 4th with the Mets. Barring rainouts, one team will come out of this five game series with sole possession of 4th place (maybe even higher, depending on what the Nationals do).

NL East is Plenty Strong
The Win Pace columns below show that the NL East doesn't have any very good teams, but also that it doesn't have a very bad team for the rest of the league to beat up on.

The East at worst has been the middle of the three divisions so far (with the West a bit better and the Central a bit worse), although they're really too close at this point to draw any clear distinctions. 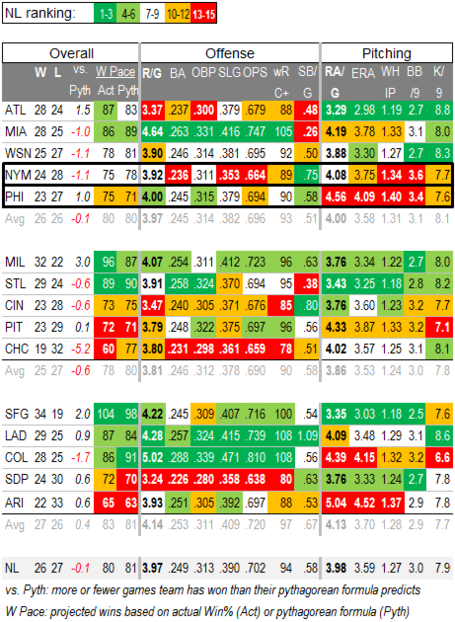 Walk this way
The Phillies continue walking well, and lead the NL in BB% for the month of May after a brief lapse in late April:

They also now lead the NL in both taking the first pitch (76% of the time), and in the number of pitches they see per plate appearance (3.88).

Bats heating up?
Since May 17th (11 games for most teams), the Phillies are 2nd in the NL in OPS, and lead the league in both scoring and home runs. 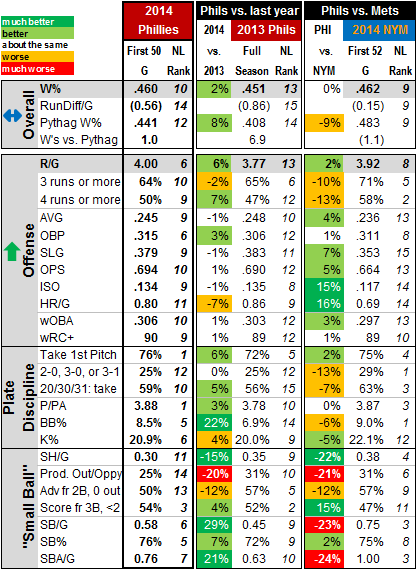 Mets
The Metropolitans are near the top of the NL in a couple of categories:

- plate discipline, including the highest walk rate in the league
- base stealing, ranking 3rd in both stolen bases and the number of attempts

In spite of that they are at best average in most key categories, including the only stat that matters in the end, runs per game.

Importantly though, while they've scored somewhat fewer runs than the Phillies overall, they've been more consistent in their scoring from game to game, and so they've had fewer games with fewer than 3 runs (29%, vs. 36% for the Phils), and also fewer high scoring games of 6+ (21% vs. 30%). The Mets have scored between 3 and 5 in half of their games, higher than the NL average (41%), and much higher than the Phillies (34%): 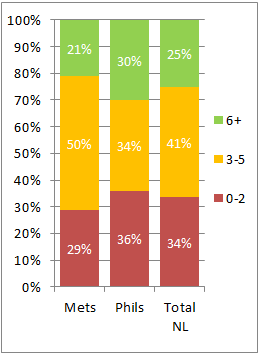 The Mets are in the middle of the pack at best in their key pitching stats (and below average in most). Fielding appears to be at least average though, and maybe better: 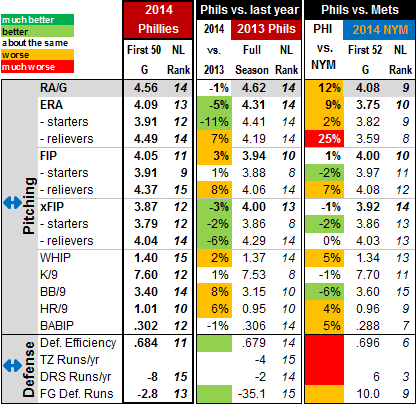 Ks on the Rise

Note above that Phillies pitchers are striking out somewhat more hitters than they did a year ago (up 1% from 7.53/9 IP to 7.60/9), but their ranking in the NL has fallen from 8th to 12th.

That's because the K rate in the NL overall has risen to 7.86/9, a whopping 5% increase over last year, and the highest it's ever been: 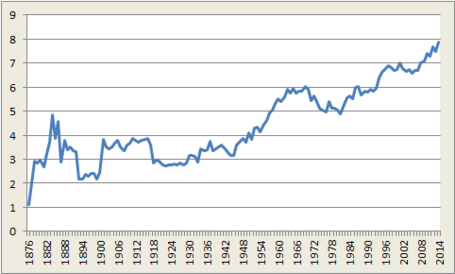 May
The Phillies hitters who had been hottest in the month of May (Rollins, Byrd, Asche) have cooled off more recently, and the Phillies leading hitter for the month as it nears its end is again Chase Utley (after tearing it up in April).

Dom Brown barely escapes the very bottom at the moment, ranking just ahead of Danny Espinosa for 85th out of 86 qualifiers in the month.

vs. Expectations
After Ben Revere's recent spurt, Brown also stands alone among the starters in the table below. While everyone including Revere is now above, or at least close to, their 2011-13 average OPS and 2014 projections, Brown continues to struggle mightily, with a 7-day OPS that's trending even lower. 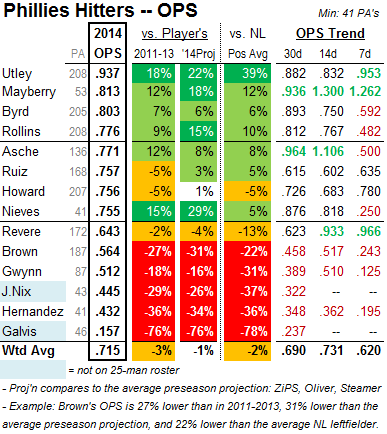 1989: Michael Jack Schmidt announces his retirement in an emotional farewell speech. He had hit .203 for the season--his lowest average since his rookie year

2010: Roy Halladay sets down all 27 Florida batters, completing the 20th perfect game in major league history. The Phillies scored the game's only run on an error by Florida's Cameron Maybin.

1983: Through the first 7 innings against Montreal, Mike Schmidt had struck out 4 times (each time on only 3 pitches) and made a throwing error from third base. With one on in the bottom of the ninth, he hit a 2-run home run to seal a 5-3 victory for the Phillies.

1935: Phils pitcher Jim Bivin gets Babe Ruth to ground out in his first at bat. Ruth then left the game against the Boston Braves, ending his major-league career

2009: Ryan Howard hits 2 home runs, including a grand slam into the 3rd deck at Citizens Bank Park, in a 9-6 Phillies win over Washington. The slam was the 8th of his career, tying Mike Schmidt's team record for most career slams by a Phillie.

With Delahanty and Ashburn behind him, Rollins is now bearing down on Mike Schmidt's franchise hits record, and he should reach it in about two weeks, during the next homestand.

If he does reach Schmidt on June 12th (as he is projected to), chances are he would pass him on the 13th, which leaves him only two games' wiggle room to set the record at home before they go on the road for a week. 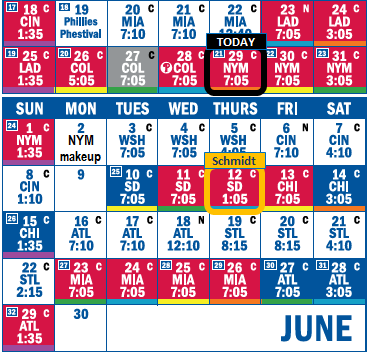