Domonic Brown Loves Fastballs Too Much

How much does he love fastballs? So much he doesn't want to hit them for fear he might hurt them. But why then does he keep swinging?

Share All sharing options for: Domonic Brown Loves Fastballs Too Much

Hi, all. It seems I've been called up from the minors. I'd just like to say how excited I am for this opportunity. I'm really trying to soak in the atmosphere and learn from the veterans. I'll do whatever I can to help the team. And I hope everything works out.

For my first article on TGP I thought I'd show you guys how I incorporate advanced stats into how I watch games. I'll do this by drilling down into Domonic Brown's struggles this season. We all know something is wrong with his approach or swing. His results make this patent. A number of bloggers have already commented on what's wrong and what he should do to fix it. Our own John Stolnis has argued to let him work through his struggles in the lineup. Corinne Landrey has encouraged us to have patience and wait for his batted ball types to regress toward his usual distribution. And Bill Baer has lobbied that Dom pull the ball more. To some extent I agree with all three writers. But we can take their analyses further. Lying behind Dom's struggles is a peculiar inversion of last season's breakout: Dom Brown is getting blown away by fastballs. Why? What has changed? The answer to this question will give us something to watch for in the coming weeks and months.

Let's start with some of the peripheral stats that show us how Dom has struggled this season compared to last. Here's a handy table:

*P(FA) refers to fastballs seen by Dom. Cutters are not included as fastballs for the purpose of this article.

In 2013 Dom profiled as a typical power hitter. He hit the ball in the air. He didn't make a lot of contact with pitches he couldn't drive. And he was especially productive against fastballs. In 2014 Dom Brown profiles as a slow version of a traditional 2-hole hitter. He is hitting the ball on the ground, making contact with a lot more balls that he can't drive, and getting dominated by hard stuff. The last three columns show that pitchers are throwing Dom more fastballs, Dom is swinging through more of them, and his run production has fallen well below average. I find this change the most interesting. Pitchers are beating him with fastballs. But so far we are only looking at results. What about Dom's or the pitchers' processes have changed between 2013 and 2014? Is it simply that pitchers have found a hole in Dom's swing? Or has Dom himself changed his approach such that he is now weak against fastballs? The answer, of course, is a little bit of both.

To analyze the changes in how Dom is being pitched and how Dom approaches his plate appearances we need to look at where he is being pitched, when he is swinging, and what happens when he swings. For this analysis I'll use the pitchF/X data from Brooks Baseball. We'll first look at where in the strike zone pitchers have tended to throw their fastballs to Dom in 2013 and 2014. 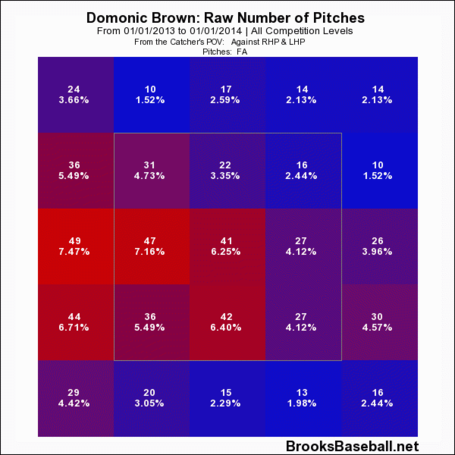 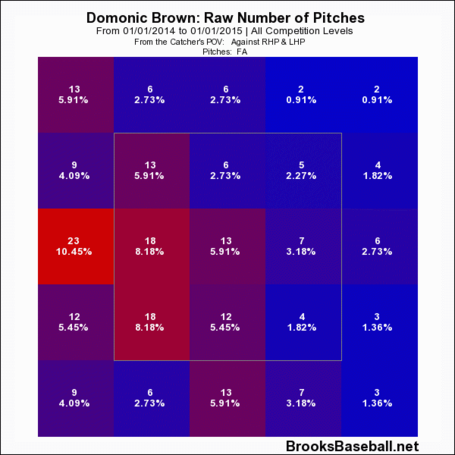 As you can see in the images, pitchers have moved their fastball locations further away from Dom. They now pound the outer third of the plate and beyond. In particular, they throw over 1/4 of their fastballs to 3 sub-zones: middle-away, low-away, and middle-away-off. It seems MLB pitchers are exploiting the hole in Dom's swing we all noticed last year. And this adjustment has been well documented at Crashburn Alley. But we might have expected Dom to be better equipped to attack pitches middle-away and low-away. For his career Dom has a .250 ISO on pitches middle-away and a .429 BABIP on pitches low-away. Both of those numbers are good. In fact, Dom's highest BABIP on pitches in the zone comes on pitches low-away. We might have thought that Dom would start guessing on fastballs away, diving out, and driving those pitches. But he hasn't been able to do that, even though he has seen even more fastballs this season than last. Instead, we've seen him roll over on ground balls to the right side and fly out short of the left field fence.

Has Dom changed his approach in light of the pitcher's adjustments? Let's check his swing rates to see whether he has changed the frequency of his swings at fastball locations this year. 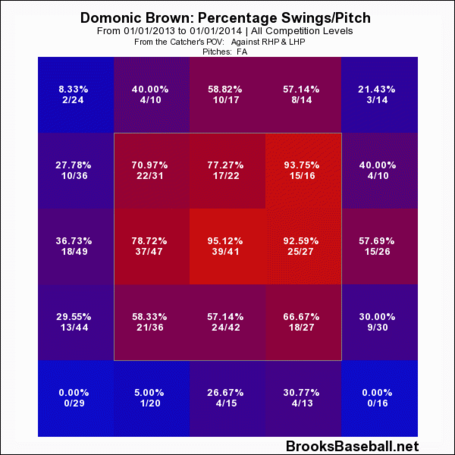 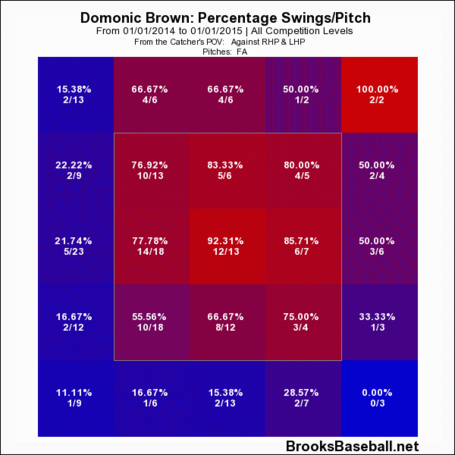 As you can see, Dom's swing profile against outside fastballs has not changed much, if at all, since last season. (Indeed, most of the fluctuations in the percentages we see throughout the strike zone here are most likely due to the small number of pitches thrown in those areas.) If anything Dom has shown a sharper eye, laying off a higher rate of pitches off the plate outside. We should not be surprised that Dom has become more discerning of outside pitches as they have been thrown to him more often. After all, he has always had a great eye. And even when he struggled to hit in his first couple of appearances in the bigs, he still managed to walk at an above average rate.

However, his improved discipline has not translated into a better walk rate. In fact it is more or less the same as last season. Moreover, he is swinging at a higher rate of pitches out of the zone this season. Although he might be chasing a higher rate of only offspeed and breaking pitches, we see a few concerning sectors outside the strike zone. Dom is swinging at more high fastballs across the the board. Dom has swung at 13 of 29 fastballs high and out of the zone. He's made contact with 4. So far, swinging at fastballs high and out of the zone has not paid off. If this indicates a change in Dom's approach--if, say, he is trying to attack pitches up in the zone because he is having trouble driving pitches away--then he should rethink this approach. Not only has he struggled to make contact with those pitches this season, he has never in his career managed to get a hit on a pitch above the regulation strike zone. Dom just is not a high fastball hitter. His long arms make it difficult to keep the bat on the same plane as the ball when it is so high; there is only so much space for him to cram his elbows when his arms are up around his shoulders. He should just lay off those high fastballs. If this means that he lets a few high strikes get by him, then so be it. He can master other parts of the zone. From here on out, I'm going to look for Dom to be more patient with high fastballs. I'll root for him to spit on 'em and wait for the pitcher to come back down to him. Of course, this change would be just one in a number of changes he needs to make to become even a league average hitter again (he's currently at a 47 wRC+!).

For this whole season, I--and you too, I bet--have been looking for Dom to take the next step, but he has failed spectacularly. There are probably many conspiring causes for his failure. Eric Longenhagen thinks Dom is extending his arms too early and causing his swing to be long. Dom might have been playing through a tight back all season, although he has only recently complained of spasms. He might have altered his swing in order to hit the ball the opposite way more and, by doing so, reduced his pull power. These are all possible causes that I have not explored, and there are plenty others. Dom is as always a fascinating athlete and often not for good reasons. Here I just wanted to point out one of the conspirators in his failure so far this season and a way to root for him going forward. Dom has struggled against high hard stuff while at the same time attacking it more. From now on let's roar, clap, and cheer whenever he lets them go by.