Share All sharing options for: When You're 8, Cody Asche's an All-Star: Blue Jays 6, Phillies 5 (10 innings)

It's hole-punching time in America, that time of year when we hearken back to 1970s-era computer-punch card technology and fill out our ballots for the All-Star Game in July in major league parks everywhere. For those of us experienced with spreadsheets and dog-eared copies of Bill James' Historical Baseball Abstract, however, it is as if our very nostrils battle with each other, past the pollen-thick air, for our eyes to look down past them upon it all.

And then we take our 8-year-olds to the ballpark, and as we set up the scorecard to track the game and check Twitter for the lineups, we find them casually punching the hole of every Phillies player on the card. And then you realize, hey:

And think, well, when I was 8, just forming my own baseball consciousness, I thought Dave Cash was pretty neat, too (and he was an All-Star, so there's that). Because Chase Utley was merely a gleam in his father's eye still two years away, I had no idea.

But now, of course, I'm much more sophisticated, and able to analyze an interleague game between the Toronto Blue Jays (my A.L. favorite since expansion) and the Phillies, thusly: 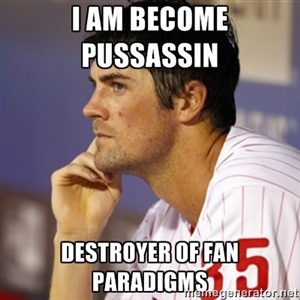 You just have to go out there and muck up the tenth inning with your patented implosion of bad luck, a wild pitch, and inducing sacrifice fly balls to the noodliest of noodle-armed outfielders.

But I digress. There were z-snaps aplenty:

Yes, sure. The Phillies lost the game in the tenth. But I could care less, and not because I am dispassionately divested of a team that, on the paperless spreadsheets of this bloodless age, seems destined to fail. I feel a kinship to these guys with every improbable win, as I'm on the wrong side of 40 and things take longer to heal.

No, I rejoice in the fact that tonight, I taught my boy how to keep score.

And after punching Cody Asche's ticket to the All-Star Game, his faith was rewarded (and given the fact that his aunts treated him to this game as a gift for his First Holy Communion, can it get better than this?)

It's like four home runs in one hit! pic.twitter.com/hFjtzA5KbF

No. And you can't put these things on a