Canada conquered the United States tonight, led by Edwin Encarnacion and his bombs.

The Blue Jays hammered the Phillies in this series. Just absolutely hammered.

Tonight's score didn't follow last night's pattern of overall decentness interrupted by an hour of eating a shit sandwich, instead the Phillies pretty much ate shit sandwiches all evening. AJ Burnett was tagged for seven runs in six innings, allowing nine hits and two walks and striking out four. Three of his hits were homeruns, and all fifty were hit by Edwin E5 Encarnacion.

After Burnett's night was gruesomely bluejay'd, Ryne Sandberg went to newly recalled righthander Luis Garcia for the seventh. Garcia fared little better than Burnett, and was tagged for five more garbagetime runs, on four hits and a walk. He struck out two, somehow, and allowed another pair of homeruns, all ninetysix of which were hit by Encarnacion.

Encarnacion has now hit 12,000 homeruns in his career, all off the Phillies.

The Jays' knuckleballer R.A. Dickey held the Phils to two runs on six hits and three walks, striking out eight. In the seventh, Toronto turned the game over to the best bullpen in Canada. Lefty Aaron Loup and righthander Marcus Stroman buns and rolls kept the Phils scoreless until the ninth, before Garbageman Esmil Rogers came on to "close it out." Rogers allowed three meaningless runs on a pair of hits and a walk, striking out two.

This game pretty much sucked. Designated Hitter Jimmy Rollins, Chase Utley and Marlon Byrd each had a pair of hits, each with a double, and Utley's first triple of the year. Ryan Howard hit an opposite field homerun.

Freddy Galvis went 0 for 3, and after the game was optioned to Little League.

Cody Asche went 0 for 3, and will likely be benched for the next seven hundred years.

Jayson Nix went 0 for 1 in garbagetime and will likely be named the starting third baseman for the Phils.

This game (and series) was horrible, and I can't really justify the electrons needed to write more words.

The loss drops the Phils to 15-18, which is coincidentally where they were last year. 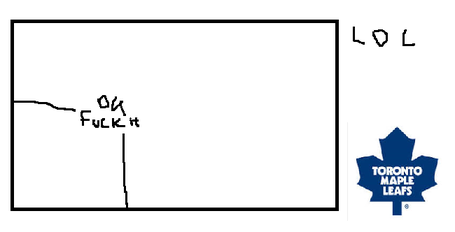