...we hope. The "Bad News Phillies" look to reverse their recent fortunes at Citi Field, as the back end of the rotation and a so far less than ace-like Cole Hamels take on the Mets.

Share All sharing options for: Phillies Stat Notes: Bad News for the Mets 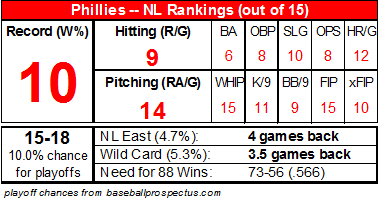 With the season about 1/5th complete, the Phillies are hanging on to a 10% chance of making the playoffs.

The intent of the Stat Notes posts is to show how the Phillies are doing in ways that aren't easily found elsewhere.

Using the Phillies' run-differential, their pythagorean record is only 13-20, and would project to 65-97. They've played almost 2 wins above that so far. 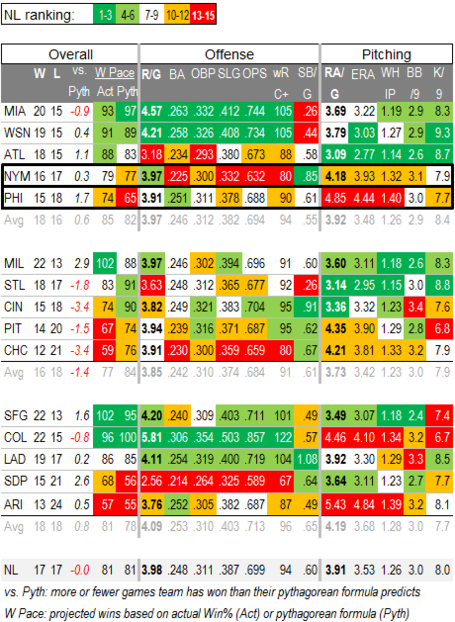 The Phils' walk rate has rebounded over the last week:

With their recent struggles, the Phillies' hitting and scoring for the season to date are now looking more and more similar to last year's stats, and most high level numbers, with the exception of Isolated power and home runs, are within 4% of those of 2013.

The Mets have scored about the same as the Phillies, averaging 3.97 per game to the Phils' 3.91, both of which are around league average. The Mets have managed to score that much despite being near the bottom in most major categories (they do have a relatively high .255 average with RISP). They've also been quite consistent in their scoring, ranking near the top of the NL in the % of games in which they score 3+ or 4+ run. 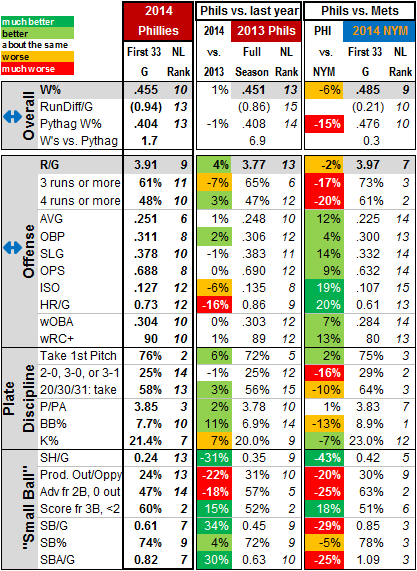 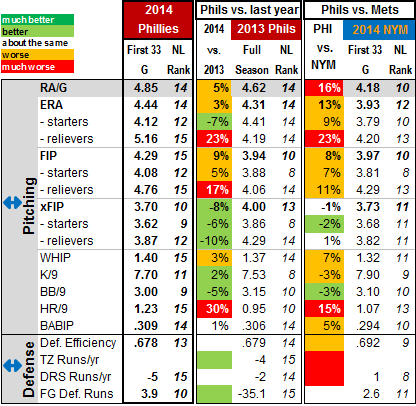 While Byrd has heated up:

And so has Chooch: 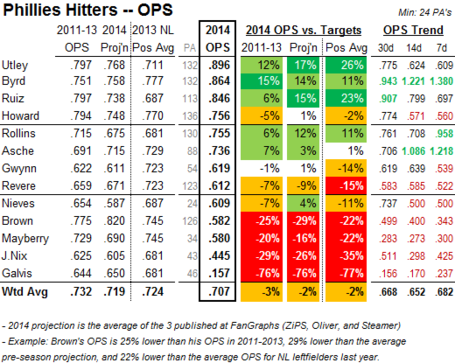 Gwynn and Revere have a similar OPS, but this is a case where wOBA shows somewhat more separation:

But the big difference between the two is how they get to those similar hitting values:

Wait -- isn't "a walk as good as a hit", meaning Gwynn's much higher OBP would translate into a much higher wOBA? Many times, yes, particularly when leading off an inning. But even leadoff hitters don't start off innings all that often. The linear weights assume that a single, on average, is worth about 29% more than walk. So when we break down how much of their wOBA each player gets from what type of hitting, Gwynn's huge lead in OBP only gets him a relatively modest advantage in wOBA: 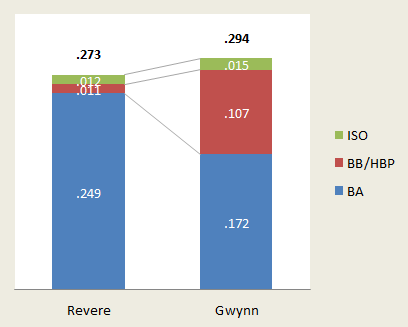 According to the Phillies Media Guide, Rollins is only one hit away from tying Ed Delahanty for 3rd most hits in Phils history. The Media Guide shows Delahanty with 2,207 hits while with the Phillies. All other available sources, however, show higher totals:

We'll go by the 2,213 number here, giving some extra weight to mlb.com:

At the moment he is projected to pass all three during home stands, but those projected dates will move around depending on how he does in the coming weeks. 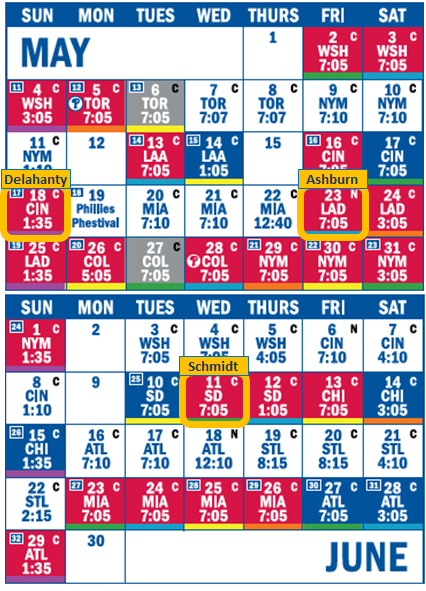